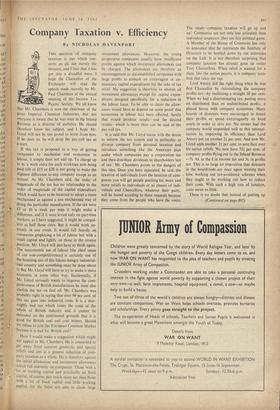 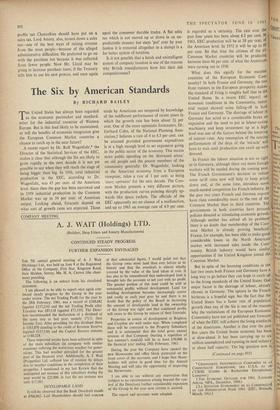 THIS question of company taxation is one which con- cerns us all, not merely the investor, and I fear that it has got into a dreadful mess. I hope the Chancellor of the Exchequer will read the speech made recently by Mr. Paul Chambers at the annual

meeting of the Income Tax Payers' Society. We all know that Mr. Chambers is now the chairman of the great Imperial Chemical Industries, but not everyone is aware that he was once in the Inland Revenue as a director of statistics. He should therefore know his subject, and I hope Mr. Lloyd will not be too proud to learn from him. If he does so. he will drop the pay-roll tax as a start.

If this tax is proposed as a way of getting companies to mechanise and economise in labour, it simply does not add up. To charge up to 4s. a week extra for each workman now being paid £10 or £15 or £20 is not going to make the slightest difference to any company except as an irritant. As Mr. Chambers said, the order of Magnitude of the tax has no relationship to the order of magnitude of the capital expenditure which would have to be incurred to adopt a more mechanised as against a less mechanised way of doing the particular manufacture. If the tax were £5 or £6 a week per man it might make a difference, and if it were levied only on part-time workers, as I have suggested, it might be compul- sive at half those rates. But it would work un- evenly in any event. It would fall heavily on companies employing a lot of labour but with a small capital and lightly on those in the reverse position. Mr. Lloyd will just have to think again. The uneconomic use of labour (the chief cause of our non-competitiveness) is certainly one of the besetting sins of this labour-hungry industrial- ised country and something must be done about It. But Mr. Lloyd will have to try to make it more economic in some other way. Incidentally, if Mr. Lloyd seriously wants to improve the com- petitiveness of British manufactures he must also abolish the tax on fuel oil. Mr. Chambers was probably right in saying that over 90 per cent. of this tax goes into industrial costs. It is a thor- oughly bad tax which raises the costs of the whole of British industry and it cannot be defended on the sentimental grounds that it is good for British coal and coal miners. Should we refuse to join the European Common Market because it is bad for British coal?

Here I would make a suggestion which might not appeal to Mr. Chambers. He is concerned to get away from taxation gimmicks and special reliefs and aim at a general reduction of com- pany taxation as a whole. He is therefore against the initial allowances and investment allowances which fall unevenly on companies. Those with a lot of working capital and practically no fixed capital, of course, pay much more tax than those with a lot of fixed capital and little working capital, for the latter are able to claim large investment allowances. Moreover, the young progressive companies usually have insufficient profits against which investment allowances can be charged. The allowances are therefore an encouragement to old-established companies with large profits to embark on extravagant or un- necessary capital expenditures for the sake of tax relief. My suggestion is therefore to abolish all investment allowances except for capital expen- ditures designed specifically for a reduction • in the labour force. To be able to claim the allow- ances would have to depend on some proof that economies in labour had been effected. Surely that would produce results and the desired results-- which is more than can be said of the pay-roll tax.

It is said that Mr. Lloyd burns with the desire to reform the tax system and in particular to divorce company from personal taxation and introduce something like the American plan under which companies pay a corporation tax and then distribute dividends to shareholders 'net of tax.' Mr. Chambers points to the dangers of this idea. Once you have separated, he said–the taxation of indRiduals from the taxation of com- panies you will get people presMng for more and more reliefs to individuals or to classes of indi- viduals and Chancellors, whatever their party, will be found acceding to these requests because they come from the people who have the votes: The result—company taxation will go up and up! Companies are not only less articulate than individual taxpayers; they are fair political game. A Member of the House of Commons has only to announce that he represents the Institute of Directors to be howled down by our comrades on the Left. It is not therefore surprising that company taxation has already gone up under Tory Chancellors. When relief is wanted for a class, like the surtax payers, it is company taxa- tion that takes the rap.

Lord Amory did the right thing when he was first Chancellor by rationalising the company profits tax—by instituting a straight 10 per cent. When we had a discriminating tax, putting more on distributed than on undistributed profits. it played havoc with company economies. Many boards of directors were encouraged to hoard their profits or spend extravagantly on fixed assets in order to save tax. No sooner had the company world responded well to this rational- isation by improving its efficiency than Lord Amory put on another 21 per cent. And now Mr. Lloyd adds another 2-1 per cent. to save face over his surtax reliefs. We now have 53+ per cent. of company profits flying out to the Inland Revenue —7s. 9d. in the £ in income tax and 3s. in profits tax. This is so large an imposition that directors in the boardroom are once again wasting their time working out tax-avoidance schemes when they ought to be working out how to reduce their costs. With such a high rate of taxation, costs mean so little.

There is no doubt that instead of putting up -(ConhinrecI on page 892) profits tax Chancellors should have put on a sales tax. Lord Amory, alas, turned down a sales tax—one of the best ways of raising revenue from the most people—because of the alleged administrative difficulties. He preferred to go on with the purchase tax because it was collected from fewer people. Now Mr. Lloyd may be going to increase purchase taxes, if the Treasury tells him to use his new powers, and once again upset the consumer durable trades. A flat sales tax which is not moved up or down in an un- predictable manner but stays 'put' year by year (unless it is removed altogether in a slump) is a far better system of taxation.

Is it not possible that a harsh and unintelligent system of company taxation is one of the reasons why British manufacturers have lost their old competitiveness?