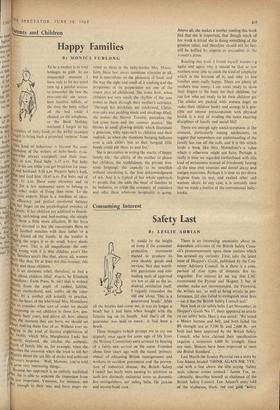 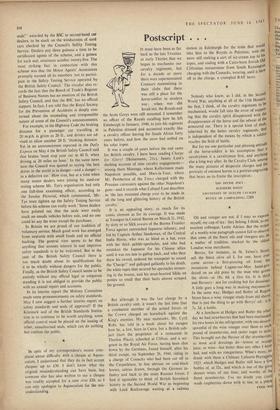 These thoughts (which prompt me to cry out urgently once again for some sign of life from the Molony Committee) were aroused by hearing of a fairly new arrival on the scene,. Founded about four years ago with the stated !primary

• object' of educating British managements and • workers in accident prevention and the preven- tion of industrial disease, the. British Safety Council has lately been turning its attention to such less distinctly industrial items as domestic

• fire extinguishers. car safety belts, lice jackets and second-hand cars. There is an interesting unanimity about in- dependent criticisms of the British Safety Coun- cil's pronouncements upon these matters which has. aroused my curiosity. First, take the latest issue of Shopper's Guide, published by the Con- sumer Advisory Council. In it there is a com- parison of nine types of domestic fire ex- tinguisher. For interest let me say that CAC recommend the Pyrene and Magnet 3, but of another make not recommended, the Fireward, the writers say, 'as well as being erratic in per- formance, [it] also failed to extinguish most fires —yet it has the British Safety Council seal.'

Now look at car safety belts. Last November, in Shopper's Guide No. 17, there appeared an article on car safety belts. Here it was stated: 'We tested a Masco harness and belt, and both failed the BS strength test at 3,100 lb. and 2,600 lb.—yet both had been approved by the British Safety Council, who have claimed their specification requires a minimum 4,000 lb. strength. Since our tests, Mascos have been improved to meet the British Standard. . .

Last March the Sunday Pictorial ran a story by Len Adams headed 'THINK AGAIN MR. TYE,' and with a line above the title saying 'Safety seals scheme conies unstuck.' James Tye, in- cidentally. describes himself as chairman of the British Safety Council. Len Adams's story told of the 'elaborate, black, red and gold "safety seals"' awarded by the BSC to second-hand cu dealers, to be stuck on the windscreens of used cars checked by the Council's Safety Testing Service. Dealers pay three guineas a time to be certificated agents of the scheme, and a guinea for each seal, minimum number twenty-five. The most striking fact in connection with this scheme was that the Motor Agents' Association promptly warned all its members not to partici- pate in the Safety Testing Service operated by the British Safety Council.' The circular also re- cords the fact that the Board of Trade's Register of Business Names has no mention of the British Safety Council, and that the BSC has no. official support. In fact, I am told that the Royal Society for the Prevention of Accidents is deeply con- cerned about the misleading and irresponsible nature of some of the Council's announcements.

For example, in the Highway Code the braking distance for a passenger car travelling at 20 m.p.h. is given as 20 ft., and drivers are ad- vised to allow another 20 ft. 'thinking distance.

Yet in an announcement reported in the Daily Express on May 4 the British Safety Council said that brakes 'must stop your car in 40 ft. when driving at 20 miles an hour.' in the same news item the Council was quoted as saying 'the best driver in the world is in danger—and a danger— in a defective car.' How true, but at a time when many motor dealers were joining his used-car testing scheme Mr. Tye's organisation had only one full-time examining officer, according to the Sunday Pictorial, which commented, 'Mr.

Tye must tighten up the Safety Testing Service before his scheme can really work.' Some dealers have pointed out that the seals were easily stuck on unsafe vehicles before sale, and no one could be any the wiser except the purchaser.

In Britain we are proud of our tradition of voluntary service. Much good work has emerged from ventures with small funds and no official backing. The general view seems to be that anything that arouses interest in and improves safety standards is to be welcomed. But in the case of the British Safety Council there is too much doubt about its qualifications for it to be wholly without dangers for the public. Finally, as the British Safety Council seems to be entirely without any official legal or corporate standing it is not obliged to provide the public with an annual report and accounts.

In its interim report the Molony Committee made some pronouncements on safety standards.

May I now suggest a further interim report on safety standards and seals of approval? If the Kitemark seal of the British Standards Institu- tion is to continue to be worth anything, some official control must be placed on the issuing of other, unauthorised seals, which can do nothing but confuse the public.

In spite of my correspondent's recent com- plaint about difficulty with a cheque at Aquas- cutum, I understand that they do in fact accept cheques up to £30. I don't know what the original misunderstanding can have been, but someone else has also written to say a cheque was readily accepted for a sum over £20, so I can only apologise to Aquascutum for the mis- understanding.