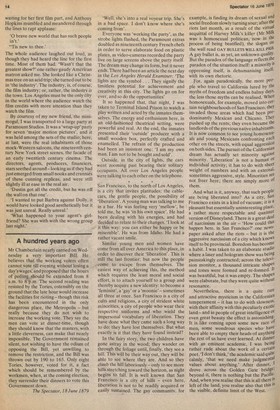 Mr Chamberlain nearly carried on Wednesday a very important Bill. He believes that the working voters often cannot vote till evening without losing a day's wages, and proposed that the hours of polling ,should be extended from 8 a.m. to 8 'p.m. The second reading was resisted by the Tories, ostensibly on the ground that the late hour would increase the facilities for rioting — though this risk has been encountered in the only dangerous place, the Metropolis — but really because they do not wish to increase the working vote. They say the men can vote at dinner-time, though they should know that the masters, with a little cleverness, can make that nearly impossible. The Government remained silent, not wishing to have the odium of opposing the Bill, yet unwilling to remove the restriction, and the Bill was thrown out by 190 to 165. Only eight Tories, however, voted for it, a fact which should be remembered by the workmen, when, at the coming election, they surrender their dinners to vote this Government down. 'Well, she's into a real voyeur trip. She's in a bad space. I don't know where she's coming from'.

Everyone was 'working the party', as the strobe lights flashed, the Paramount extras doubled as nineteenth century French chefs in order to serve elaborate food on plastic plates, as video-cameras recorded the party live on large screens above the party itself. The dream may change its form, but it never ends. There had been an article the next day in the Los Angeles Herald Examiner: 'The lights are the symbol . . . They signify the limitless potential for achievement and creativity in this city. The lights go on for ever, and so do the opportunities' It so happened that, that night, I was taken to Terminal Island Prison to watch a play written and acted by the inmates themselves. The energy and enthusiasm here, in an old-fashioned theatrical setting, were powerful and real. At the end, the inmates presented their 'outside' producer with a small wooden box, perfectly crafted and enamelled. The refrain of the production had been an insistent one: 'I am my own man. I am not to be bought and sold'.

Outside, in the city of lights, the cars went zooming past bearing their solitary occupants. All over Los Angeles people were talking to each other on the telephone.

San Francisco, to the north of Los Angeles, is a city that invites platitudes: the cablecars, the gentle people, the possibility of 'liberation'. A young man was talking to me in a bar. He was feeling very 'mellow', he told me, he was 'in his own space'. He had been dealing with his energies, and had decided to relate to their changes. 'I look at it this way: you can either be happy or be miserable'. He was from Idaho. He had a rather vacant smile.

Similar young men and women have come from all over America to this place, in order to discover their 'liberation'. This is still the last frontier: but now the people come to escape from themselves. The easiest way of achieving this, the method which requires the least moral and social effort, is to attach yourself to a group and thereby acquire a new identity: to become a 'feminist', a 'gay' or a `moonie' — sometimes all three at once. San Francisco is a city of cults and religions, a city of strident white minorities, a city of people who wear their respective uniforms and who wield the impersonal vocabulary of liberation. They have done what they came such a long way to do: they have lost themselves. But what exactly is it that they have found instead?

In the fairy story, the two children have gone astray in the wood; they wander on through the foliage until, finally, they see a hill. This will be their way out, they will be able to see where they are. And so they climb the hill laboriously — only to see more hills stretching toward the horizon, as night begins to fall. It is well known that San Francisco is a city. of hills — even here, liberation is not to be readily acquired or easily sustained. The gay community. for example, is finding its dream of sexual and social freedom slowly turning sour; after the riots last month, as a result of the virtual acquittal of Harvey Milk's killer (Mr Milk was a homosexual politican, now M the process of being beatified), the slogan on the wall read GAY BULLETS WILL KILL piGs. A gay bullet is, as yet, an unknown quality, But the paradox of the language reflects the paradox of the situation itself: a minority is oppressing itself, is dehumanising itself, with its own rhetoric.

For, again paradoxically, the more people who travel to California lured by the myths of freedom and endless balmy days, the less those myths can be realised. When homosexuals, for example, moved into certain neighbourhoods of San Francisco, theY invaded those areas which had been predominantly Mexican and Chicano. TheY pushed up the rents; they even became the landlords of the previous native inhabitants. It is now common to see young homosexuals and young Mexicans confronting each other on the streets, with equal aggression on both sides. The pursuit of the Californian dream has actually set minority against minority. 'Liberation' is not a human or individual activity; it has to do with sheer weight of numbers and with an external, sometimes aggressive, style. Minorities are not freer here; there are simply more of them.

And what is it, anyway, that such people are being liberated into? As a city, San Francisco exists in a kind of vacuum; it is a pleasant but essentially uninteresting place, a rather more respectable and quainter version of Disneyland. There is a great deal of narcissism in the air — 'How could this happen here, in San Francisco?' one newspaper asked after the riots — but it is the aggressive narcissism of a city which knows itself to be provincial. Boredom has become a habit. I was taken to an elaborate studio where a laser and hologram show was being painstakingly contructed; across the television monitor, a thousand intricate shapes and tones were formed and re-formed. It was beautiful, but it was empty. The shapes were elaborate, but they were quite without resonance.

Nevertheless, there is a quite rare and attractive mysticism in the Californian temperament — it has to do with slowness, with their affinity with this peculiarly exotic land—and in people of great intelligence or even great beauty the effect is astonishing. It is like coming upon some new race of men, some wondrous species who have been able to empty their heads of anything the rest of us have ever learned. At dinner with an eminent academic, I was being rather rude about the work of a certain poet. 'I don't think,' the academic said quite calmly, 'that we need make judgmental values about anything.' After dinner, drove across the Golden Gate bridge; beyond it, there is nothing but the PacificAnd, when you realise that this is all there is left of the land, you realise also that this is the visible, definite limit of the West.