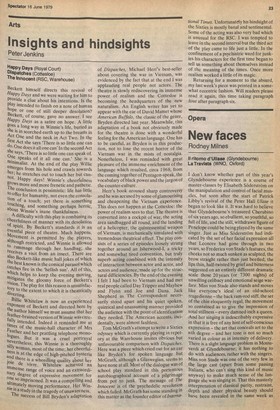 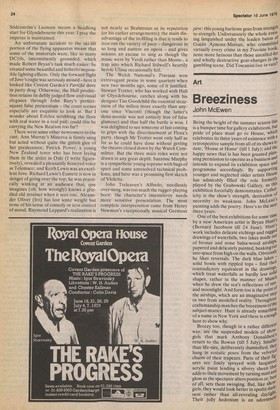 II ritorno (Glyndebourne) La Travlata (WNO, Oxford) I don't know whether part of this year's Glyndebourne experience is a course of master-classes by Elisabeth SOderstrom on the manipulation and control of facial muscles, but soon after the start of Patrick Libby's revival of the Peter Hall Ulisse it began to look like it. It was hard to believe that Glyndebourne's treasured Cherubino of six years ago, so ebullient, so youthful, so full of life, and the still, withdrawn figure of Penelope could be being played by the same singer. Just as Miss Soderstrom had indicated by the set of her facial expression all that Leonore had gone through in two years, so Frederica von Stade's features, the cheeks not so much sunken as sculpted, the brow straight rather than just beetled, the lips thin, half-twisted by grief and bitterness suggested on an entirely different dramatic scale those 20 years (or 7300 nights) of unwilling celibacy and emotional seige warfare. Miss von Stade also stands and moves like everyone's ideal of an old-school tragedienne — the back ram-rod stiff, the set of the chin eloquently regal, the movement so contained as to give the impression of total stillness — every damned inch a queen. And her singing is indescribably expressive in that it is free of any hint of self-conscious expression — the art that conceals art to the nth degree — and her tone is not so much varied in colour as in intensity of delivery. There is a slight language problem in Monteverdi at Glyndebourne; it has nothing to do with audiences, rather with the singers. Miss von Stade was one of the very few in the large cast (apart from some passing Italians, who can't sing this kind of music anyway) to make much sense of the language she was singing in. That this masterly interpretation of classical purity, restraint, depth and sheer physical beauty should have been revealed in the same week as SoderstrOm's Leonore means a headlong start for Glyndebourne this year. I pray the impetus is maintained.

An unfortunate accident to the ski-lift portion of the flying apparatus meant that some of the immortals were, like so many DC10s, intermittently grounded, which made Robert Bryan's task much easier: he created some beautiful and hitherto impossible lighting effects. Only the forward flight of Jove's eagle was seriously missed— here it looked like Covent Garden's Parsifal dove in party drag. Otherwise, the Hall production retains its deftly judged flow and visual elegance through John Bury's perfectsquare false proscenium — the court scenes especially are exquisite to look at. But I wonder about Ericlea scrubbing the floor with real water in a real pail; could this be carrying the New Realism too far?

There were some other newcomers to the cast: Ann Murray's Minerva is firmly sung but acted without quite the girlish glee of her predecessor; Patrick Power, a young New Zealand tenor who has been laying them in the aisles in Oslo (I write figuratively), revealed a pleasantly honeyed voice as Telemaco; and Keith Lewis was an excellent Jove. Richard Lewis's Eumete is now in danger of going over the top; he was practically winking at an audience that, one imagines (oh, how wrongly) knows a grizzled old retainer when it sees one. Alexander Oliver (Iro) has lost some weight but none of his sense of comedy or iron control of mood. Raymond Leppard's realization is not nearly as Brahmsian as its reputation (or his earlier arrangements); the main disadvantage of the in-filling is that it tends to iron out the variety of pace — dangerous in so long and austere an opera — and gives soloists an excuse to sing as though the music were by Verdi rather than Monte-, a trap into which Richard Stilwell's heartily heroic Ulisse occasionally fell.

The Welsh National's Traviata won extravagant praise in some quarters when new two months ago, some of it justified. Stewart Trotter, who has worked with Hall at Glyndebourne, catches along with his designer Tim Goodchild the essential sleaziness of the milieu more exactly than anyone since Visconti (though the latter's demi-monde was not entirely free of false glamour) and thus half the battle is won. I was delighted to see someone at last coming to grips with the divertissement at Flora's party, though Mr Trotter went only half as far as he could have done without getting the theatre closed down by the Watch Committee. But the three main roles were not drawn in any great depth. Suzanne Murphy is a sympathetic young soprano with bags of spirit and some unresolved technical problems, and here was a promising first sketch of Violetta.

John Treleaven's Alfredo, needlessly over-sung, was too much the rugger-playing boor: the character's insensitivity needs more sensitive presentation. The most complete interpretation came from Henry Newman's exceptionally musical Germont pere: this young baritone goes from strength to strength. Unfortunately the whole evening languished under the leaden baton of Guido Ajmone-Marsan, who committed virtually every crime in my Traviata book, none more heinous than those uncalled-for and wholly destructive gear-changes in the gambling scene. Did Toscanini live in vain?