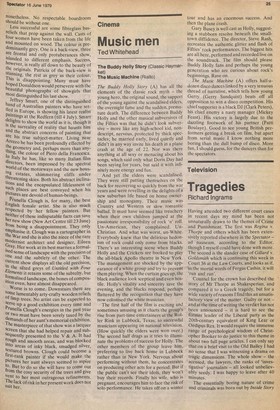 The Buddy Holly Story (Classic Haymarket) The Music Machine (Rialto) The Buddy Holly Story (A) has all the elements of the classic rock myth — the young hero, the original sound, the support of the young against the scandalised elders, the overnight fame and the sudden, premature death. The difference between Buddy Holly and the other musical subversives of the Fifties was that he didn't look subversive — more like any high-school kid, nondescript, nervous, protected by thick spectacles; he married early, lived quietly and didn't in any way invite his death in a plane crash at the age of 22. Nor was there anything at all sexy or menacing about his songs, which said only what Doris Day had been saying for years, but said it with infinitely more energy and fun.

And yet the elders were scandalised. They were still patting themselves on the back for recovering so quickly from the war years and were revelling in the delights of a new suburban life based on home ownership and monogamy. Their music was Country and Western or slow romantic ballad. It must have seemed like treachery when their own children jumped at the passionate irresponsibility of rock 'n' roll. Un-American, they complained. UnChristian. And what was worst, un-White. Everybody knew that the delirious hedonism of rock could only come from blacks. There's an interesting scene when Buddy Holly and the Crickets are booked to play the all-black Apollo theatre in New York. The management are shocked by the appearance of a white group and try to prevent them playing. When the curtain goes up, the black audience look sceptical and even hostile. Holly's vitality and sincerity save the evening, and the blacks respond, perhaps flattered by the recognition that they have now colonised the white musician.

The first half of the film is exciting and sometimes amusing as it charts the group's rise from part-time entertainers at the Roller Rink in Lubbock, Texas, to successful musicians appearing on national television. (How quickly the elders were won over.) The second half drags as it tries to illuminate the problems of success for Holly. The other members of the group leave him, preferring to live back home in Lubbock rather than in New York. Nervous about performing without them, he concentrates on producing other acts for a period. But if the public can't see their idols, they won't buy their records. Finally his wife, who is pregnant, encourages him to face the risk of solo performance. He takes off on a winter tour and has an enormous success. And then the plane crash.

Gary Busey is well cast as Holly, suggesting a stubborn resolve beneath the smalltown diffidence. The director, Steve Rash, recreates the authentic glitter and flash of Fifties' rock performances. The biggest hits are all here, performed and recorded live on the soundtrack. The film should please Buddy Holly fans and perhaps the young generation who are curious about rock's beginnings. Rave on.

The Musk Machine (A) offers half-adozen disco dances linked by a very tenuous thread of narrative, which tells how young Gerry (Gerry Sundquist) beats off all opposition to win a disco competition. His chief supporter is a black DJ (Clark Peters), his chief enemy a nasty manager (Mickey Feast). His victory is largely due to the dazzling footwork of his partner (Patti Boulaye). Good to see young British performers getting a break on film, but apart from serial music I know nothing more boring than the dull bump of disco. More fun, I should guess, for the dancers than for the spectators.