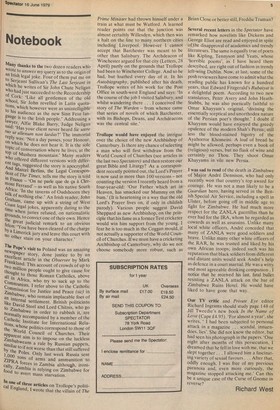 Many thanks to the two dozen readers wh'o wrote to answer my query as to the origin of an Irish legal joke. Four of them put me on to Serjeant Sullivan's The Last Serf cant in Which he writes of Sir John Chute Neligan who had just succeeded to the Recordership Of Cork: 'Like all gentlemen of the old school, Sir John revelled in Latin quotations, which however were as unintelligible 10 his audience as the new Sinn Fein language is to the Irish people.' Addressing a lawyer, Alfie Blake Barry, Judge Neligan said: 'Has your client never heard Sic utere tuo ut alienum non laedas?' The immortal reply was: 'Not a day passes, your Honour, on which he does not hear it. It is the sole topic of conversation where he lives, at the t°1) of Mushera mountain.' Many readers who offered different versions with different tags, suggested the story is apocryphal. And Marcel Berlins, the Legal Correspondent of The Times, tells me the story is told In France — 'On ne park que de ea a Clermont Ferrand' — as well as his native South Africa: 'In the taverns of Oudshoorn they talk of nothing else.' An Irish reader, John Graham, came up with a string of West Coast legal jokes, apparently dating to the time when juries refused, on nationalistic grounds, to convict one of their own. Hence the great judicial remark to an obvious felon: 'You have been cleared of the charge by a Limerick jury and leave this court with no other stain on your character.'

The PoPe's visit to Poland was an amazing nel,vspaper story, done justice to by an excellent article in the Observer by Mark Frankland. This account of crowds of up to two million people ought to give cause for thought to those Roman Catholics, above all in Africa, who try to suck up to the Communists. I refer above to the Catholic COmmission for Justice and Peace (sic) in Zimbabwe, who remain implacable foes of a..0 internal settlement. British politicians like David Steel and Lord Chitnis, who go to Zimbabwe in order to rubbish it, are normally accompanied by a member of the Catholic Institute for International Relations, who politics correspond to those of the World Council of Churches. Their apparent aim is to impose on the luckless Z.imbabweans a rule by Russian puppets, s.Imilar to if not worse than that still suffered by the Poles. Only last week Russia sent 1,000 tons of arms and ammunition to ZIFRA forces in Zambia although, ironically, Zambia is relying on Zimbabwe for rood to avert mass starvation.

In one of three articles on Trollope's political England, I wrote that the villain of The Prime Minister had thrown himself under a train at what must be Watford. A learned reader points out that the junction was almost certainly Willesden, which then was a halt on the line to many northern cities including Liverpool. However I cannot accept that Barchester was meant to be other than Salisbury. The Archdeacon of Winchester argued for that city (Letters, 28 April) partly on the grounds that Trollope had been to Winchester College. And so he had, but loathed every day of it. In his Autobiography, published after his death, Trollope writes of his work for the Post Office in south-west England and says: 'In the course of the job I visited Salisbury, and whilst wandering there . . . I conceived the story of The Warden — from whence came that series of novels of which Barchester, with its Bishops, Deans, and Archdeacons was the central site.'

Trollope would have enjoyed the intrigue over the choice of the new Archbishop of Canterbury. Is there any chance of selecting a man who will first withdraw from the World Council of Churches (see articles in the last two Spectators) and then restore our great Bible and Liturgy? As a correspondent recently pointed out, the Lord's Prayer is now said in more than 100 versions — not counting the version I recently heard from a four-year-old: 'Our Father which art in Heaven, has smacked our Mummy on the bum.' (It is heartening in a way that the old Lord's Prayer lives on, if only in childish parody). Various people suggest David Sheppard as new Archbishop, on the principle that his fame as a former Test cricketer would win him support from the young. I fear he is too much in the Coggan mould, if not actually a supporter of the World Council of Churches. If we must have a cricketing Archbishop of Canterbury, why do we not choose somebody more robust, such as Several recent letters in the Spectator have remarked how novelists like Dickens and George Eliot are read and enjoyed in spite of_the disapproval of academics and trendy literate urs. The same is equally true of poets like Kipling, Tennyson and Yeats, whose 'horrible poems', as I have heard them described, are right out of fashion in trendy left-wing Dublin. Now, at last, some of the posh reviewers have come to admit what the reading public has known for a hundred years, that Edward Fitzgerald's Rubaiyat is a delightful poem. According to two new translators, Peter Avery and John HeathStubbs, he was also poetically faithful to Omar Khayyam's original, 'divining the essentially sceptical and unorthodox nature of the Persian poet's thought.' I doubt if Khayyam would have enjoyed the greedy opulence of the modern Shah's Persia; still less the blood-stained bigotry of the Ayahorror Khomeini. A loaf of bread he might be allowed, perhaps even a book of (religious) verses, but no flask of wine and certainly, no Thou. They shoot Omar Khayyams in vile new Persia.

I was sad to read of the death in Zimbabwe of Major Andre Dennison, who had only recently won that country's top award for courage. He was not a man likely to be a Guardian hero, having served in the British Special Air Service, including a spell in Ulster, before going off in middle age to fight for Zimbabwe. He had much more respect for the ZANLA guerrillas than he ever had for the IRA, whom he regarded as cowards as well as assassins. Unlike many local white officers, Andre conceded that many of ZANLA were good soldiers and brave. Unlike many other white officers of the RAR, he was trusted and liked by his own African troops; indeed such was his reputation that black soldiers from different and distant units would seek Andre's help as defence in a court martial. He was a witty and most agreeable drinking companion . I notice that he received his last, fatal bullet resisting a ZANLA attack on the bar of Zimbabwe Ruins Hotel. He would have liked to have gone that way.

Our TV critic and Private Eye editor Richard Ingrams should study page 148 of Jill Tweedie's new book In the Name of Love (Cape £4.95). 'For almost a year'. she writes, I had been subjected to personal attack in a magazine . . . scandal, innuendoes, lies'. She did not know the editor, but had seen his photograph in the papers. 'One night after months of this persecution. I dreamed that he fell in love with me, that we slept together. . . I allowed him a fascinating variety of sexual favours. . . After that, oddly enough. I was free of my previous paranoia and, even more curiously, the magazine stopped attacking me.' Can this be a unique case of the Curse of Gnome in reverse?