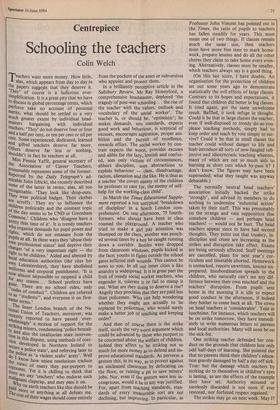 Teachers want more money. How little, alas, which appears from day to day in the papers suggests that they deserve it. They' of course is a ludicrous over- simplification. It is a great pity that we have to discuss in global percentage terms, which perforce take no account of personal merits, what should be settled to a very much greater extent by individual head- masters bargaining with individual teachers. 'They' do not deserve four or four and a half per cent, or ten per cent or nil per cent. Some experienced, dedicated, learned and gifted teachers deserve far more. Others deserve far less or nothing, shouldn't in fact be teachers at all.

the Association of Career Teachers, Presumably represents some of the former. Reported by the Daily Telegraph's ad- mirable John Izbicki, she recently described some of the latter in terms, alas, all too ,,,,reeognisable. 'They look like drop-outs. "ley wear political badges. Their clothes are scruffy. They try to influence the children politically and the constant topic of the day seems to be CND or Greenham Common.' Children who 'disagree have a Pretty thin time of it'. It is trendy teachers W110 organise demands for pupil power and rights, which do not emanate from the PuPils at all. In these ways they 'abuse their Own professional status' and deprive their charges 'of a very important right — the right to be children.' Aided and abetted by local education authorities (she cites her °I'Vri Leicestershire), they have abolished uniforms and corporal punishment. 'It is 00W almost impossible to suspend a child for anY reason ... School prefects have ,t2Irle. There are no school rules, only Codes of conduct". Children are referred to as "students", and everyone is on first- name terms.' t. The Inner London branch of the Na- Union of Union of Teachers, moreover, was h,efentlY reported to have passed 'over- whelmingly' tnineras,motion of support for the condemning 'police brutali- ty and also the totalitarian state interven- _`°n M this dispute, using methods of coer- 'slYn developed in Northern Ireland to ,,ccure a police state', and referring later to Te Police as 'a violent scabs' army'. Well tub° I know how union resolutions traduce views of many they pur-purport to .ruPresent. Yet it is chilling to think that represent, are any 'teachers' who endorse such 7itani claptrap, and may pass it on. Paid more on earth teachers like this should be More or anything at all defeats me. "le cost of their wages should come entirely

from the pockets of the asses or subversives who appoint and protect them.

In a brilliantly perceptive article in the Salisbury Review, Mr Ray Honeyford, a comprehensive headmaster, deplored 'the tragedy of post-war schooling... the rise of the teacher with the values, outlook and vocabulary of the social worker'. The teacher is, or should be, 'optimistic'; he makes demands, sets standards, expects good work and behaviour, is sceptical of excuses, encourages aspiration, proper am- bition and the pursuit of excellence, rewards effort. The social worker by con- trast expects the worst, provides excuses and alibis for the lazy, loutish and confus- ed, sees only victims of circumstances, abhors discipline, uses abstractions to explain behaviour — class, disadvantage, racism, alienation and the like. He is thus as a teacher 'the covert enemy of the children he professes to care for, the enemy of self- help for the working-class child'.

In March the Times Educational Supple- ment reported a not untypical 'breakdown of discipline' in a South London com- prehensive. On one afternoon, 75 fourth- formers who should have been in class roamed the playground. A teacher who tried to make a girl pay attention was thumped on the chest, another was punch- ed several times by a boy he caught running down a corridor. Bottles were dropped from classroom windows, pupils kicked in the face; youths in fights outside the school gates inflicted stab wounds. This cannot be news to you. In all our inner cities a like anarchy is widespread. It is in great part the fruit of trendy social worker teachers, who engender it, tolerate it or fail to stamp it out. What are they doing to deserve a rise? Angrily they proclaim that they are paid less than policemen. Who can help wondering whether they ought not actually to be replaced by policemen, who would surely make a better job of teaching and keeping order?

And then of course there is the strike itself, surely the very worst argument which could be advanced by those who purport to be concerned about the welfare of children. Indeed they affect to be striking not so much for more money as to defend and im- prove educational standards. As perverse a gesture this, in its way, as to protest against an uncleaned classroom by defecating on the floor, or ruining a pit to save miners' jobs. Nor, even if the gesture were less in- congruous, would it be in any way justified. For, apart from teaching standards, stan- dards of every measurable sort are not declining, but improving. In particular, as Professor John Vincent has pointed out in the Times, the ratio of pupils to teachers has fallen steadily for years. This must mean one of two things. If classes remain much the same size, then teachers must have more free time to mark home- work, prepare lessons and do all the other chores they claim to take home every even- ing. Alternatively, classes must be smaller, which teachers always say is a good thing.

(On this last score, I have doubts. An organisation for the protection of children set out some years ago to demonstrate statistically the evil effects of large classes. Contrary to its hopes and expectations, it found that children did better in big classes. It tried again, got the same unwelcome result. Baffled, it took refuge in thought. Could it be that in large classes the teacher, even if well-disposed to trendy do-as-you- please teaching methods, simply had to keep order and teach by rote simply to sur- vive? Could it be that in small classes the teacher could without danger to life and limb introduce all sorts of new- fangled sub- jective and idiosyncratic teaching wheezes, many of which are not so much aids to learning as short cuts which by-pass it? I don't know. The figures may have been superseded; what they taught was anyway debatable.) The normally neutral head teachers' association initially backed the strike `strongly', and advised its members to do nothing to undermine 'industrial action' taken by their staff. This was presumably on the strange and vain supposition that somehow children — and perhaps head teachers! — would not be hurt. The head teachers appear since to have had second thoughts. They point out that truancy, in- discipline and crime are increasing as the strikes and disruption take effect. Exams are being seriously affected. Staff meetings are cancelled, plans for next year's cur- riculum and timetable aborted. Homework is unmarked, reports unwritten, lessons un- prepared. Insubordination spreads to the children, who naturally can't see any dif- ference between their own mischief and the teachers' disruption. From pupils sent home in the morning it is idle to expect good conduct in the afternoon, if indeed they bother to come back at all. The stress on head teachers is 'considerable'. Told at lunchtime, for instance, which teachers will be on strike tomorrow, they have immedi- ately to write numerous letters to parents and local authorities. Many will soon be on the sick-list.

One striking teacher defended her con- duct on the grounds that children lose only odd half-days of learning. She pointed out that no parents think their children's educa- tion gravely damaged by half a day off sick.

True: but the damage which teachers by striking do to themselves in children's eyes is lasting, as are the effects of the example they have set. Authority misused or carelessly discarded is not soon if ever restored, nor forfeited respect regained. The strikes may go on next week. May I?