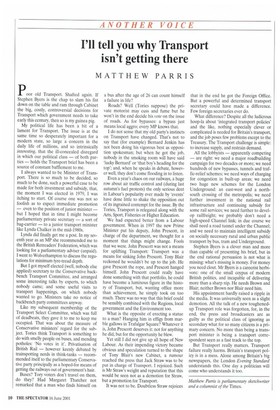 I'll tell you why Transport isn't getting there

Poor old Transport. Shafted again. If Stephen Byers is the chap to slam his fist down on the table and ram through Cabinet the big, costly, controversial decisions for Transport which government needs to take early this century, then so is my guinea pig.

My political life has been a bit of a lament for Transport. The issue is at the same time so desperately important for a modern state, so large a concern in the daily life of millions, and so intrinsically interesting, that the ill-concealed disregard in which our political class — of both parties — holds the Transport brief has been a source of constant bafflement to me.

I always wanted to be Minister of Transport. There is so much to be decided, so much to be done, such a powerful case to be made for both investment and subsidy, that, the moment I was elected in 1979, I was itching to start. Of course one was not so foolish as to expect immediate promotion — even to the position of junior minister — but I hoped that in time I might become parliamentary private secretary — a sort of bag-carrier — to a junior transport minister like Lynda Chalker in the mid-1980s.

Lynda did finally get me a post. In my seventh year as an MP she recommended me to the British Retreaders' Federation, which was looking for a parliamentary adviser (unpaid). I went to Wolverhampton to discuss the regulations for minimum tyre-tread depth.

But I got myself elected (well, nobody else applied) secretary to the Conservative backbench Transport Committee, and arranged some interesting talks by experts, to which nobody came; and some useful visits to transport happenings, on which nobody wanted to go. Ministers take no notice of backbench party committees anyway.

Like my subsequent membership of the Transport Select Committee, which was full of deadbeats, they gave it to me to keep me occupied. That was about the measure of Conservative ministers' regard for the subject. Tories think Transport is something to do with smelly people on buses, and mending potholes: 'No votes in it'. Privatisation of British Rail — however keenly debated by trainspotting nerds in think-tanks — recommended itself to the parliamentary Conservative party principally as a hoped-for means of getting the railways out of government's hair.

Buses? Tory voters don't travel on them, do they? Had Margaret Thatcher not remarked that a man who finds himself on a bus after the age of 26 can count himself a failure in life?

Roads? Well (Tories suppose) the private motorist may cuss and fume but he won't in the end decide his vote on the issue of roads. As for bypasses: a bypass just means local aggro; every MP knows that.

I do not sense that my old party's instincts on Transport have changed. That's not to say that (for example) Bernard Jenkin has not been doing his vigorous best as opposition spokesman; but when he got the job, nobody in the smoking room will have said 'lucky Bernard' or 'that boy's heading for the top'; and, when he speaks in debate, however well, they don't come flooding in to listen.

Even a year's chaos on our railways, a huge row about air traffic control and (during last autumn's fuel protests) the only serious dent in Labour's popularity ever made by 'events' have done little to shake the opposition out of its ingrained contempt for the issue. By the Tories, Transport is relegated along with the Arts, Sport, Fisheries or Higher Education.

We had expected better from a Labour government. When in 1997 the new Prime Minister put his deputy, John Prescott, in charge of the department, we thought for a moment that things might change. Fools that we were. John Prescott was not a means for uplifting Transport: Transport was a means for sinking John Prescott. Tony Blair reckoned he wouldn't be up to the job. He gave Prescott the rope, and Prescott hanged himself. John Prescott could really have done something with that portfolio, he could have become a luminous figure in the history of Transport, but, wanting office more than achievement, he simply took on too much. There was no way that this brief could be sensibly combined with the Regions, local government and the Environment too.

What is the opposite of erecting a statue to a man? Hanging him in effigy from marble gallows in Trafalgar Square? Whatever it is, John Prescott deserves it: not for anything he did, but for the opportunity he blew.

Yet still I did not give up all hope of New Labour. As their impending victory became obvious and speculation turned to the shape of Tony Blair's new Cabinet, a rumour reached the press that Jack Straw was to be put in charge of Transport. I rejoiced. Such is Mr Straw's weight and reputation that this would be seen not as a demotion for Straw, but a promotion for Transport.

It was not to be. Doubtless Straw rejoices that in the end he got the Foreign Office. But a powerful and determined transport secretary could have made a difference. Few foreign secretaries ever do.

What difference? Despite all the ludicrous hoop-la about 'integrated transport policies' and the like, nothing especially clever or complicated is needed for Britain's transport, and the job poses few problems except to the Treasury. The Transport challenge is simple: to increase supply, and restrain demand.

All the lobbyists — apparently competing — are right: we need a major roadbuilding campaign for two decades or more; we need hundreds of new bypasses, tunnels and traffic-relief schemes; we need ways of charging for congestion in built-up areas; we need two huge new schemes for the London Underground: an east-west and a northsouth crossing of the metropolis; we need further investment in the national rail infrastructure and continuing subsidy for some rail services; we need further to develop railfreight; we probably don't need a high-speed Channel link; in due course we shall need a road tunnel under the Channel; and we need to maintain intelligent subsidy on socially necessary rural and urban public transport by bus, tram and Underground.

Stephen Byers is a clever man and more than capable of presenting his brief, but in the end rational persuasion is not what is missing: what's missing is money. For money you need clout. Mr Byers is a careerist herbivore: one of the small coypus of modern British politics, and incapable of delivering more than a sharp nip. He needs Brown and Blair; neither Brown nor Blair need him.

His appointment hardly raised a ripple in the media. It was universally seen as a slight demotion. All the talk of a new toughenedup Transport role was forgotten, for, in the end, the press and broadcasters are as guilty as the political class of ignoring as secondary what for so many citizens is a primary concern. No more than being a transport minister is being a transport correspondent seen as a fast track to the top.

But Transport really matters. Transport failure really harms. Britain's transport policy is in a mess. Alone among Britain's big newspapers, the London Evening Standard understands this. One day a politician will come who understands it too.