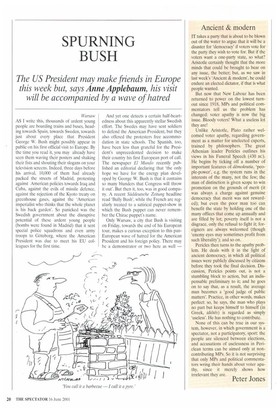 IT takes a party that is about to be blown out of the water to argue that it will be a disaster for 'democracy' if voters vote for the party they wish to vote for. But if the voters want a one-party state, so what? Aristotle certainly thought that the more minds that could be brought to bear on any issue, the better; but, as we saw in last week's 'Ancient & modern', he could endure an elected dictator, if that is what people wanted.

But now that New Labour has been returned to power on the lowest turnout since 1918, MPs and political commentators tell us the problem has changed: voter apathy is now the big issue. Bloody voters! What a useless lot they are!

Unlike Aristotle, Plato rather welcomed voter apathy, regarding government as a matter for unelected experts, trained by philosophers. The great Athenian leader Pericles outlines his views in his Funeral Speech (430 BO. He begins by ticking off a number of important features of dernokratia, 'people-power', e.g. the system runs in the interests of the many, not the few; the man of distinction is given scope to win promotion on the grounds of merit (it was always a charge against genuine democracy that merit was not rewarded); but even the poor man too can benefit the state by holding one of the many offices that come up annually and are filled by lot; poverty itself is not a disgrace, only the refusal to fight it; foreigners are always welcomed (though 'enemy eyes may sometimes profit from such liberality'); and so on.

Pericles then turns to the apathy problem. He deals with it in the light of ancient democracy, in which all political issues were publicly discussed by citizens before they took the final decision. Discussion, Pericles points out, is not a stumbling block to action, but an indispensable preliminary to it; and he goes on to say that, as a result, the average man becomes a 'good judge of public matters'. Practice, in other words, makes perfect: so, he says, the man who plays no part but keeps himself to himself (in Greek, idie0s) is regarded as simply 'useless'. He has nothing to contribute.

None of this can be true in our system, however, in which government is a spectator, not a participatory, sport: the people are silenced between elections, and accusations of uselessness in Periclean terms can be aimed only at noncontributing MPs. So it is not surprising that only MPs and political commentators wring their hands about voter apathy, since it merely shows how

irrelevant they are. Peter Jones