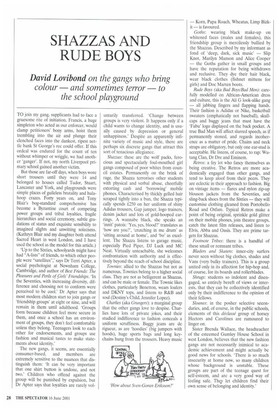 David Lovibond on the gangs who bring

colour — and sometimes terror — to the school playground

TO join my gang, supplicants had to face a gruesome rite of initiation. Francis, a huge simpleton who acted as our enforcer, would clamp petitioners' bony arms, hoist them trembling into the air and plunge their clenched faces into the dankest, ripest nettle bank St George's rec could offer. If this ordeal was endured for the count of ten without whimper or wriggle, we had another `ganger'. If not, my north Liverpool primary school gained another victim.

But those are far-off days, when boys wore short trousers until they were 14 and belonged to houses called Tudor, Stuart, Lancaster and York, and playgrounds were simple places of guileless brutality and hulahoop crazes. Forty years on, and Tony Blair's bog-standard comprehensive has become a Byzantine court of competing power groups and tribal loyalties, fragile hierarchies and social ceremony, subtle gradations of status and exquisite sensibility to imagined slights and unwitting solecisms. (Kathryn Blair and my daughter both attend Sacred Heart in west London, and I have used the school as the model for this article.)

'Up to the Sixties, schoolyards might have had "A-lists" of friends, to which other people were "satellites",' says Dr Terri Apter, a social psychologist at Newnham College, Cambridge, and author of Best Friends.. The Pleasures and Perils of girls' Friendships. 'In the Seventies, with increasing diversity, difference and choosing not to conform were perceived to be cool.' Dr Apter says that most modern children start to join gangs or 'friendship groups' at eight or nine, and will remain in them until adulthood. 'Groups form because children feel more secure in them, and once a school has an environment of groups, they don't feel comfortable unless they belong. Teenagers look to each other for endorsements, and groups use fashion and musical tastes to make statements about identity.'

The new gangs, it seems, are essentially consumer-based, and members are extremely sensitive to the nuances that distinguish them: 'It can be very important that one shirt button is undone, and not two.' Children who offend against the group will be punished by expulsion, but Dr Apter says that loyalties are rarely vol

untarily transferred. 'Change between groups is very violent. It happens only if a child wants to change identity, and is usually caused by depression or general unhappiness.' Despite an apparently infinite variety of music and style, there are perhaps six discrete gangs that attract this sort of tenacious allegiance.

Shazzas: these are the wolf packs, ferocious and spectacularly foul-mouthed girl gangs composed of poor whites from council estates. Permanently on the brink of rage, the Shazza terrorises other students with physical and verbal abuse, cheerfully extorting cash and 'borrowing' mobile phones. Characterised by thickly gelled hair scraped tightly into a bun, the Shazza typically spends £250 on her uniform of shiny Adidas trousers, Gap jumper, logo trainers, denim jacket and lots of gold-hooped earrings. A wannabe black, she speaks an innit' patois: 'Yes, yes, blood?' translates as 'how are you?', 'crutching in me drum' as 'sitting around at home', and `bo' as excellent. The Shazza listens to garage music, especially Pied Piper, DJ Luck and MC Neat. Virtually unteachable, she welcomes confrontation with authority and is effectively beyond the reach of school discipline.

Townies: allied to the Shazzas but not as numerous, Townies belong to a higher social class. They are not as belligerent as Sha77as, and can be male or female. The Townie likes clothes, particularly Benetton, wears loafers and DICNY tops, and listens to R&B and soul (Destiny's Child, Jennifer Lopez).

Charlies (aka Grungers): a marginal group that the other gangs love to despise. Charlies have lots of private jokes, and their studied indifference to fashion conceals a uniform scruffiness. Baggy jeans are de rigueur, as are 'hoodies' (big jumpers with hoods), huge sports bags and long keychains hung from the trousers. Heavy music — Korn, Papa Roach, Wheatus, Limp Bizkit — is favoured.

— the Goths gather in small groups and have the reputation for being withdrawn and reclusive. They dye their hair black, wear black clothes (fishnet mittens for girls) and Doc Marten boots.

Rude Boys (aka Bad Boys/Bad Men): carefully modelled on African-American dress and culture, this is the Ali G look-alike gang

— all jabbing fingers and flapping hands. Their fashion is Adidas or Nike, basketball sweaters (emphatically not baseball), skullcaps and baggy jeans that must have the Tubu' logo displayed on the back pocket. A true Bad Man will affect slurred speech, as if permanently stoned, and regards incoherence as a matter of pride. Chains and neck straps are obligatory, but only one ear-stud is acceptable. He listens, of course, to rap: Wutang Clan, Dr Dre and Eminem.

Retros: a fey lot who fancy themselves as being creative. The Retros are more academically engaged than other gangs, and tend to keep aloof from their peers. They are eclectic in their approach to fashion. Big on vintage items — flares and nylon zip-up blouson jackets from the Seventies, and sling-back shoes from the Sixties — they will customise clothing gleaned from Portobello Road and Oxfam. Typical Retros make a point of being original, sprinkle gold glitter on their mobile phones, join theatre groups, catch the latest film releases, and listen to Elvis, Abba and Oasis. They are prime targets for Sha77as Footnote Tribes: there is a handful of these small or remnant tribes.

Bladers and Skaters: inner-city surfers never seen without big clothes, shades and Vans (very bulky trainers). This is a group united only in its affection for hip-hop and, of course, for its boards and rollerblades.

Shrugs: students so indolent and disengaged, so entirely bereft of views or interests, that they can be collectively identified only by their indifference to the opinion of their fellows.

Sloanes: in the posher selective secondaries, and, of course, in the public schools, elements of this déclassé group of horsey Hectors and Carolines are rumoured to linger on.

Sister Brenda Wallace, the headteacher of the esteemed Gumley House School in west London, believes that the new fashion gangs are not necessarily inimical to academic achievement and might actually be good news for schools. 'There is so much insecurity at home now, so many children whose background is unstable. These groups are part of the teenage quest for self-esteem, and are a very good way of feeling safe. They let children find their own sense of belonging and identity.'