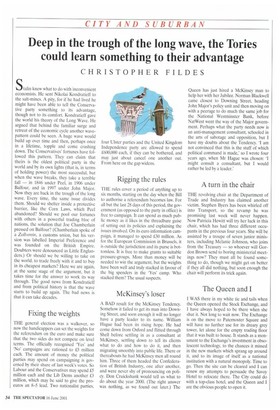 Page 34, 16 June 2001 — Deep in the trough of the long wave, the Tories could learn something to their advantage
Close

Deep in the trough of the long wave, the Tories could learn something to their advantage

Stalin knew what to do with inconvenient economists. He sent Nikolai Kondratieff to the salt-mines. A pity, for if he had lived he might have been able to tell the Conservative party something to its advantage, though not to its comfort. Kondratieff gave the world his theory of the Long Wave. He argued that behind the familiar surge and retreat of the economic cycle another wavepattern could be seen. A huge wave would build up over time and then, perhaps once in a lifetime, topple and come crashing down. The Conservatives' fortunes have followed this pattern. They can claim that theirs is the oldest political party in the world and by its own lights (that is, in terms of holding power) the most successful, but when the wave breaks, they take a terrible fall in 1846 under Peel, in 1906 under Balfour, and in 1997 under John Major. Now they are back in the trough of the long wave. Every time, the same issue divides them. Should we shelter inside a protective barrier, like the Corn Laws, which Peel abandoned? Should we pool our fortunes with others in a powerful trading bloc of nations, the solution that Joe Chamberlain pressed on Balfour? (Chamberlain spoke of a Zollverein, a customs union, but his version was labelled Imperial Preference and was founded on the British Empire. Doubters were denounced as Little Englanders.) Or should we be willing to take on the world, to trade freely with it and to buy in its cheapest markets? Here we are again, at the same stage of the argument, but it takes time for the answer to work its way through. The good news from Kondratieff and from political history is that the wave starts to build up again. The bad news is that it can take decades.

THE general election was a walkover, so now the handicappers can set the weights for the referendum on the euro and make sure that the two sides do not compete on level terms. The officially recognised 'Yes' and 'No' campaigns are rationed to £5 million each. The amount of money the political parties may spend on campaigning is governed by their share of last week's votes. So Labour and the Conservatives may spend £5 million each and the Lib Dems another £3 million, which may be said to give the proeuros an 8-5 lead. Two nationalist parties, four Ulster parties and the United Kingdom Independence party are allowed to spend £600,000 each, if they can be bothered, and may just about cancel one another out. From here on the gap widens.

THE rules cover a period of anything up to six months, starting on the day when the Bill to authorise a referendum becomes law. For all but the last 28 days of this period, the government (as opposed to the party in office) is free to campaign. It can spend as much public money as it likes in the threadbare guise of setting out its policies and explaining the issues involved. On its euro information campaign, it managed to spend £30 million. As for the European Commission in Brussels, it is outside the jurisdiction and its purse is bottomless. It is free to make grants to suitable pressure-groups. More than money will be needed to win the argument, but the weights have been well and truly stacked in favour of the big spenders in the 'Yes' camp. Who stacked them? The usual suspects.

A BAD result for the McKinsey Tendency. Somehow it failed to get its man into Downing Street, and soon enough it will no longer have a party leader to its name. William Hague had been its rising hope. He had come down from Oxford and flitted through Shell before settling in as a consultant at McKinsey, settling down to tell its clients what to do and how to do it, and then migrating smoothly into public life. There or thereabouts he had McKinsey men all round him. Three of them headed the Confederation of British Industry, one after another, and were never shy of pronouncing on policy. Don Cruickshank would tell us what to do about the year 2000. (The right answer was nothing, as we found out later.) The

Queen has just hired a McKinsey man to help her with her Jubilee. Norman Blackwell came closest to Downing Street, heading John Major's policy unit and then moving on with a peerage to do much the same job for the National Westminster Bank, before NatWest went the way of the Major government. Perhaps what the party needs now is an anti-management consultant, schooled in the arts of sabotage and opposition, but I have my doubts about the Tendency. 'I am not convinced that this is the stuff of which political command is made,' so I wrote four years ago, when Mr Hague was chosen: 'I might consult a consultant, but I would rather be led by a leader.'

A turn in the chair

THE revolving chair at the Department of Trade and Industry has claimed another victim. Stephen Byers has been whirled off into Transport, so the revamp he was promising last week will never happen. Now Patricia Hewitt will try her luck in this chair, which has had three different occupants in the previous four years. She will be assisted by a troupe of seven junior ministers, including Melanie Johnson, who joins from the Treasury — so whoever will Gordon Brown send to boring ministerial meetings now? They must all be found something to do, though we might get on better if they all did nothing, but soon enough the chair will perform its trick again.

The Queen and I

I WAS there in my white tie and tails when the Queen opened the Stock Exchange, and I have always hoped to be there when she shut it. Not long to wait now. The Exchange is on the move to Paternoster Square and will have no further use for its dreary grey tower, let alone for the empty trading floor that it was built to house. It stands as a monument to the Exchange's investment in obsolescent technology, to the chances it missed in the new markets which sprang up around it, and to its image of itself as a national institution with a natural monopoly. Time to go. Then the site can be cleared and I can renew my attempts to persuade the Savoy Hotel to relocate there. The City could do with a top-class hotel, and the Queen and I are the obvious people to open it,