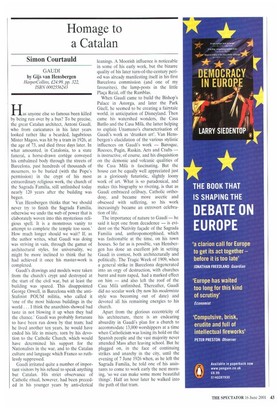 Homage to a Catalan

GAUDI by Gijs van Hensbergen HatperCollins, £24.99, pp. 322, ISBN 0002556243 Has anyone else so famous been killed by being run over by a bus? To be precise, the great Catalan architect, Antoni Gaudi, who from caricatures in his later years looked rather like a bearded, lugubrious Mister Magoo, was hit by a tram in 1926, at the age of 73, and died three days later. In what amounted, in Catalonia, to a state funeral, a horse-drawn cortege conveyed his embalmed body through the streets of Barcelona, past hundreds of thousands of mourners, to be buried (with the Pope's permission) in the crypt of his most extraordinary religious work, the church of the Sagrada Familia, still unfinished today nearly 120 years after the building was begun.

Van Hensbergen thinks that 'we should never try to finish the Sagrada Familia, otherwise we undo the web of power that is elaborately woven into this mysterious religious spell. It is a monstrous vanity to attempt to complete the temple too soon.' How much longer should we wait? If, as the author writes, what Gaudi was doing was striving in vain, through the gamut of architectural styles, for universality, we might be more inclined to think that he had achieved it once his master-work is completed.

Gaudi's drawings and models were taken from the church's crypt and destroyed at the start of the civil war, but at least the building was spared. This disappointed George Orwell, in Barcelona with the antiStalinist POUM militia, who called it 'one of the most hideous buildings in the world .. . I think the anarchists showed bad taste in not blowing it up when they had the chance.' Gaudi was probably fortunate to have been run down by that tram; had he lived another ten years, he would have ended his life in misery, torn by his devotion to the Catholic Church, which would have determined his support for the Nationalists in the war, and to the Catalan culture and language which Franco so ruthlessly suppressed.

Gaudi irritated quite a number of important visitors by his refusal to speak anything but Catalan. His strict observance of Catholic ritual, however, had been preceded in his younger years by anti-clerical leanings. A Moorish influence is noticeable in some of his early work, but the bizarre quality of his later turn-of-the-century period was already manifesting itself in his first Barcelona commission (and one of my favourites), the lamp-posts in the little Placa Reial, off the Ramblas.

When Gaudi came to build the Bishop's Palace in Astorga, and later the Park Giiell, he seemed to be creating a fairytale world, in anticipation of Disneyland. Then came his watershed wonders, the Casa Batllo and the Casa Milk the latter helping to explain Unamuno's characterisation of Gaudi's work as 'drunken art'. Van Hens bergen's elucidation of the various stylistic influences on Gaudi's work — Baroque.

Rococo, Pugin, Ruskin, Arts and Crafts — is instructive, of course, and his disquisition on the demonic and volcanic qualities of the Casa Mila is fascinating. But the house can be equally well appreciated just as a gloriously futuristic, slightly loony work of art. What is so paradoxical, and makes this biography so riveting, is that as Gaudi embraced celibacy, Catholic ortho doxy, and became more ascetic and obsessed with suffering, so his work increasingly became an extrovert celebration of life.

The importance of nature to Gaudi — he said it kept one from decadence — is evi dent on the Nativity facade of the Sagrada Familia and, anthropomorphised, which was fashionable at the time, on his town houses. So far as is possible, van Hensber gen has done an excellent job in setting Gaudi in context, both architecturally and politically. The Tragic Week of 1909, when a general strike in Barcelona degenerated into an orgy of destruction, with churches burnt and nuns raped, had a marked effect on him — and also left the roof of the Casa Mira unfinished. Thereafter, Gaudi did no secular work (by now his modernista style was becoming out of date) and devoted all his remaining energies to his church.

Apart from the glorious eccentricity of his architecture, there is an endearing absurdity in Gaudi's plan for a church to accommodate 13,000 worshippers at a time when Catholicism was losing its hold on the

attended Mass after leaving school. But he plugged on, in the face of continuing strikes and anarchy in the city, until the evening of 7 June 1926 when, as he left the Sagrada Familia, he told one of his assis tants to come to work early the next morning, 'so we can make some more beautiful things'. Half an hour later he walked into the path of that tram.