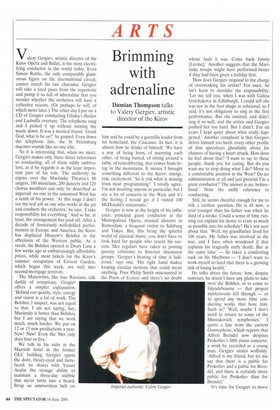 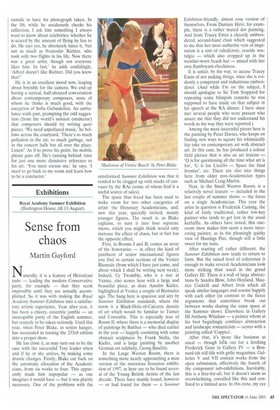 Valery Gergiev, artistic director of the Kirov Opera and Ballet, is the most electrifying conductor in the world today. Even Simon Rattle, the only comparably glamorous figure on the international circuit, cannot match his raw charisma. Gergiev will take a tired piece from the repertoire and pump it so full of adrenaline that you wonder whether the orchestra will have a collective seizure. (Or perhaps he will, of which more later.) The other day I put on a CD of Gergiev conducting Glinka's Ruslan and Ludmilla overture. The telephone rang and I picked it up without turning the music down. It was a musical friend. 'Good God, what is he on?' he gasped. Even down the telephone line, the St Petersburg maestro sounds like no one else.

So it is interesting that, when we meet, Gergiev makes only three direct references to conducting, all of them oddly ambivalent, as if he regards it as the least important part of his role. The authority he enjoys over the Mariinsky Theatre's 80 singers, 180 musicians, 200 dancers and 120 chorus members can only be described as imperial: no one in the unionised West has a tenth of his power. 'At this stage I don't see my real job as one who works in the pit and conducts the orchestra,' he says. 'I take responsibility for everything.' And so far, at least, the arrangement has paid off. After a decade of ferociously well-drilled performances in Europe and America, the Kirov has displaced Moscow's Bolshoi in the affections of the Western public. As a result, the Bolshoi opened at Drury Lane a few weeks ago at embarrassingly affordable prices, while most tickets for the Kirov's summer occupation of Covent Garden, which began this week, are well into second-mortgage territory.

The Muscovites, like true Russians, talk darkly of conspiracy. Gergiev offers a simpler explanation. 'Behind our quality, style, energy and vision is a lot of work. The Bolshoi, I suspect, was not equal to that. I am not saying, hey, Mariinsky is better than Bolshoi, but I am saying that we work much, much harder. We put on 12 or 13 new productions a year. New! New! Even the Met only does four or five.'

We talk in his suite at the Marriott hotel in the former GLC building. Gergiev opens the door, bleary-eyed and furryfaced: he shares with Yasser Arafat the strange ability to maintain a three-day stubble that never turns into a beard. Strap an ammunition belt on him and he could be a guerrilla leader from his homeland. the Caucasus. In fact, it is almost how he thinks of himself. 'We have a way of being born, of marrying each other, of being buried, of sitting around a table, of remembering, that comes from living in the mountains. It means I brought something different to the Kirov: energy, risk, excitement.' So is risk what is missing from most programming? 'I totally agree. I'm not insulting anyone in particular, but I see a lot of concerts in the West and it's the feeling I would get if I visited 100 McDonald's restaurants.'

Gergiev is now at the height of his influence: principal guest conductor at the Metropolitan Opera, musical director in Rotterdam, a frequent visitor to Salzburg and Tokyo. But, this being the spiteful world of classical music, you don't have to look hard for people who resent his success. Met regulars have taken to posting queeny criticisms to Internet discussion groups. `Gergiev's beating of time is ludicrous,' says one. 'His right hand makes looping circular motions that could mean anything. Poor Philip Smith miscounted in the Poem of Ecstasy and there's no doubt

whose fault it was. Come back Jimmy [Levine],' Another suggests that the Mariinsky troupe might have performed better if they had been given a holiday first.

How does Gergiev respond to the charge of overworking his artists? For once, he isn't keen to shoulder the responsibility. 'Let me tell you, when I was with Galina Gorchakova in Edinburgh, I could tell she was not in the best shape at rehearsal, so I said, it's not obligatory to sing in the first performance. But she insisted, and didn't sing it so well, and the critics said Gergiev pushed her too hard. But I didn't. For six years I kept quiet about what really happened.' Another complaint is that Gergiev drives himself too hard: every other profile of him speculates ghoulishly about his chances of having a heart attack. How does he feel about that? `I want to say to these people, thank you for caring. But do you want me to stop doing what I do? Move to a comfortable position in the West? Do no administration at all and just pretend I'm a great conductor? The answer is no, beforehand.' Note the sniffy reference to conducting.

Still, he seems cheerful enough for me to risk a tactless question. He is 48 now, a year younger than his father was when he died of a stroke. Could a sense of time running out explain his desire to cram as much as possible into his schedule? He's not sure about that. 'Well, my grandfather lived for 106 years. My father was involved in the war, and I have often wondered if that explains his tragically early death. But at the same time' — he takes a comforting suck on his Marlboro — 'I don't want to work myself so hard that there is a growing risk of losing health.'

He talks about the future: how, despite rumours, he doesn't have any plans to take over the Bolshoi, or to come to Glyndeboume — that project mysteriously fell through — or to spend any more time conducting works that bore him. Such as? 'Well, maybe I don't need to return to some of the Shostakovich symphonies.' I quote a line from the current Gramophone, which reports that Alfred Brendel now despises Prokofiev's fifth piano concerto, a work he recorded as a young man. Gergiev smiles wolfishly. 'Alfred is my friend, but let me say that there is a public for Prokofiev and a public for Brendel, and there is certainly more public for Prokofiev than for Brendel.'

It's time for Gergiev to move outside to have his photograph taken. In the lift, while he assiduously checks his reflection, I ask him something I always want to know about celebrities: whether he is scared by the amount of flying he has to do, He says yes, he absolutely hates it, but not as much as Sviatoslav Richter, who took only two flights in his life. Now there was a great artist, though not everyone likes him. In fact,' he adds confidingly, 'Alfred doesn't like Richter. Did you know that?'

He is in an excellent mood now, leaping about boyishly for the camera. We end up having a surreal, half-shouted conversation about contemporary composers, none of whom he thinks is much good, with the exception of Sofia Gubaidulina. An ambulance wails past, prompting the odd suggestion (from the world's noisiest conductor) that composers should try writing quiet pieces. 'We need unpolluted music,' he bellows across the courtyard. 'There's so much pollution in the air, so much garbage, not in the concert halls but all over the place. Listen!' As if to prove his point, his mobile phone goes off. He's running behind: time for just one more dismissive reference to his art. 'You must excuse me,' he says. 'I need to go back to my room and learn how to be a conductor.'