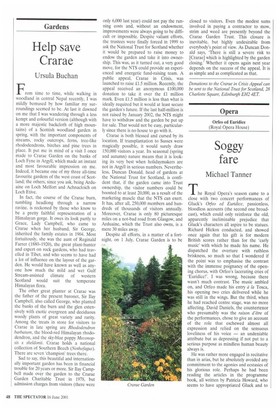 From time to time, while walking in woodland in central Nepal recently, I was mildly bemused by how familiar my surroundings seemed to be. At last it dawned on me that I was wandering through a less kempt and colourful version (although with a more majestic backcloth of high mountains) of a Scottish woodland garden in spring, with the important components of streams, rocky outcrops, ferns, tree-like rhododendrons, birches and pine trees in place. It put me in mind of a visit I once made to Crarae Garden on the banks of Loch Fyne in Argyll, which made an instant and most favourable impression on me. Indeed, it became one of my three all-time favourite gardens of the west coast of Scotland; the others, since you ask, being Arduaine on Loch Melfort and Achnacloich on Loch Etive.

In fact, the course of the Crarae burn, tumbling headlong through a narrow ravine, is reckoned by those who know to be a pretty faithful representation of a Himalayan gorge. It owes its look partly to Grace, Lady Campbell, who came to Crarae when her husband, Sir George, inherited the family estates in 1904. Most fortuitously, she was the aunt of Reginald Farrer (1880-1920), the great plant-hunter and expert on rock gardens, who had travelled in Tibet, and who seems to have had a lot of influence on the layout of the garden. He would have known as well as anyone how much the mild and wet Gulf Stream-assisted climate of western Scotland would suit the temperate Himalayan flora.

The other great planter at Crarae was the father of the present baronet, Sir hay Campbell, also called George, who planted the banks of the burn and the glen extensively with exotic evergreen and deciduous woody plants of great variety and rarity. Among the treats in store for visitors to Crarae in late spring are Rhododendron barbatum, the blood-red Himalayan rhododendron, and the sky-blue poppy Meconopsis x sheldonii. Crarae holds a national collection of Southern Beech (Nothofagus). There are seven 'champion' trees there.

Sad to say, this beautiful and internationally important garden has been in financial trouble for 20 years or more. Sir Ilay Campbell made over the garden to the Crarae Garden Charitable Trust in 1978, but admission charges from visitors (there were only 6,000 last year) could not pay the running costs and, without an endowment, improvements were always going to be difficult or impossible. Despite valiant efforts, the trustees were finally forced in 1999 to ask the National Trust for Scotland whether it would be prepared to raise money to endow the garden and take it into ownership. This was, as it turned out, a very good move, for the NTS could provide an experienced and energetic fund-raising team. A public appeal, Crarae in Crisis, was launched to raise £1.5 million. Recently, the appeal received an anonymous £100,000 donation to take it over the £1 million mark. Even £1.5 minion is less than what is ideally required but it would at least secure the garden's future. lithe last half-million is not raised by January 2002, the NTS might have to withdraw and the garden be put up for sale. That would not be easy, particularly since there is no house to go with it.

Crarae is both blessed and cursed by its location. If transplantation to Sussex were magically possible, it would surely draw 150,000 visitors a year. Its seasonal (spring and autumn) nature means that it is looking its very best when holidaymakers are not in Argyll in serious numbers. Nevertheless, Duncan Donald, head of gardens at the National Trust for Scotland, is confident that, if the garden came into Trust ownership, the visitor numbers could be boosted to at least 20,000, as a result of the marketing muscle that the NTS can exert. It has, after all, 250,000 members and hundreds of thousands of visitors annually. Moreover, Crarae is only 80 picturesque miles on a not-bad road from Glasgow, and Arduaine, which the Trust also owns, is a mere 30 miles away.

Despite all efforts, in a matter of a fortnight, on 1 July, Crarae Garden is to be closed to visitors. Even the modest sums involved in paying a contractor to mow, strim and weed are presently beyond the Crarae Garden Trust. This closure is inevitable, but highly undesirable from everybody's point of view. As Duncan Donald says, 'There is still a severe risk to [Crarae] which is highlighted by the garden closing.' Whether it opens again next year depends on the success of the appeal. It is as simple and as complicated as that.

Donations to the Crarae in Crisis Appeal can be sent to the National Trust for Scotland, 28 Charlotte Square, Edinburgh EH2 4ET.