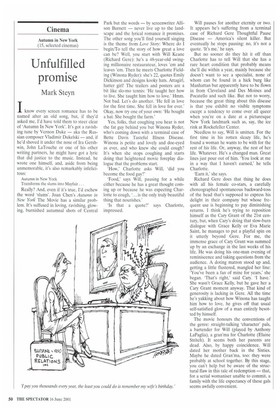 Iknow every screen romance has to be named after an "old song, but, if they'd asked me, I'd have told them to steer clear of 'Autumn In New York'. It's got a ravishing tune by Vernon Duke — aka the Russian composer Vladimir Duke!ski — and, if he'd shoved it under the nose of Ira Gershwin, John LaTouche or one of his other writing partners, he might have got a lyric that did justice to the music. Instead, he wrote one himself, and, aside from being unmemorable, it's also remarkably infelicitous:

Autumn in New York Transforms the slums into Mayfair ...

Really? And, even if it's true, I'd eschew the word. 'slums'. Joan Chen's Autumn in New York The Movie has a similar problem. It's suffused in loving, ravishing, glowing, burnished autumnal shots of Central

Park but the words — by screenwriter Allison Burnett — never live up to the landscape and the lyrical romance it promises. The other song you'll find yourself singing is the theme from Love Story: Where do I begin/To tell the story of how great a love can be? Well, you start with Will Keane (Richard Gere): he's a 48-year-old swinging millionaire restaurateur, loves 'em and leaves 'ern. Then he meets Charlotte Fielding (Winona Ryder): she's 22, quotes Emily Dickinson and designs kooky hats. Attagirl, hatter girl! The trailers and posters are a bit like slo-mo tennis: 'He taught her how to live. She taught him how to love.' Hmm. Not bad. Let's do another. 'He fell in love for the first time. She fell in love for ever.' Okay, now try one of your own: 'He bought a hat. She bought the farm.'

Yes, folks, that coughing you hear is not the fat guy behind you but Winona Ryder, who's coming down with a terminal case of Bette Davis Tasteful Illness Disease. Winona is petite and lovely and doe-eyed as ever, and who knew she could cough? It's when she stops coughing and starts doing that heightened movie foreplay dialogue that the problems start.

'How,' Charlotte asks Will, 'did you become the food guy?'

'Food,' says Will, pausing for a while either because he has a great thought coming up or because he was expecting Charlotte to cough, `... is the only truly beautiful thing that nourishes.'

'Is that a quote?' says Charlotte, impressed. Will pauses for another eternity or two. It appears he's suffering from a terminal case of Richard Gere Thoughtful Pause Disease — America's silent killer. But eventually he stops pausing: no, it's not a quote. 'It's me,' he says.

But no sooner do they hit it off than Charlotte has to tell Will that she has a rare heart condition that probably means she'll die within a year, mainly because she doesn't want to see a specialist, none of whom can be found in a hick burg like Manhattan but apparently have to be flown in from Cleveland and Des Moines and Pocatello and such like. But not to worry, because the great thing about this disease is that you exhibit no visible symptoms except a tendency to come over all queer when you're on a date at a picturesque New York landmark such as, say, the ice rink at Rockefeller Center.

Needless to say, Will is smitten. For the first time in his rotten sleazy life, he's found a woman he wants to be with for the rest of his life. Or, anyway, the rest of her life. Whatever. He's a changed man. Great lines just pour out of him. 'You look at me in a way that I haven't earned,' he tells Charlotte.

Richard Gere does that thing he does with all his female co-stars, a carefully choreographed spontaneous backward-toss of the head that's supposed to express his delight in their company but whose frequent use is beginning to pay diminishing returns. I think he's trying to reposition himself as the Cary Grant of the 21st century, but, when Cary's doing that slow-burn dialogue with Grace Kelly or Eva Marie Saint, he manages to put a playful spin on it utterly beyond Gere. For me, the immense grace of Cary Grant was summed up by an exchange in the last weeks of his life. He was doing his one-man evening of reminiscence and taking questions from the audience. A doting matron stood up and, getting a little flustered, mangled her line: 'You've been a fan of mine for years,' she began. 'That's right,' said Cary. 'I have.' She wasn't Grace Kelly, but he gave her a Cary Grant moment anyway. That kind of generosity is lacking in Gere. All the time he's yakking about how Winona has taught him how to love, he gives off that usual self-satisfied glow of a man entirely besotted by himself.

The movie honours the conventions of the genre: straight-talking 'character pals, a bartender for Will (played by Anthony LaPaglia), a gran'ma for Charlotte (Elaine Stritch). It seems both her parents are dead. Also, by happy coincidence, Will dated her mother back in the Sixties. Maybe he dated Gran'ma, too: they were probably at school together. By this stage, you can't help but be aware of the structural flaw in this tale of redemption — that, for a serial womaniser unable to commit, a family with the life expectancy of these gals seems awfully convenient.