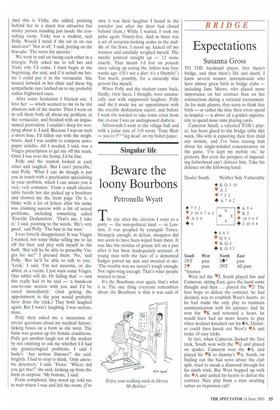 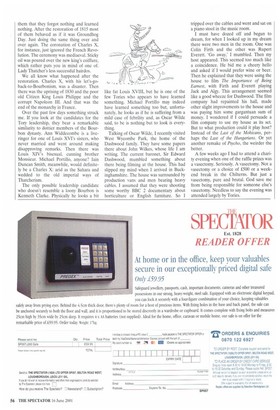 The day after the election I went to a party — the non-political kind — in London. It was peopled by youngish Tories. Strangely enough, in defeat, smugness did not seem to have been wiped from them. It was like the residue of grease left on a pan after it has been inadequately scoured. A young man with the face of a demented badger pawed my arm and sweated at me. 'The trouble was we weren't tough enough. Not right-wing enough. That's what people wanted to hear.'

It's the Bourbons over again, that's what it is. The one thing everyone remembers about the Bourbons is that it was said of them that they forgot nothing and learned nothing. After the restoration of 1815 most of them behaved as if it was Groundhog Day. Just doing the same thing over and over again. The coronation of Charles X, for instance, just ignored the French Revolution. The ceremony was mediaeval. Sticky oil was poured over the new king's coiffure, which rather puts you in mind of one of. Lady Thatcher's less successful hairdos.

We all know what happened after the restoration. Charles X, with his let's-goback-to-Bourbonism, was a disaster. Then there was the uprising of 1830 and the poor old Citizen King Louis Philippe and the corrupt Napoleon IIJ. And that was the end of the monarchy in France.

Over the past few days something struck me. If you look at the candidates for the Tory leadership, they bear a remarkable similarity to dottier members of the Bourbon dynasty. Ann Widdecombe is a liveringer for one of Louis XVI's sisters, who never married and went around making disapproving remarks. Then there was Louis XIV's bisexual, cunning brother Monsieur. Michael Partin°, anyone? lain Duncan Smith, meanwhile, would definitely be a Charles X: arid as the Sahara and wedded to the old imperial ways of Thatcherism.

The only possible leadership candidate who doesn't resemble a loony Bourbon is Kenneth Clarke. Physically he looks a bit like fat Louis XVIII, but he is one of the few Tories who appears to have learned something. Michael Portillo may indeed have learned something too but, unfortunately, he looks as if he is suffering from a mild case of febrility and, as Oscar Wilde said, to be is nothing but to look is everything.

Talking of Oscar Wilde, I recently visited West Wycombe Park, the home of the Dashwood family. They have some papers there about John Wilkes, whose life I am writing. The current baronet, Sir Edward Dashwood, mumbled something about there being filming at the house. This had slipped my mind when I arrived in Buckinghamshire. The house was surrounded by production vans and men bearing heavy cables. I assumed that they were shooting some worthy BBC 2 documentary about horticulture or English furniture. So I

tripped over the cables and went and sat on a piano stool in the music room.

I must have dozed off and begun to dream, for when I looked up in my dream there were two men in the room. One was Colin Firth and the other was Rupert Everett. 'Go away,' I mumbled. Then my host appeared. This seemed too much like a coincidence. He bid me a cheery hello and asked if I would prefer wine or beer. Then he explained that they were using the house to film The Importance of Being Earnest, with Firth and Everett playing Jack and Algy. This arrangement seemed like a good wheeze for Dashwood. The film company had repainted his hall, made other slight improvements to the house and was paying him some gargantuan sum of money. I wondered if I could persuade a film company to use my house as its set. But to what production could it play host? Instead of the Last of the Mohicans, perhaps the Last of the Hungatians. Or yet another remake of Psycho, the weirder the better.

A few weeks ago I had to attend a charity evening when one of the raffle prizes was a vasectomy. Seriously. A vasectomy. Not a vasectomy or a choice of £500 or a weekend break in the Chilterns. But just a vasectomy, pure and brutal. God save me from being responsible for someone else's vasectomy. Needless to say the evening was attended largely by Tories.