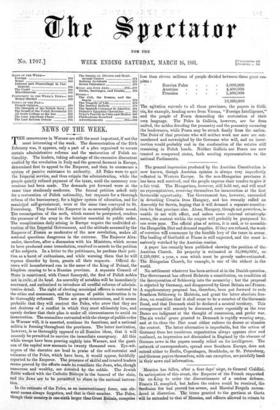 THE occurrences in Warsaw are still the most important, if not the most interesting of the week. The demonstration of the '25th February was, it appears, only a part of a plan organized to secure certain administrative reforms and the restoration of Polish na- tionality. The leaders, taking advantage of the excessive discontent excited by the revolution in Italy and the general ferment in Europe, determined first to appeal to the Emperor, and then to commence a system of passive resistance to authority. All Poles were to quit the Imperial Service, and thus cripple the administration, while the people quietly refused payment of the taxes, until the necessary con- cessions had been made. The demands put forward were at the same time studiously moderate. The formal petition asked. only for a restoration-of .Polish nationality, but requests for a thavingh reform of the bureaucracy, for 'a higher system of education, and for municipal self-government, were at tile slime time conveyed to St. Petersburg. They found the Emperor in an unusually pliable mood. 'the emancipation of the serfs, which cannot be postponed, renders the presence of the army in the interior essential to public order. The complications daily arising in Europe require the undivided at- tention of the Imperial Government, and the attitude assumed by the EMperor of France as moderator of the new revolution, makes all national questions dangerous in the extreme. The Emperor Alex- ander, therefore, after a discussion with his Ministers, Which seems to have produced some irresolution, resolved to accede to the petition of his subjects. In a letter to the petitioners, he pardons their peti- tion as a bind of enthusiasm, and while warning them that he will repress disorder by force, grants all their requests. Official de- crees will henceforward run in the name of the King of Poland, the kingdom. ceasing to be a Russian province. A separate Council of State is sanctioned, with Count Zamoyski, the first of Polish nobles not in 'exile, at its head. An assembly of notables will be immediately convened, and authorized to introduce all needful reforms of adminis- trative detail. The right of electing municipal officers is restored to the cities and communes, and the system of public instruction is to be thoroughly reformed: These are great concessions, and it seems probable that they will content the Poles, who avow that they are not desirous of a' conflict in which thel must ultimately lose, and openly declare that their plan is under.all circumstances to av,oid an insurrection. The committee entrusted with the charge of public order in Warsaw will, it is asserted, continue its functions, and a national militia is formingthroughout the provinces. The latter institution, however, is so thoroughly opposed to all Russian ideas, that it will scarcely he permitted to survive the immediate emergency. All this while troops have been pouring nightly into Warsaw, and the garri- son of the capital now amounts to twenty thousand men. Eye-wit- nekses, of the ementes are lend in praise of the self-restraint and calmness of the Pole's, which have been, it woad appear, faithfully reported to the Emperor. The Presence of skilful and trusted leaders seems proved by the efforts made .to. conciliate the Jews, who; though numerous and wealthy, are detested by. the rabble. The Jewish RA.bbi walked with the Catholic Bishops in the funeral of the slain, and the Jews are to be permitted to share in the national instruc- tion.

In the estimate of the Poles, as an insurrectionary force, one ele- inent seems always forgotten, and that is their number. The Poles, though their country is one-sixth larger than Great Britain, comprise less than eleven millions of people divided between three great em- pires: Russian Poles - 5,000,000 Austrian - 4,400,000 Prussian - - 1,400,000 • 10,800,000 The agitation extends to all these provinces, the papers in Gall- * for example, heading news from Vienna, "Foreign Intelligence," and the people of Posen demanding the restoration of their own language. The Poles in Galicia, however, are far from united, the nobles dreading the peasantry and the peasantry menacing the landowners, while Posen may be struck finally from the nation. The Polef of that province who will neither work nor save are out- numbered and outweighed by the Germans who will, and an insur- rection would probably end in the confiscation of the estates still remaining in Polish hands. Neither Gallicia nor Posen are now treated as conquered states, both sending representatives to the national Parliaments.