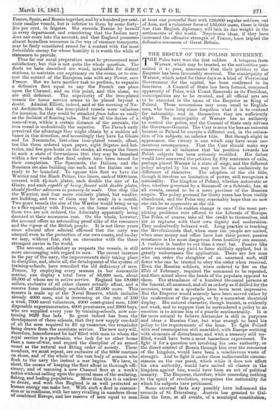 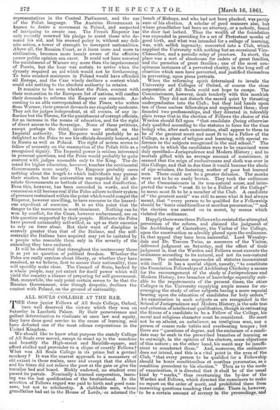 THE RESULT OF THE POLISH MOVEMTINT. T HE Poles have won

the first rubber. A telegram from Warsaw, which may be trusted, as the authorities per- mitted it to pass, announces that their petition to the Emperor has been favourably received. The municipality of Warsaw, which acted for three days as a kind of Provisional Government for the capital, has been confirmed in its functions. A Council of State has been formed, composed apparently of Poles, with Count Zamorski as its President, municipalities are to be created, and all official acts are to be executed in the name of the Emperor as King of Poland. These concessions may seem small to English- men, who have long since forgotten what it is to contend for nationality, and in themselves they are sufficiently slight. The municipality of Warsaw has no authority to control the police, and the Council of State only advises the Governor-General. The Czar is none the less an autocrat because in Poland he accepts a different and, in the estima- tion of his subjects, an inferior title. But though slight in appearance, the victory is one which may have most mo- mentous consequences. That the Czar should make any concession at all indicates that his position towards his Polish subjects has been seriously modified. His father would have answered the petition by fifty sentences of exile, perhaps placed Warsaw in a state of siege, and the different policy adopted by his son may not be due exclusively to difference of character. The adoption of the old title, though it involves no limitation of power, still recognizes a nationality. The kingdom of Poland, whether autocratic or free, whether governed by a Romanoff or a Sobieski, bas, at all events, ceased to be a mere province of the Russian empire. The policy pursued for thirty years has been visibly abandoned, and the Poles may reasonably hope that no new one can be so oppressive as the old.

The cause of this sudden change is one of the most per- plexing problems ever offered to the Liberals of Europe. The Poles, of course, take all the credit to themselves, and are in raptures with their own dignity and moderation. They undoubtedly behaved well. Long practice is teaching the Revolutionists that, when once the people are united, when once money and office have lost their power, passive resistance is the most dangerous form hostility can assume. A cushion is harder to cut than a steel bar. Passive like active resistance may yield to force skilfully applied, but it greatly embarrasses the application. There are few men who can order the slaughter of an unarmed mob, still fewer who can be trusted to obey the order when received. Even the Russian soldiers, when ordered to fire on the 27th of February, required the command to be repeated, and then aimed above the heads of the populace opposed to them. The attendance of a hundred thousand persons at the funeral, all unarmed, and all as orderly as if drilled for the occasion' must as a spectacle have been most impressive. But the Emperor would scarcely have been moved either by the moderation of the people, or by a somewhat theatrical display. His natural character, though lenient, is evidently not weak, and to suppose that fie surrendered a policy to an emotion is to accuse him of a puerile sentimentality. It is far more natural to believe Alexander is still in purposes and ideas a Russian Czar, but wise enough to bend his policy to the requirements of the hour. To fight Poland with serf emancipation still unsettled, with Europe seething with elements of disturbance, and with a treasury still un- filled, would have been a most hazardous experiment. To fight it for a question not involving his own authority, or the direct control of Russia through him over the resources of the kingdom, would have been a mischievous waste of strength. And to fight it under these unfavourable circum- stances on the one point, which while it does not affect his own authority, would have united all classes in the kingdom against him, would have been an act of political insanity. The Emperor, therefore, while conceding nothing to the spirit of revolution, recognizes the nationality for which his subjects have petitioned. Sonic external facts may possibly have influenced the councils of St. Petersburg. Austria has granted to Gal- licia the form, at all events, of a municipal constitution, representatives in the Central Parliament, and the use of the Polish language. The Austrian Government is known to desire a movement in Poland, and suspected of intriguing to create one. The French Emperor has only recently renewed his pledge to assist those who de- mand his aid, and his avowed policy is, without any defi- nite action, a tower of strength to insurgent nationalities. Above all,.the Russian Court, as it leans more and more to civilization, becomes more keenly aware of the effective power public opinion can exert. It could not have arrested the punishment of Warsaw any more than the imprisonment of Poerio, but the hour was certain to arrive when the dynasty required an aid which would not be forthcoming. To have crushed resistance in Poland would have offended all Europe, and the Czar wisely declines a contest which could add nothing to the absolute authority he retains.

It remains to be seen whether the Poles, content with their restoration to the European list of nations, will confine their demands to reforms the Emperor can concede. Ac- cording to an able correspondent of the Times' who writes from Warsaw, their present demands are singularly moderate. They ask for judges independent, at all events, of any in- fluence but the Throne, for the punishment of corrupt officials, for an increase in the means of education, and for the right of direct access to the Sovereign. None of these petitions, except perhaps the third, involve any attack on the Imperial authority. The Emperor would probably be as delighted as the Poles to see his officials decently honest, and in Russia as well as Poland. The right of access seems to follow of necessity on the resumption of the Polish title as a recognized dignity. The Imperial power is seldom interested in personal questions, and the Poles would probably be quite content with judges amenable only to the King. The de- mand for higher education, however, touches the continental Governments more nearly. The Emperor probably cares nothing about the length to which individuals may pursue their studies, but the universities are regarded by all ab- solute Governments as hotbeds of theories and disaffection. Even this, however, has been conceded in words, and the concession will become real if the Poles adhere to their system of pressure restrained within the point which would compel the Emperor, however unwilling, to have recourse to the hazard- ous expedient of coercion. It is on this point that the danger to the movement is most imminent. Nothing can be won by conflict, for the Czars, however embarrassed, are on this question supported by their people. Hitherto the Poles have proved untameably self-willed, as apt as their enemies to rely on force alone. But their want of discipline is scarcely greater than that of the Italians, and the self- restraint the Italians have acquired may yet be imitated by a people who resemble them only in the severity of the annealing they have endured. It will be observed that throughout tbe controversy there is as yet no question of political freedom. Whether the Poles are really careless about liberty, or whether they have resolved, as we believe, first to secure their nationality, time will speedily make clear. The Council of State, backed by a whole people, may yet extort for itself power which will yield the country a chance of preparing for self-government. But, meanwhile, the only point certain seems to be that the Russian Government; wise though despotic, declines the contest with Poland, on the ground of nationality.