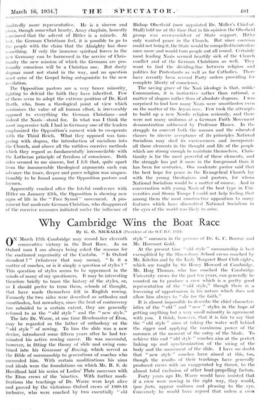 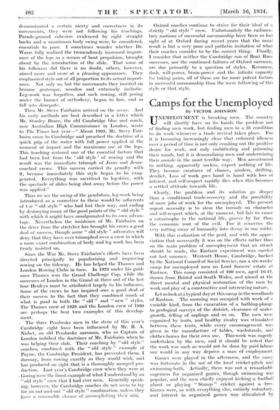 Why Cambridge Wins the Boat Race

By G. 0. NICKALLS (President of the 0.1..T.B.C. 1923) ON March 17th Cambridge may record her eleventh consecutive victory in the Boat Race. As an Oxford man I am always being asked the reasons for the continned superiority of the Cantabs. " Is Oxford decadent ? " (whatever that may mean). " Is it a matter of coaches, or is it simply a question of styles ? " This question of styles seems to be uppermost in the minds of many of my questioners. It may be interesting therefore briefly to trace the history of the styles, or, as I should prefer to term them, schools of thought, that have made themselves felt in English rowing. Formerly the two sides were described as orthodox and unorthodox, but nowadays, since the heat of controversy has subsided to a certain extent, they are generally referred to as the " old style " and the " new style."

The late Dr. Warre, at one time Headmaster of Eton, may be regarded as the father of orthodoxy or the " old style " of rowing. To him the slide was a new device, introduced some fifteen years after he had ter- minated his active rowing career. He was successful, however, in fitting the theory of slide and swing com- bined into his Grammar of Rowing, which served as the Bible of oarsmanship to generations of coaches who succeeded him. With certain modifications his aims and ideals were the foundations on which Mr. R. S. de Havilland laid his series of Ladies' Plate successes with the Eton crews of the 'nineties. With further modi- fications the teachings of Dr. Warre were kept alive and proved by the Victorious Oxford crews of 1909-13 inclusive, Who were coached by two essentially " old style " oarsmen in the persons of 1)r. G. C. Bourne and Mr. Harcourt Gold.

At .the present time " old style " oarsmanship is best exemplified by the Shrewsbury School crews coached by Mr. Kitchin and by the Lady Margaret Boat Club eights, which are taught by Sir Henry Howard at Cambridge. Mr. Haig Thomas, who has coached the Cambridge University crews for the past ten years, can generally be counted on to produce a crew which is a pretty good representation of the " old style," though there is a leavening of opportunism in his nature which does not allow him always to " die for the faith."

It is almost impossible to describe the chief character- istics of the " old " and " new " styles in the hope of getting anything but a very small minority in agreement with you. I think, however, that it is fair to say that the " old style " aims at taking the water well behind the rigger and applying the maximum power of the oarsmen at the moment of the entry of the blade. To achieve this end " old style " coaches aim at the perfect linking up and synchrOnization of the swing of the body and the movement of the slide. I have no doubt that " new style " coaches have aimed at this, too, though the results of their teachings have generally produced crews with an exaggerated leg thrust, to the almost total exclusion of other boat-propelling factors.

Forty years ago Dr. Warre would have insisted that if a crew were rowing in the right way, they would, ipso facto, appear uniform and pleasing to the eye. Conversely he would have argued that unless a crew demonstrated a certain nicety and correctness in its movements, they were not folloiving his teachings. Parade-ground cohesion evidenced by eight straight backs and a unanimous body swing were; he considered, essentials to pace. I sometimes wonder whether Dr. Warre fully realized the tremendously increased import- ance of the legs as a means of boat propulsion, brought about by the introduction of the slide. That some of his followers did there is no doubt, others, however, aimed more and more at a pleasing appearance. They emphasized style out of all proportion to its actual import- ance. Not. only so, but the movements they insisted on became grotesque, wooden and extremely inelastic. Leg-work was forgotten, and such rowing, still posing under the banner of orthodoxy, began to lose, and so fall into disrepute.

Then Mr. Steve Fairbairn arrived on the scene. And his early methods are best described in a letter which Mr. Stanley Bruce, the old Cambridge blue and coach, now Australian High Commissioner in London, wrote to The Times last year—" About 1905, Mr. Steve Fair- bairn came to Cambridge and preached the doctrine of a quick grip of the water with full power applied at the Moment of impact and the maximum use of the legs. This teaching restored one of the essential factors that had been lost from the ' old style ' of rowing and the result was the immediate triumph of Jesus and Jesus- coached crews. This success carried its penalty with it, because immediately this style began to be exag- gerated. Everything was sacrificed to leg-drive, with the spectacle of slides being shot away before the power was applied."

Thus we sec the swing of the pendulum, leg-work being introduced as a corrective to these would-be adherents of tire " old style " who had lost their way, and ending by destroying many of the good points of the " old style " with which it might have amalgamated to its own advan- tage. Nevertheless the insistence of Mr. Fairbairn on the drive from the stretcher has brought his crews a good deal of success, though some " old style " advocates will deny that they have ever triumphed over a crew in which a more exact combination of body and leg work has been firmly insisted on.

Since the War Mr. Steve Fairbairn's efforts have been directed principally to popularizing and improving rowing on the tideway. He has helped the Thames and London Rowing Clubs in turn. In 1928 under his guid- ance Thames won the Grand Challenge Cup, while the ,successes of London in the Grand at three out of the last four Henleys must be attributed largely to his influence. Some of the crews he has inspired owe a good deal of their success to the fact that they combined much of what is good in both the " old " and " new " styles. The Thames crew of 1928 and the London crew of 1930 are perhaps the best two examples of this develop- - ment.

. The three Pembroke men in the stern of this year's Cambridge eight have been influenced by Mr. R. A. Nisbet, an old Pembroke oarsman, who as Captain of London imbibed the doctrines of Mr. Fairbairn when he was helping their club. Their coaching by "old style" coaches, combined with the " old style " example of Payne, the Cambridge President, has prevented them, I daresay, from rowing exactly as they would wish; and . has produced an eight that is a thoroughly mongrel pro- duction. Last year's Cambridge crew when they were at . Goring were the finest example of what I understand bY an "old style " crew that I had ever seen. Generally speak- . ing, however, the Cambridge coaches do not seem to try for an out-and-out " old style " combination, unless they have a reasonable chance of accomplishing their-aiiii. Oxford' Coaches continue to strive for their ideal of a strictly " old style " crew. Unfortunately the rudimen- tary motions of successful oarsmanship have been so lost sight of at Oxford during recent years that the usual result is but a very poor and pathetic imitation of what their coaches consider to be the correct thing. Finally, I consider that neither the Cambridge run of Boat Race successes, nor the continued failures of Oxford oarsmen, are due primarily to a question of styles. Keenness, dash, will-power, brain-power and the infinite capacity for taking pains, all of these are far more potent factors in successful oarsmanship than the mere following of this style or that style.