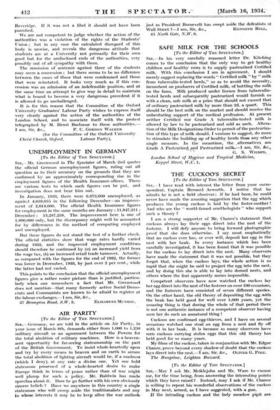 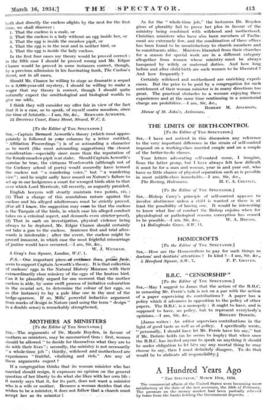 [To the Editor of THE SPECTATOR.] SIR,—May I ask Mr.

Meiklejohn and Mr. Ware to excuse me, for the time being, from answering the interesting points which they have raised ? . Instead, - may I ask if Mr. Chance is willing to repeat his-wonderful observations of the cuckoo - in May next, armed, as have suggested, with a gun. •

In the first four eases my theory would be proved correct : in the fifth. case I should be proved wrong and Mr. Edgar Chance would be proved in some instances correct, though, by a previous admission in his fascinating book, The Cuckoo's Secret, not in all cases.

Should Mr. Chance be willing to stage so dramatic a sequel to a 8,000-year-old -mystery,- I 'should be willing to make a' wager that my theory is correct, though I should quite naturally expect the ornithological and biological worlds to give me odds. '

I think they will consider my offer fair in view of the fact that it is a case, so to speak, of myself contra mundum, since the time of Aristotle.=I iun, Sir, &c., BERNARD ACWORTH.