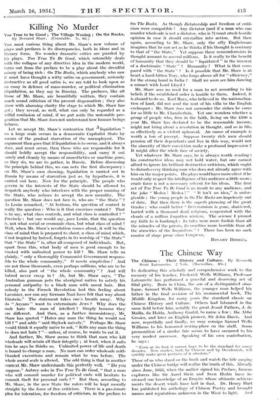 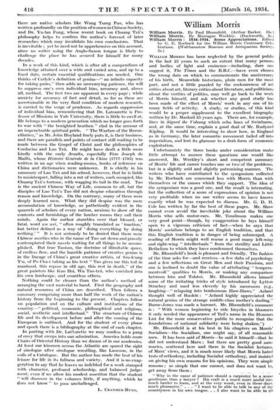 The Chinese : Their History and Culture. By Kenneth Scott Latourette. 2 Vole. (Macmillan. 30s.) IN dedicating this scholarly and comprehensive work to the memory of his teacher, Frederick Wells Williams, Professor

Latourette has performed a graceful and deserving act of filial piety. Born in China, the son of a distinguished sino-

logue, Samuel Wells Williams, the younger man helped his father in the final revision of his monumental book, The Middle Kingdom, for many years the standard classic on Chinese History and Culture. Others had laboured in the same field before him, notably the great Jesuit Fathers, J. de

Mania, du Halda, Anthony Gaubil, to name a few ; the Abbe Crosier, and later an English pioneer, Sir John Davis. And now, regretfully and finally, we may consign Samuel Wells Williams to his honoured resting-place on the shelf. Some premonition of a similar fate seems to have occurred to his very modest successor. Speaking of his own contribution, he says :

" Even at its best it cannot hope to be the standard for many decades. New studies, both by Chinese and by Occidentals, will quickly make great portions of it obsolete."

Those of us who stand on the bank and watch the tide suu•ging under the Chinese bridge will realize the truth of this. Already since June, 193.3, when the author signed his Preface, famous explorers like Sir Aurel Stein and Sven Hedin have in-

creased our knowledge of an Empire whose ultimate achieve- ments the desert winds have laid in dust. Dr. Henry Hart has published his anthology of Chinese Poetry and brought names and reputations unknown in the West to light. And there are native scholars like Wang Tsang Pao, who has written profoundly on the position of women in Chinese Society, and Dr. Yu-lan Fung, whose recent book on Chuang Tzfes philosophy helps to confirm the author's forecast of later researches which may invalidate his own conclusions. That is inevitable ; yet he need not be apprehensive on this account, since no writer using the Anglo-Saxon tongue is likely to challenge the place he has secured for himself for many decades.

In a work of this kind, which is after all a compendium of knowledge attained over a wide and varied area, and up to a fixed date, certain essential qualifications are needed. One thinks of Carlyle's definition of genius—" an infinite capacity for taking pains," then adds an unwearying patience, the will to suppress one's own individual bias, accuracy and, above all, method. The first two are apparent in every page ; while anxiety for accuracy of fact and detail, so far as these are ascertainable in the very fluid condition of modern research, is carried to the verge of prudence. As regards suppression of individual bias, remembering that Dr. Latourette is Pro- fessor of Missions in Yale University, there is little to cavil at. He belongs to a modern generation which no longer goes forth to war with " the benighted heathen " clad in the armour of an impenetrable spiritual pride. " The Warfare of the Recon- eiliatioa," as Mr. John Hoyland finely puts it, is their business, and there are parallels and points of contact still waiting to be made between the Gospel of Christ and the philosophies of Confucius and Lao TzU. He might have dealt a little more kindly with the early Jesuits, especially Pere Joseph de Mailla, whose Histoire Generale de la Chine (1777-1785) was written in an age when reading-rooms, books of reference on China and dictionaries were unknown. It is chiefly in his summary of Lao Tza and his school, however, that he is liable to misinterpret:, falling into a rut of writers, each occupied, like Chuang Tz a's tortoise, with wagging its tail in the mud. Tao is the ancient Chinese Way of Life, common to all, but the disciples of Lao Tzii's Tao did not despise education through reason and knowledge. On the contrary, many of them were deeply learned men. What they did despise was the mere accumulation of knowledge, so pathetically evident in the quarrels of scholars of every nation, anxious to show off the contents and furnishings of the lumber rooms they call their minds. Again the author stumbles over that blessed, or fatal, word wu wei, " often roughly translated as ' inaction,' but better defined as a way of ` doing everything by doing nothing.' " It is not seriously to be denied that there were Chinese ascetics who in the name of Tao sat down and gravely contemplated their navels waiting for all things to be accom- plished. But true Taoism, the doctrine of illimitable space, of endless flow, and the humble patience of creative genius is in the lineage of China's great creative artists, of Ssu-kung

T‘u, of Po taking as his text " Tao gives me this toil in manhood, this repose in old age, this rest in death," of the great painters like Kuo Hsi, Wu Tao-tzu, who vanished into his own landscape, and countless others.

Nothing could be clearer than the author's method of arranging the vast material to hand. First the geography and natural resources of China arc described. Then follows a summary comprising more than half the work of the nation's history from the beginning to the present. Chapters follow on population and on the culture and institutions of the country—" political, economic, philosophical and religious, social, aesthetic and intellectual." The structure of Chinese life and its development before and after the coming of the European is outlined. And for the student of every phase and epoch there is a bibliography at the end of each chapter.

In parting with Dr. Lat5arette we may confess to a pang of envy that creeps into our admiration. America holds more Chairs of Oriental History than we dream of in our academies. At least our kinsmen across the Atlantic are spared the sight of sinologue after sinologue wrestling, like Laocoon, in the coils of a Catalogue. But the author has made the best of his leisure for life in its fullness and variety. And it is no exag- geration to say that he leaves us indebted for a work stamped with character, profound scholarship, and balaheed judge- ment, even if we allow his modest assertion that the student " will discover in the volumes little, if anything, which he does not know " to pass unchallenged.