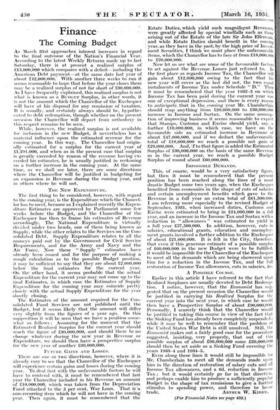 As March 31st approaches interest increases in regard to the final outcome of the Nation's Financial Year. According to the latest Weekly Returns made up to last Saturday, there is at present a realized surplus of £15,000,000 which compares with a deficit—including the American Debt payment—at the same date last year of about £42,000,000. With another three weeks to run it seems reasonable to hope that before the year closes there may be a realized surplus of not far short of £30,000,000. As I have frequently explained, this realized surplus is not what is known as a BUDGET Surplus, in other words, it is not the amount which the Chancellor of the Exchequer will have at his disposal for any remission of taxation. It is usually, and certainly always should be, hypothe- cated to debt redemption, though whether on the present occasion the Chancellor- will depart froth orthodoxy in this respect remains to be seen.

While, however, the realized surplus is not available for inclusion in pre new Budget; it , nevertheless has a material influence- upon the estimated revenue for the coming year. In this way. The Chancellor had origin- ally estimated for a surplus for the current year of £1,291,000, and when as in the present case that surplus is greatly exceeded by reason of the revenue having ex- ceeded his estimates, he is usually justified in reckoning on a further increase in the coming year. At the same time, as we shall see later, there are some directions where the Chancellor will be justified in budgeting for an expansion in Revenue during the coming year, and in others where he will not.

The first thing to be considered, however, with regard to the coming year, is the Expenditure which the Chancel- lor has to meet, because as I explained recently the Expen- diture Estimates are approved by Parliament some few weeks before the Budget, and the Chancellor of the Exchequer has then to frame his estimates of Revenue accordingly. The National Expenditure is virtually divided under two heads, one of them being known as 'Supply, while the other relates to the Services on the Con- solidated Debt. out 'Expenditure . relates to all the . moneys paid out by the Government for Civil Service Requirements, and for the Army and Navy and the Air Force. Now these " Supply " estimates have • already been issued and for the purpose of making a rough calculation as to the possible Budget position, it may be sufficient to say that they are about £2,000,000 below the final estimates for the current year. _ • On the other hand, it seems probable that the actual Expenditure for the current year may not come up to the final Estimates, in which case the Estimates of Supply Expenditure for the coming year, may coincide pretty closely with the actual Supply Expenditure for the year shorty closing. The Estimates of the amount required for the Con- solidated Fund Services are not published until the. Budget, but it seems likely that the amount will differ very slightly from the figures of a year ago. On this supposition it will be seen thatwe have a position-some- what as follows : Assuming for, the moment that the Estimated Realized Surplus for the current year should reach the figure of £30,000,000,_ and should there be change whatever during the new year in Revenue or Expenditure, we- should then_ have a prospective surplus for the new year of another £30;000,000.

There arc one or two directions, however, where it is already easy to sec that the Chancellcir of the Exchequer will experience certain gains and losses during the coming year. To deal first with the unfavourable factors he will have to contend with, -it 'Must be' remembered that last year the Chancellor included in his Revenue an, amount of £10,000,000, which was taken from the DepreciatiOn Fund attached to the 5 per cent.. War Loan. That iS"20.- non-recurring item which he will not have in the coming; year. Then again, it must be remembered that the Estate Duties, which yield such magnificent Revenues, were greatly affected by special windfalls such as those arising out of the Estate of the late Sir John Ellerrnan, and while Estate Duties should benefit in the coining year, as they have in the past, by-.the high price of Invest- ment Securities, I think we must place the unfavourable items, which the Chancellor has to face at from 118,000,000 to £20,000,000.

Now let us see what are some of the favourable factors to set against the RevenuefLosses just referred to. In the first place as regards Income Tax, the Chancellor will gain about £12,090,000 owing to the fact that his new year will cover as the last did not, the two equal instalments of Income Tax under Schedule " D." Then it must be remembered that the year 1932-3 on which Income Tax has been paid during the current year was one of exceptional depression, and there is every reason to anticipate_ that in the...coming year Mr. Chamberlain should reap. anything from £20,000,000 to £30,000,000 increase in Income and Surtax. On the smile assump- tion of improving business it seems reasonable to expect that Stamps, Customs and Excise shbuld yield, say, a further £10,000,000; in which case, we have on the favourable side an estimated increase in Revenue of about £47,000,000, and if we deduct the unfavourable total of £18,000,000 we reach a possible net gain of £29,000,000. And, if to that figure is added the Estimated Surplus of £30,000,000 on the basis of the same Revenue as in the current year, we reach a possible Budget Surplus of round about £60,000,000.

This, of course, would be a very satisfactory figure, but then it must be remembered that the present position has been reached along the lines of a most drastic Budget some two years ago, when the Exchequer benefited from econorriies in the shape of cuts of salaries and certain unemployment benefits which gave to the Revenue in a full year an extra total of £81,500,000. I am referring more especially to the revised Budget of September, 1931, when increased duties, Customs and Excise were estimated to bring in £24,000,000 in a full year, and an increase in the Income Tax and Surtax with a reduction in " allowances " was estimated to yield in a full year £57,500,000.. In addition, however, cuts in salaries, educational grants, education and unemploy- ment grants involved a further addition to the Exchequer of about 121,000,000. It is felt in the City, therefore, that even if this generous estimate of a possible surplus of £60,000,000 in the new Budget were to be fulfilled, it would be impossible for the Chancellor of the Exchequer to meet all the demands which are being showered upon him for a reduction in the Income Tax, and the full restoration of Income Tax allowances, cuts in salaries, &e.

Earlier in this article I have referred to the fact that Realized Surpluses are usually devoted to Debt Redemp- tion. I notice, however, that the Economist has sug- gested that on the present occasion the Chancellor would be justified in carrying his Realized Surplus for the current year into the next year, in which case he would then have a Prospective Surplus of about £90;000,000. Personally, I scarcely think that the Chancellor would be justified in taking this course in view of the fact that the Sinking Fund has already been completely suspended : while it may be well to remember that the problem of the United States War Debt is still unsolved. Still, the Economist makes out a fairly good case for the procedure suggested, insisting, very properly, that out of this possible surplus of about £90,000,000 some £20,000,000 should then be set aside as a Sinking Fund covering the years 1933-4 and 1934-5.. Even along these lines it would still be impossible for Mr. Chamberlain to meet all the demands made .upon him in the direction of restoration of salary cuts and all Income Tax allowances, and a 6d. reduction in Income Tax ; but it would certainly go far in that direction, and perhaps enable him to produce a sufficiently popular Budget in the shape of tax remissions to give a further stimulus to spending power, and therefore- to home (For Financial Notes see page 482.)