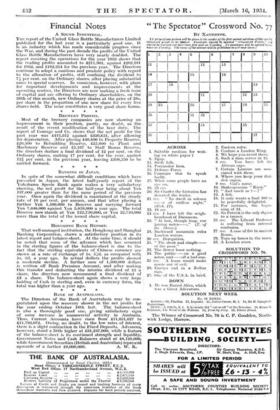 In spite of the somewhat difficult conditions -which have prevailed in Japan, the latest half-yearly report of the Yokohama Specie Bank again makes a very satisfactory showing, the net profit for the half-year being about Yen 197,000 greater than for the same period of the previous year. Once again the dividend is maintained at the steady rate of 10 per cent. per annum, and that 'after placing a further Yen 1,500,000 to Reserve and carrying forward Yen 7,648,000 against Yen 5,859,000 a year ago. The total Reserve now stands at Yen 122,750,000, or Yen 22,750,000 more than the total of the issued share capital.