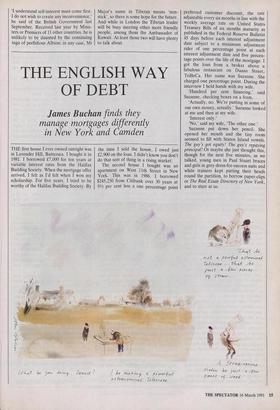 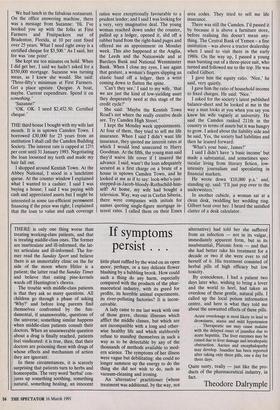 THE ENGLISH WAY OF DEBT

THE first house I ever owned outright was in Lavender Hill, Battersea. I bought it in 1981. I borrowed 0,000 for ten years at variable interest rates from the Halifax Building Society. When the mortgage offer arrived, I felt as I'd felt when I won my scholarship. For five years, I tried to be worthy of the Halifax Building Society. By the time I sold the house, I owed just £2,900 on the loan. I didn't know you don't do that sort of thing in a rising market.

The second house I bought was an apartment on West 11th Street in New York. This was in 1986. I borrowed $245,250 from Citibank over 30 years at 91/2 per cent less a one percentage point preferred customer discount, the rate adjustable every six months in line with the weekly average rate on United States Treasury Bills of six months maturity as published in the Federal Reserve Bulletin 45 days before each interest adjustment date subject to a maximum adjustment rider of one percentage point at each interest adjustment date and five percen- tage points over the life of the mortgage. I got the loan from a broker above a fabulous restaurant on Duane Street, TriBeCa. Her name was Suzanne. She charged one percentage point. During the interview I held hands with my wife. 'Hundred per cent financing,' said Suzanne, checking boxes on a form. 'Actually, no. We're putting in some of our own money, actually.' Suzanne looked at me and then at my wife.

Suzanne put down her pencil. She opened her mouth and the tiny room seemed to fill with Staten Island vowels.

The guy's got equity! The guy's repaying principal! Or maybe she just thought this, though for the next five minutes, as we talked, young men in Paul Stuart braces and girls in grey dress-for-success suits and white trainers kept putting their heads round the partition, to borrow paper-clips or The Real Estate Directory of New York, and to stare at us. We had lunch in the fabulous restaurant. On the office answering machine, there was a message from Suzanne: 'Hi. I've hooked you up with the folks at First Farmers and Fruitpackers out of Bradenton, Florida, at 10 per cent fixed over 25 years. What I need right away is a certified cheque for $3,500.' As I said, her fee was 'one point'.

She kept me ten minutes on hold. When I did get her, I said we hadn't asked for a $350,000 mortgage. Suzanne was turning mean, as I knew she would. She said: 'Three-fifty's minimum at First Farmers. Get a place upstate. Quogue. A boat, maybe. Current expenditure. Spend it on something.'

THE third house I bought with my wife last month. It is in uptown Camden Town. I borrowed £30,000 for 23 years from an institution I shall call the Camden Building Society. The interest rate is capped at 121/2 per cent until 31 January 1993. Negotiating the loan loosened my teeth and made my hair fall out.

I shopped around Kentish Town. At the Abbey National, I stood in a lunchtime queue. At the counter window I explained what I wanted to a cashier. I said I was buying a house; I said I was paying with cash and appreciated assets but I might be interested in some tax-efficient pemienent financing if the price was right; I explained that the loan to value and cash coverage ratios were exceptionally favourable to a prudent lender; and I said I was looking for a very, very imaginative deal. The young woman reached down under the counter, pulled up a ledger, opened it, slid off a rubber band from the right-hand pages and offered me an appointment on Monday week. This also happened at the Anglia, the Leeds and the Nationwide and at Barclays Bank and National Westminster Bank. When I close my eyes, I see again that gesture, a woman's fingers slipping an elastic band off a ledger, then a wrist coming down to flatten the spine.

'Can't they see,' I said to my wife, 'that we are just the kind of low-yielding asset they desperately need at this stage of the credit cycle?'

She said: 'Maybe the Kentish Town Road's not where the really creative deals are. Try Camden High Street.'

I kept the Monday week appointments. At four of them, they tried to sell me life insurance. When I said I didn't want life insurance, they quoted me intereit rates at which I would lend unsecured to Harry Goodman. At the fifth, the young man said they'd waive life cover if I insured the advance. I said, wasn't the loan adequately secured as a first charge on a brute of a house in uptown Camden Town, and he looked at me as if to say: look-who's-just- stepped-in-Jacob-bloody-Rothschild-him- self! At home, my wife had bought a television. Way, way out in Ceefax Siberia, there were companies with initials for names quoting single-figure mortgage in- terest rates. I called them on their Essex area codes. They tried to sell me life insurance.

There was still the Camden. I'd passed it by because it is above a furniture store, before realising this doesn't mean any- thing. The Central Bank of Yemen – a fine institution – was above a tractor dealership when I used to visit there in the early 1980s. On the way up, I passed a young man bursting out of a three-piece suit, who turned and followed me to the top. He was called Gilbert.

I gave him the equity ratio. 'Nice,' he said, very quietly.

I gave him the ratio of household income to fixed charges. He said: 'Nice.'

I asked for the society's latest published balance-sheet and he looked at me in the way a man looks at you when you say you knew his wife vaguely at university. He said the Camden ranked 211th in the country in terms of assets but it was hungry to grow. I asked about the liability side and he said, Yes, the society had liabilities and then he leaned forward: 'What's your basic, James?'

I said I didn't have 'a basic income' but made a substantial, and sometimes spec- tacular living from literary fiction, low- intensity journalism and speculating in financial markets.

In another cubicle, a woman sat at a clean desk, twiddling her wedding ring. Gilbert bent over her. I heard the satisfied clatter of a desk calculator.