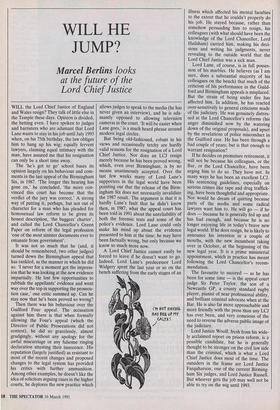 at the future of the Lord Chief Justice

WILL the Lord Chief Justice of England and Wales resign? They talk of little else in the Temple these days. Opinion is divided, the betting even. I have spoken to judges and barristers who are adamant that Lord Lane wants to stay in his job until July 1993 when, on his 75th birthday, the law obliges him to hang up his wig; equally fervent lawyers, claiming equal intimacy with the man, have assured me that his resignation can only be a short time away.

The 'he's got to go' school bases its opinion largely on his behaviour and com- ments in the last appeal of the Birmingham Six, in 1987. 'The longer this hearing has gone on,' he concluded, 'the more con- vinced this court has become that the verdict of the jury was correct.' A strong way of putting it, perhaps, but not out of character for a man who has pleaded for homosexual law reform to be given its honest description, 'the buggers' charter', and called the Lord Chancellor's Green Paper on reform of the legal profession 'one of the most sinister documents ever to emanate from government'.

It was not so much that he (and, it should be remembered, two other judges) turned down the Birmingham appeal that has rankled, as the manner in which he did so. 'I never for a moment got the impress- ion that he was looking at the new evidence impartially. He lost few opportunities to rubbish the appellants' evidence and went way over the top in supporting the prosecu- tion case,' one critic summed up. Can he stay now that he's been proved so wrong?

Then there was his behaviour over the Guilford Four appeal. The accusation against him there is that when formally allowing the Four's appeal (which the Director of Public Prosecutions did not contest), he did so gracelessly, almost grudgingly, without any apology for the awful miscarriage or any fulsome ringing declaration attesting their innocence. His reputation (largely justified) as resistant to most of the recent changes and proposed changes to the legal system has provided his critics with further ammunition. Among other examples, he doesn't like the idea of solicitors arguing cases in the higher courts, he deplores the new practice which allows judges to speak to the media (he has never given an interview), and he is ada- mantly opposed to allowing television cameras in the court. 'It will be easier when Lane goes,' is a much heard phrase around modern legal circles.

But being old-fashioned, robust in his views and occasionally tetchy are hardly valid reasons for the resignation of a Lord Chief Justice. Nor does an LCJ resign merely because he has been proved wrong, which, even over Birmingham, is by no means unanimously accepted. Over the last few weeks many of Lord Lane's supporters in the legal world have been pointing out that the release of the Birm- ingham Six does not necessarily invalidate the 1987 result. The argument is that it is hardly Lane's fault that he didn't know then, in 1987, what the appeal court has been told in 1991 about the unreliability of both the forensic tests and some of the police's evidence. Lord Lane could only make his mind up about the evidence presented to him at the time; he may have been factually wrong, but only because we know so much more now.

A Lord Chief Justice cannot easily be forced to leave if he doesn't want to go. Indeed, Lord Lane's predecessor Lord Widgery spent the last year or so on the bench suffering from the early stages of an illness which affected his mental faculties to the extent that he couldn't properly do his job. He stayed because, rather than somehow persuading him to resign, his colleagues (with what should have been the knowledge of the Lord Chancellor, Lord Hailsham) carried him, making his deci- sions and writing his judgments, never revealing to the outside world that the Lord Chief Justice was a sick man.

Lord Lane, of course, is in full posses- sion of his marbles. He believes (as I am sure, does a substantial majority of his colleagues on the bench) that much of the criticism of his performance in the Guild- ford and Birmingham appeals is misplaced.

But the strain of being under fire has affected him. In addition, he has reacted over-sensitively to general criticisms made of the judiciary. He was genuinely distres- sed at the Lord Chancellor's reforms (his anger diminished now by the watering down of the original proposals), and upset by the revelations of police misconduct in the Guilford case. He has been through a bad couple of years; but is that enough to warrant resignation?

If he decides on premature retirement, it will not be because his colleagues, or the Bar, or the Lord Chancellor, have been urging him to do so. They have not. In many ways he has been an excellent LCJ.

His sentencing guidelines, especially on serious crimes like rape and drug traffick- ing, have been thoughtful and appropriate.

Nor would he dream of quitting because parts of the media and some radical lawyers want him to. He will go — if he does — because he is generally fed up and has had enough, and because he is no longer enjoying life in today's brave new legal world. If he does resign, he is likely to announce his intention in a couple of months, with the new incumbent taking over in October, at the beginning of the new legal year. It is a prime ministerial appointment, which in practice has meant following the Lord Chancellor's recom- mendation.

The favourite to succeed — as he has been for some time — is the appeal court judge Sir Peter Taylor, the son of a Newcastle GP, a county standard rugby player, pianist of near professional ability, and brilliant criminal advocate when at the Bar. He is also far more approachable and more friendly with the press than any LCJ has ever been, and very conscious of the need to reverse the adverse public image of the judiciary.

Lord Justice Woolf, fresh from his wide- ly acclaimed report on prison reform, is a possible candidate, but he is generally thought to be stronger on the civil law side than the criminal, which is what a Lord Chief Justice does most of the time. The outsiders in the frame are Lord Justice Farquharson, one of the current Birming- ham Six judges, and Lord Justice Russell. But whoever gets the job may well not be able to try on the wig until 1993.