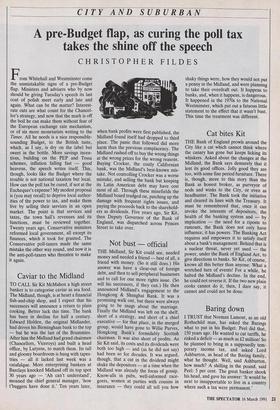 Caviar to the Midland

TO CALL Sir Kit McMahon a high street banker is to categorise caviar as sea food. The Midland, though, is at heart a financial fish-and-chip shop, and I expect that his successors will announce a return to plain cooking. Better luck this time. The bank has been in decline for half a century. Edward Holden, the original Midlander, had driven his Birmingham bank to the top — but he was the last of the Brummies. After him the Midland had grand chairmen (Chancellors, Viceroys) and built a head office, by Lutyens, to match them. Its tall and gloomy boardroom is hung with tapes- tries — all it lacked last week was a catafalque. More enterprising bankers at Barclays knocked Midland off its top spot 30 years ago — `Ah can't understand', moaned the chief general manager, 'how t'buggers have done it.' Ten years later, when bank profits were first published, the Midland found itself had dropped to third place. The panic that followed did more harm than the previous complacency. The Midland rushed off to buy the wrong things at the wrong prices for the wrong reasons. Buying Crocker, the costly Californian bank, was the Midland's best-known mis- take. Not controlling Crocker was a worse mistake, and selling the bank but keeping its Latin American debt may have cost most of all. Through these minefields the Midland board trudged on, patching up the damage with frequent rights issues, and paying the proceeds back to the sharehold- ers as dividends. Five years ago, Sir Kit, then Deputy Governor of the Bank of England, was dispatched across Princes Street to take over.