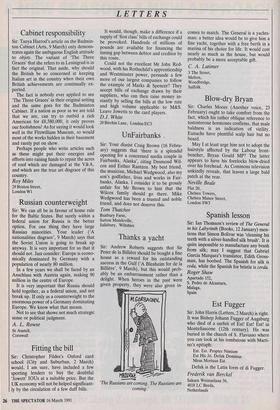 Sir: Charles Moore (Another voice, 23 February) ought to take comfort from the fact, which his rather oblique reference to testosterone hormones confirms, that male baldness is an indication of virility. Eunuchs have plentiful scalp hair but no beard.

May I at least urge him not to adopt the hairstyle affected by the Labour front- bencher, Bryan Gould MP? The latter appears to have his forelocks blow-dried over his forehead. As Commons television unkindly reveals, that leaves a large bald patch at the rear.