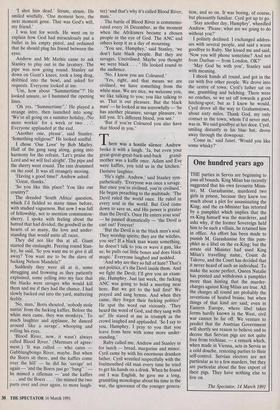 THE parties in Servia are beginning to pass all bounds. King Milan has recently suggested that his own favourite Minis- ter, M. Garashanine, murdered two girls in prison, because they knew too much about a plot for assassinating the King; and the ex-Minister has retorted by a pamphlet which implies that the ex-King himself was the murderer, and asks why, if the former Sovereign held him to be such a villain, he retained him in office. An effort has been made to punish M. Garashanine for this pam- phlet as a libel on the ex-King; but the astute old Minister had used King Milan's travelling name, Count de Takovo, and the Court has decided that it never heard of such an individual. To make the scene perfect, Queen Natalie has printed and withdrawn a pamphlet more than hinting that the murder- charges against King Milan are true. All the charges all round are probably the inventions of heated brains; but when things of that kind are said, even in Eastern Europe, where libel takes forms hardly known in the West, civil war cannot be far off. We venture to predict that the Austrian Government will shortly see reason to believe and to decree that Servian pigs are not quite free from trichinae, — a remark which, when made in Vienna, acts in Servia as a cold douche, restoring parties to their self-control. Servian electors are not particular as to a few murders, but they are particular about the free export of their pigs. They have nothing else to live on.