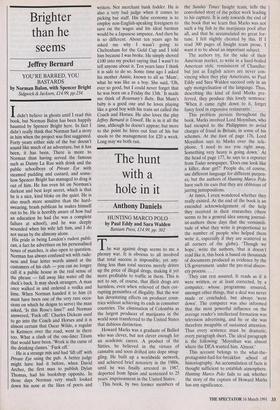 Brighter than he seems

YOU'RE BARRED, YOU BASTARDS by Norman Salon, with Spencer Bright Sidgwick & Jackson, £14.99, pp.234 Ididn't believe in ghosts until I read this book, but Norman Balon has been happily haunted by Spencer Bright here. In fact I didn't really think that Norman had a story in him when the project was first suggested. Forty years either side of the bar doesn't sound like much of an adventure, but it has been, it has been. There is more to Norman than having served the famous such as Danny La Rue with drink and the public schoolboys of Private Eye with steamed pudding and custard, and some- how Spencer Bright has managed to drag it out of him. He has even hit on Norman's darkest and best kept secret, which is that he is a nice, kind bloke on the quiet. He is also much more sensitive than the hard- swearing, brash publican he makes himself out to be. He is horribly aware of how bad an education he had (he was a complete failure at school), and he was deeply wounded when his wife left him, and I do not mean by the alimony alone.

His pride in being London's rudest publi- can, a fact he advertises on his personalised boxes of matches, is also open to question. Norman has always confused wit with rude- ness and four letter words aimed at the customers of his club — you can no longer call it a public house in the real sense of the phrase — fall away like water off the duck's back. It may shock strangers. A man once walked in and ordered a vodka and lime. When Norman handed it to him (it must have been one of the very rare occa- sions on which he deigns to serve) the man asked, 'Is this Rose's lime?' and Norman answered, 'Fuck off.' Charles Dickens used to go into the Coach and Horses and it is almost certain that Oscar Wilde, a regular in Kettners over the road, went in there too. What a clash of the one-liner Titans that would have been. 'Work is the curse of the drinking classes.' Fuck off.'

He is a strange mix and had lift off' with Private Eye using the pub. A better judge might have had it before, when David Archer, the first man to publish Dylan Thomas, had his bookshop opposite. In those days Norman very much looked down his nose at the likes of poets and writers. Not merchant bank fodder. He is also a very bad judge when it comes to picking bar staff. His false economy is to employ non-English-speaking foreigners to save on the wages and his ideal barman would be a Japanese amputee. And then he is so different. About ten years ago he asked me why I wasn't going to Cheltenham for the Gold Cup and I told him because I was broke. He simply shoved £100 into my pocket saying that I wasn't to tell anyone about it. Ten years later I think it is safe to do so. Some time ago I asked his mother Annie, known to all as 'Mum', what he was like as a boy. She said, 'Oh, ever so good, but I could never forget that he was born on a Friday the 13th.' It made me think of Rosemary's Baby. But Mum's baby is a good one and he loves playing like a good boy with his train set called the Coach and Horses. He also loves the play Jeffrey Bernard is Unwell. He is in it all the time, although he doesn't appear; but more to the point he hires out four of his bar stools to the management for £20 a week. Long may we both run.