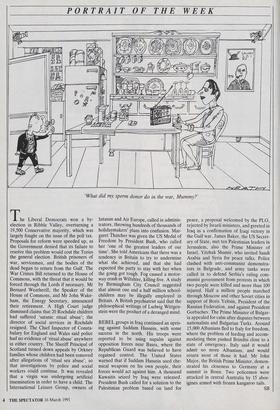 'What did my sperm donor do in the war, Mummy?'

The Liberal Democrats won a by- election in Ribble Valley, overturning a 19,500 Conservative majority, which was largely fought on the issue of the poll tax. Proposals for reform were speeded up, as the Government denied that its failure to resolve this problem would cost the Tories the general election. British prisoners of war, servicemen, and the bodies of the dead began to return from the Gulf. The War Crimes Bill returned to the House of Commons, with the threat that it would be forced through the Lords if necessary. Mr Bernard Weatherill, the Speaker of the House of Commons, and Mr John Wake- ham, the Energy Secretary, announced their retirement. A High Court judge dismissed claims that 20 Rochdale children had suffered 'satanic ritual abuse'; the director of social services in Rochdale resigned. The Chief Inspector of Consta- bulary for England and Wales said police had no evidence of 'ritual abuse' anywhere in either country. The Sheriff Principal of Scotland turned down appeals by Orkney families whose children had been removed after allegations of 'ritual sex abuse', so that investigations by police and social workers could continue. It was revealed that a virgin was undergoing artificial insemination in order to have a child. The International Leisure Group, owners of Intasun and Air Europe, called in adminis- trators, throwing hundreds of thousands of holidaymakers' plans into confusion. Mar- garet Thatcher was given the US Medal of Freedom by President Bush, who called her 'one of the greatest leaders of our time'. She told Americans that there was a tendency in Britain to try to undermine what she achieved, and that she had expected the party to stay with her when the going got tough. Fog caused a motor- way crash in Wiltshire, killing five. A study by Birmingham City Council suggested that almost one and a half million school- children may be illegally employed in Britain. A British psychiatrist said that the philosophical writings of Ludwig Wittgen- stein were the product of a deranged mind.

REBEL groups in Iraq continued an upris- ing against Saddam Hussein, with some success in the north. His troops were reported to be using napalm against opposition forces near Basra, where the Republican Guard was believed to have regained control. The United States warned that if Saddam Hussein used che- mical weapons on his own people, their forces would act against him. A thousand Kuwaitis seized by Iraq were released. President Bush called for a solution to the Palestinian problem based on land for peace, a proposal welcomed by the PLO, rejected by Israeli ministers, and greeted in Iraq as a confirmation of Iraqi victory in the Gulf war. James Baker, the US Secret- ary of State, met ten Palestinian leaders in Jerusalem, also the Prime Minister of Israel, Yitzhak Shamir, who invited Saudi Arabia and Syria for peace talks. Police clashed with anti-communist demonstra- tors in Belgrade, and army tanks were called in to defend Serbia's ruling com- munist government from protests in which two people were killed and more than 100 injured. Half a million people marched through Moscow and other Soviet cities in support of Boris Yeltsin, President of the Russian Federation, and against President Gorbachev. The Prime Minister of Bulgar- ia appealed for calm after disputes between nationalists and Bulgarian Turks. Around 15,000 Albanians fled to Italy for freedom, where the problem of feeding and accom- modating them pushed Brindisi close to a state of emergency. Italy said it would admit no more Albanians, and would return most of those it had. Mr John Major, the British Prime Minister, demon- strated his closeness to Germany at a summit in Bonn. Two policemen were attacked in central Australia by 15 abor- igines armed with frozen kangaroo tails.