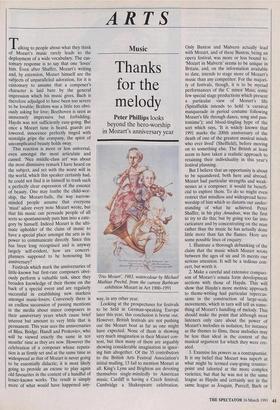 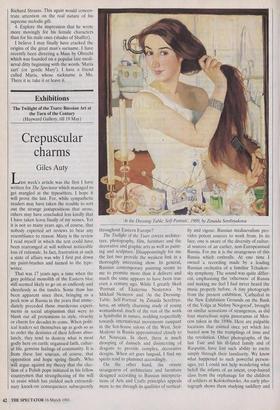 Thanks for the melody

Peter Phillips looks beyond the hero-worship in Mozart's anniversary year

Talking to people about what they think of Mozart's music rarely leads to the deployment of a wide vocabulary. The cus- tomary response is to say that one 'loves' him. Even after Shaffer, Mozart's writing and, by extension, Mozart himself are the subjects of unparalleled adoration, for it is customary to assume that a composer's character is laid bare by the general impression which his music gives. Bach is therefore adjudged to have been too severe to be lovable; Brahms was a little too obvi- ously asking for love; Beethoven is seen as immensely impressive but forbidding; Haydn was not sufficiently easy-going. But once a Mozart tune is heard, guards are lowered, innocence perfectly tinged with nostalgia grips the company, the spirit of uncomplicated beauty holds sway.

This reaction is more or less universal, even amongst the most articulate and cussed. 'Nice middle-class art' was about the most dismissive remark I have heard on the subject, and yet with the worst will in the world, which this speaker certainly had, he could not find it in himself to trash such a perfectly clear expression of the essence of beauty. One may loathe the child-wor- ship, the Mozart-balls, the way narrow- minded people assume that everyone 'must' adore every note Mozart wrote, but that his music can persuade people of all sorts so spontaneously puts him into a cate- gory by himself. Indeed Mozart is the ulti- mate upholder of the claim of music to have a special place amongst the arts in its power to communicate directly. Since this has been long recognised and is anyway largely self-evident, how are concert- planners supposed to be honouring his anniversary? Festivals which mark the anniversaries of little-known but first-rate composers obvi- ously perform a valuable task, since they broaden knowledge of their theme on the back of a special event and are regularly successful in establishing new markets amongst music-lovers. Conversely there is an endless succession of passing mentions in the media about minor composers in their anniversary years which cause brief interest but amount to very little that is permanent. This year sees the anniversaries of Bliss, Bridge, Handl and Prokoviev, who will be viewed exactly the same in ten months' time as they are now. However the celebration of a composer whose reputa- tion is as firmly set and at the same time as widespread as that of Mozart is never going to be essentially didactic; it is most likely going to provide an excuse to play again old favourites in the context of a handful of lesser-known works. The result is simply more of what would have happened any- way, in any other year.

Looking at the prospectuses for festivals to be held in German-speaking Europe later this year, this conclusion is borne out. However, British festivals are not pushing out the Mozart boat as far as one might have expected. None of them is showing very much imagination in their Mozart con- tent, but then many of them are arguably showing considerable imagination in ignor- ing him altogether. Of the 35 contributors to the British Arts Festival Association's initial mailing, 13 fail to mention Mozart at all. King's Lynn and Brighton are devoting themselves single-mindedly to American music. Cardiff is having a Czech festival; Cambridge a Shakespeare celebration. Only Buxton and Malvern actually lead with Mozart, and of these Buxton, being an opera festival, was more or less bound to. 'Mozart in Malvern' seems to be unique in Britain, and, on the information available to date, intends to stage more of Mozart's music than any competitor. For the majori- ty of festivals, though, it is to be myriad performances of the C minor Mass; some few special stage productions which present a particular view of Mozart's life (Spitalfields intends to hold 'a carnival masquerade in period costume following Mozart's life through dance, song and pan- tomime'); and blood-tingling hype of the sort which says, 'It is widely known that 1991 marks the 200th anniversary of the death of one of the greatest musical minds who ever lived' (Sheffield), before moving on to something else. The British at least seem to have taken a realistic approach to retaining their individuality in this year's festival planning.

But I believe that an opportunity is about to be squandered, both here and abroad. Mozart had particular strengths and weak- nesses as a composer; it would be benefi- cial to explore them. To do so might even restrict that mindless and widespread hero- worship of him which so distorts our under- standing of what he achieved. Peter Shaffer, in his play Amadeus, was the first to try to do this; but by going too far into caricature and by concentrating on the man rather than the music he has actually done little more than fan the flames. Here are some possible lines of enquiry: 1. Illustrate a thorough debunking of the claim that the music which Mozart wrote between the ages of six and 16 merits our serious attention. It will be a tedious con- cert, but worth it.

2. Make a careful and extensive compari- son of Mozart's sonata form development sections with those of Haydn. This will show that Haydn's more motivic approach to theme-writing had particular repercus- sions in the construction of large-scale movements, which in turn will tell us some- thing of Mozart's handling of melody. This should make the point that although most listeners only care about the power of Mozart's melodies in isolation, for instance as the themes to films, these melodies may be less than ideal in the context of the musical argument for which they were cre- ated.

3. Examine his powers as a contrapuntist. It is my belief that Mozart was superb at what might be termed easy-going counter- point and talented at the more complex varieties; but that he was not in the same league as Haydn and certainly not in the same league as Josquin, Purcell, Bach or Richard Strauss. This again would concen- trate attention on the real nature of his supreme melodic gift.

4. Explore the impression that he wrote more movingly for his female characters than for his male ones (shades of Shaffer).

I believe I may finally have cracked the origins of the great man's surname. I have recently been directing a Mass by Obrecht which was founded on a popular late medi- aeval ditty beginning with the words 'Maria zart' (or 'gentle Mary'). I have a friend called Maria, whose nickname is Mo. There it is: take it or leave it.