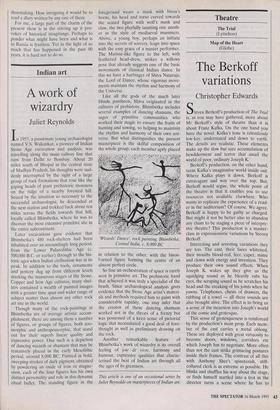 A work of wizardry

In 1957, a passionate young archaeologist named V.S. Wakankar, a pioneer of Indian Stone Age excavation and analysis, was travelling along the main railway line that runs from Delhi to Bombay. About 20 miles south of Bhopal in the central state of Madhya Pradesh, his thoughts were sud- denly interrupted by the sight of a large group of rock formations that rose like the gaping heads of giant prehistoric monsters on the ridge of a nearby forested hill. Seized by the intuition so necessary to the successful archaeologist, he descended at the next station and trekked back about ten miles across the fields towards that hill, locally called Bhimbetka, where he was to discover the most extensive primitive site in the entire subcontinent.

Later excavations gave evidence that Bhimbetka's 480 rock-shelters had been inhabited over an astoundingly long period: from the Lower Palaeolithic Age (c. 500,000 B.C. or earlier) through to the his- toric ages when Indian civilisation was at its peak. In addition to the tools, ornaments and pottery dug up from different levels marking the numerous stages of the Stone, Copper and Iron Age cultures, many shel- ters contained a wealth of painted images with a greater time span and wider range of subject matter than almost any other rock art site in the world.

Though many of the rock-paintings at Bhimbetka are of average artistic accom- plishment, there are among them a number of figures, or groups of figures, both zoo- morphic and anthropomorphic, that stand out for their superb linear quality and expressive power. One such is a depiction of dancing wizards or shamans that may be tentatively placed in the early Mesolithic period, around 8,000 BC. Painted in bold, sweeping strokes of dark pigment, obtained by powdering an oxide of iron or magne- sium, each of the four figures has his own distinct personality and role in this dynamic ritual ballet. The standing figure in the foreground wears a mask with bison's horns, his head and torso curved towards the seated figure with wolf's mask and claw, the two playfully taunting one anoth- er in the style of mediaeval mummers. Above, a young boy, perhaps an initiate into the secrets of sorcery, leaps into space with the easy grace of a master performer. The Matisse-like figure to the left, with feathered head-dress, strikes a willowy pose that already suggests one of the basic movements of classical Indian dance. In this we have a harbinger of Shiva Nataraja, the Lord of Dance, whose vigorous move- ments maintain the rhythm and harmony of the Universe.

Like all the gods of the much later Hindu pantheon, Shiva originated in the cultures of prehistory. Bhimbetka includes several examples of dancing shamans, the sages of primitive communities who worked their magic to ensure the fruits of hunting and sowing, so helping to maintain the rhythm and harmony of their own uni- verse. But what distinguishes the present masterpiece is the skilful composition of the whole group, each member aptly placed 'Wizards' Dance', rock painting, Bhimbetka, Central India, c. 8,000 BC

in relation to the other, with the bison- horned figure forming the centre of an almost perfect circle.

So fine an orchestration of space is rarely seen in primitive art. The prehistoric hand that achieved it was truly a specialist of the brush. Since archaeological analysis gives evidence that the Stone Age artist's materi- als and methods required him to paint with considerable rapidity, one may infer that the creator of these dancing shamans worked not in the throes of a frenzy but was possessed of a keen sense of pictorial logic that necessitated a good deal of fore- thought as well as preliminary drawing on the rock.

Another remarkable feature of Bhimbetka's work of wizardry is its overall feeling of joie de vivre, harmony and humour, expressive qualities that charac- terised the best of Indian art through all the ages of its greatness.

This article is one of an occasional series by Juliet Reynolds on masterpieces of Indian art.