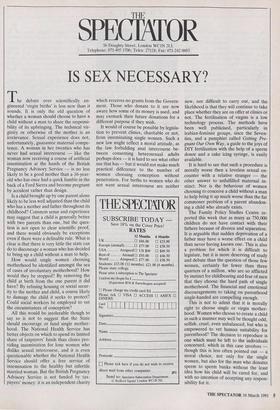 The debate over scientifically en- gineered 'virgin births' is less new than it sounds. It is only the old question of whether a woman should choose to have a child without a man to share the responsi- bility of its upbringing. The technical vir- ginity or otherwise of the mother is an irrelevance. Sexual experience does not, unfortunately, guarantee maternal compe- tence. A woman in her twenties who has never had sexual intercourse — like the woman now receiving a course of artificial insemination at the hands of the British Pregnancy Advisory Service — is no less likely to be a good mother than a 16-year- old who has once had a quick fumble in the back of a Ford Sierra and become pregnant by accident rather than design. Is a child brought up by one parent alone likely to be less well adjusted than the child who has a mother and father throughout its childhood? Common sense and experience may suggest that a child is generally better with two parents than one, but the ques- tion is not open to clear scientific proof, and there would obviously be exceptions even if there were a definable rule. What is clear is that there is very little the state can do to discourage a woman who has decided to bring up a child without a man to help. How would single women choosing motherhood be identified amongst the sea of cases of involuntary motherhood? How would they be stopped? By removing the child at birth from the one parent it did have? By refusing housing or social secur- ity to the mother and child, a course likely to damage the child it seeks to protect? Could social workers be employed to vet the circumstances of conception?

All this would be intolerable though to say so is not to suggest that the State should encourage or fund single mother- hood. The National Health Service has better objects on which to spend its limited share of taxpayers' funds than clinics pro- viding insemination for lone women who dislike sexual intercourse, and it is even questionable whether the National Health Service should offer a free service of insemination to the healthy but infertile married woman. But the British Pregnancy Advisory Service is not funded by tax- payers' money: it is an independent charity which receives no grants from the Govern- ment. Those who donate to it are now aware how some of its money is used, and may earmark their future donations for a different purpose if they wish.

It would of course be possible by legisla- tion to prevent clinics, charitable or not, from inseminating single women. Such a new law might reflect a moral attitude, as the law forbidding anal intercourse be- tween consenting heterosexual adults perhaps does — it is hard to see what other use that has — but it would not make much practical difference to the number of women choosing conception without penetration. For births to women who do not want sexual intercourse are neither new, nor difficult to carry out, and the likelihood is that they will continue to take place whether they are on offer at clinics or not. The fertilisation of virgins is a low technology process. The methods have been well publicised, particularly in lesbian-feminist groups, since the Seven- ties, and a pamphlet called Getting Pre- gnant Our Own Way, a guide to the joys of DIY fertilisation with the help of a sperm donor and a cake icing syringe, is easily available.

It is hard to see that such a procedure is morally worse then a loveless sexual en- counter with a relative stranger — the other answer to unfulfilled maternal in- stinct. Nor is the behaviour of women choosing to conceive a child without a man to help bring it up much worse than the far commoner problem of a parent abandon- ing a child who already exists.

The Family Policy Studies Centre re- ported this week that as many as 750,000 children do not have contact with their fathers because of divorce and separation. It is arguable that sudden deprivation of a father may have a worse effect on a child than never having known one. This is also a problem for which it is difficult to legislate, but it is more deserving of study and debate than the question of those few women, certainly far fewer than three quarters of a million, who are so afflicted by instinct for childbearing and fear of men that they choose the hard path of single motherhood. The financial and emotional discouragements to taking on parenthood single-handed are compelling enough.

This is not to admit that it is morally right to choose single or virgin mother- hood. Women who choose to create a child in such a manner may well be thought odd, selfish, cruel, even unbalanced, but who is empowered to vet human suitability for parenthood? The decision to reproduce is one which must be left to the individuals concerned, which in this case involves — though this is less often pointed out — a moral choice, not only for the single women, but also for the man who donates sperm to sperm banks without the least idea how his child will be cared for, and with no intention of accepting any respon- sibility for it.