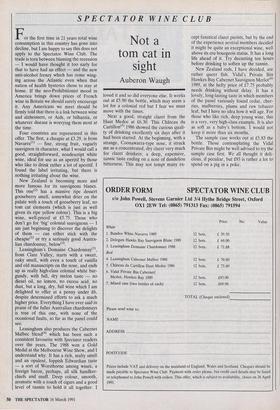 For the first time in 21 years total wine consumption in this country has gone into decline, but I am happy to say this does not apply to the Spectator Wine Club. The trade is torn between blaming the recession — I would have thought it too early for that to have had an effect — and the new anti-alcohol frenzy which has come wing- ing across the Atlantic even when that nation of health hysterics chose to stay at home. lithe neo-Prohibitionist mood in America brings down prices of French wine in Britain we should surely encourage it. Any Americans we meet should be firmly told that there is a link between wine and alzheimers, or Aids, or bilharzia, or whatever disease is worrying them most at the time.

Four countries are represented in this offer. The first, a cheapie at £3.29, is from Navarra(1) — fine, strong fruit, vaguely sauvignon in character, what I would call a good, straightforward, nondescript white wine, ideal for use as an aperitif by those who like to drink rather a lot of aperitif. I found the label irritating, but there is nothing irritating about the wine.

New Zealand is becoming more and more famous for its sauvignons blancs. This one(2) has a massive ripe dessert gooseberry smell, somewhat drier on the palate with a touch of gooseberry leaf, no tom cat elements (which is just as well given its ripe yellow colour). This is a big wine, well-priced at £5.75. Those who don't go for 'big' colonial sauvignons — I am just beginning to discover the delights of them — can either stick with the cheapie(1) or try a seriously good Austra- lian chardonnay, below(3). Leasingham's Domaine Chardonnay(3), from Clare Valley, starts with a sweet, oaky smell, with even a touch of vanilla and old manuscripts on the nose, and ends up as really high-class colonial white bur- gundy, with full, dry melon taste — no diesel oil, no lemon, no excess acid, no dust, but a long, dry, full wine which I am delighted to offer at a penny under £6, despite determined efforts to ask a much higher price. Everything I have ever said in praise of the fuller Australian chardonnays is true of this one, with none of the occasional faults, so far as the panel could see.

Leasingham also produces the Cabernet Malbec blend(4) which has been such a consistent favourite with Spectator readers over the years. The 1988 won a Gold Medal at the Melbourne Wine Show, and I understand why. It has a rich, malty smell and an opulent, foppish Edwardian taste — a sort of Worsthorne among wines, a foreign baron, perhaps, all silk handker- chiefs and snuff. Deep colour, smooth, aromatic with a touch of cigars and a good level of tannin to hold it all together. I

Not a torn cat in sight

loved it and so did everyone else. It works out at £5.90 the bottle, which may seem a lot for a colonial red but I fear we must move with the times.

Next a good, straight claret from the Haut Medoc at £6.30. This Château du Cartillon(5) 1986 showed the curious quali- ty of drinking excellently six days after it had been started. At the beginning, with a strange, Coonawarra-type nose, it struck me as a concentrated, dry claret very much for claret drinkers: a deep, expensive, tannic taste ending on a note of dandelion bitterness. This may not tempt many ex- cept fanatical claret purists, but by the end of the experience several members decided it might be quite an exceptional wine, well above its cru bourgeois status. It has a long life ahead of it. Try decanting ten hours before drinking to soften up the tannin.

New Zealand reds, I have decided, are rather queer fish. Vidal's Private Bin Hawkes Bay Cabernet Sauvignon Merlot(6) 1989, at the hefty price of £7.75 probably needs drinking without delay. It has a lovely, long-lasting taste in which members of the panel variously found cedar, cher- ries, mulberries, plums and raw tobacco leaf, but I have no idea how it will age. For those who like rich, deep young wine, this is a very, very high-class example. It is also as soft as a baby's bottom. I would not keep it more than six months.

The sample case works out at £5.83 the bottle. Those contemplating the Vidal Private Bin might be well advised to try the sample case first. We all thought it deli- cious, if peculiar, but £93 is rather a lot to spend on a pig in a poke.