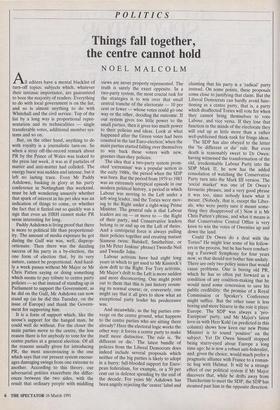 All editors have a mental blacklist of turn-off topics: subjects which, whatever their intrinsic importance, are guaranteed to bore the majority of readers. Everything to do with local government is on the list, and so is almost anything to do with Whitehall and the civil service. Top of the list by a long way is proportional repre- sentation and its technicalities — single transferable votes, additional member sys- tems and so on.

But, on the other hand, anything to do with royalty is a journalistic turn-on. So when a stray off-the-record remark about PR by the Prince of Wales was leaked to the press last week, it was as if particles of matter and anti-matter had collided. The energy burst was sudden and intense, but it left no lasting trace. Even Mr Paddy Ashdown, basking in glory at his party conference in Nottingham this weekend, must be left wondering unsurely whether that spark of interest in his pet idea was an indication of things to come, or whether the fact that it fizzled out so quickly was a sign that even an HRH cannot make PR seem interesting for long.

Paddy Ashdown is living proof that there is more to political life than proportional- ity. The amount of media exposure he got during the Gulf war was, well, disprop- ortionate. Then there was the dazzling success of his party in a by-election, the one form of election that, by its very nature, cannot be proportional. And hard- ly a week passes without Mr Major or Mr Chris Patten saying or doing something which seems to pay tribute to centre party policies — so that instead of standing up in Parliament to support the Government, as he did on the Gulf, Mr Ashdown can now stand up (as he did this Tuesday, on the issue of Europe) and thank the Govern- ment for supporting him. It is a form of support which, like the noose's support for the hanged man, he could well do without. For the closer the main parties move to the centre, the less reason there is for anybody to vote for the centre parties at a general election. Of all the reasons usually given for introducing PR, the most unconvincing is the one which says that our present system encour- ages damaging swings from one extreme to another. According to this theory, our adversarial politics exacerbate the differ- ences between the two sides, with the result that ordinary people with middling views are never properly represented. The truth is surely the exact opposite. In a two-party system, the most crucial task for the strategies is to win over that small central tranche of the electorate — 10 per cent or fewer — whose votes could go one way or the other, deciding the outcome. If our system gives too little power to the small parties, then it gives too much power to their policies and ideas. Look at what happened after the Green votes had been counted in the last Euro-election; when the main parties started falling over themselves to win back those voters with new, greener-than-they policies. The idea that a two-party system prom- oted 'extremism' was a popular notion in the early 1980s, the period when the SDP was born. But the period from 1979 to 1983 was an extremely untypical episode in our modern political history, a period in which Labour was moving to the Left under a left-wing leader, and the Tories were mov- ing to the Right under a right-wing Prime Minister. The general rule is that Labour leaders are on — or move to — the Right of their party, and Conservative leaders belong to or end up on the Left of theirs. And a centripetal force is always pulling their policies together and creating mutant Siamese twins: Butskell, Smitheltine, or (in Mr Peter Jenkins' phrase) Tweedle Neil and Tweedle John.

Labour activists have had eight long years in which to get used to Mr Kinnock's slow drift to the Right. For Tory activists, Mr Major's drift to the Left is more sudden and more disconcerting. One might point out to them that this is just history resum- ing its normal course; or, conversely, one might say that it all goes to show what an exceptional party leader his predecessor was.

And meanwhile, as the big parties con- verge on the centre ground, what happens to the centre parties who are sitting there already? Here the electoral logic works the other way: it forces a centre party to make itself more distinctive. The rule is, 'Be different or die.' The latest bundle of policies from the Liberal Democrats does indeed include several proposals which neither of the big parties is likely to adopt in a hurry: full-blooded support for Euro- pean federalism, for example, or a 50 per cent cut in defence spending by the end of the decade. For years Mr Ashdown has been angrily rejecting the 'centre' label and claiming that his party is a 'radical' party instead. On some points, these proposals come close to justifying that claim. But the Liberal Democrats can hardly avoid func- tioning as a centre party, that is, a party which disaffected Tories will vote for when they cannot bring themselves to vote Labour, and vice versa. If they lose that function in the minds of the electorate they will end up as little more than a rather well-publicised think-tank for fringe ideas.

The SDP has also obeyed to the letter the 'be different or die' rule. But even death is reasonably sweet to Dr Owen: having witnessed the transformation of the old, irredeemable Labour Party into the SDP Mark II, he now has the added consolation of watching the Conservative Party turn into the Mark III version. The 'social market' was one of Dr Owen's favourite phrases, and a very good phrase it was too, since nobody knew what it meant. (Nobody, that is, except the Liber- als, who were pretty sure it meant some- thing they disapproved of.) Now it is Mr Chris Patten's phrase, and what it means is that Conservative Central Office is very keen to win the votes of Owenites up and down the land.

Could Dr Owen do a deal with the Tories? He might lose some of his follow- ers in the process, but he has been conduct- ing a Farewell Symphony for four years now, so that should not bother him unduly. There are only two policy issues that would cause problems. One is boring old PR, which he has so often put forward as a condition of any coalition-making that he would need some concession to save his public credibility: the promise of a Royal Commission or Speaker's Conference might suffice. But the other issue is less boring and more bizarre in the role it plays: Europe. The SDP was always a 'pro- European' party, and Mr Major's latest love-in with Herr Kohl (as predicted in this column) shows how keen our new Prime Minister is to sound 'positive' on the subject. Yet Dr Owen himself stopped being starry-eyed about Europe a long time ago; he is now a robust anti-federalist, and, given the choice, would much prefer a pragmatic alliance with France to a roman- tic hug with Helmut. It will be a strange effect of our political system if Mr Major discovers that, while he drifts away from Thatcherism to meet the SDP, the SDP has steamed past him in the opposite direction.