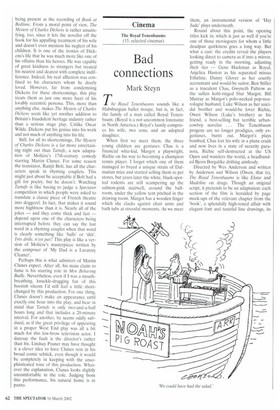 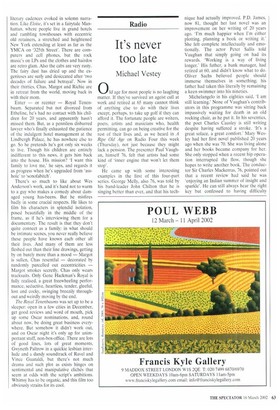 The Royal Tenenbaums sounds like a Habsburgian ballet troupe, but is, in fact, the family of a man called Royal Tenenbaum. (Royal is a not uncommon forename in North America.) Royal's family comprises his wife, two sons, and an adopted daughter.

When first we meet them, the three young children are geniuses: Chas is a financial whiz-kid, Margot a playwright, Richie on his way to becoming a champion tennis player. I forget which one of them managed to breed a unique strain of Dalmatian mice and started selling them to pet stores, but years later the white, black-spotted rodents are still scampering up the salmon-pink stairwell, around the ballroom, under the yellow tent pitched in the drawing room. Margot has a wooden finger which she clacks against chair arms and bath tubs at stressful moments. As we meet

them, an instrumental version of 'Hey Jude' plays underneath.

Round about this point, the opening titles kick in, which is just as well if you're one of those moviegoers for whom a little deadpan quirkiness goes a long way. But what a cast: the credits reveal the players looking direct to camera as if into a mirror, getting ready in the morning, adjusting their ties — Gene Hackman as Royal. Anjelica Huston as his separated missus Etheline, Danny Glover as her courtly accountant and would-be suitor, Ben Stiller as a truculent Chas, Gwyneth Paltrow as the sullen kohl-ringed blur Margot. Bill Murray as Margot's polo-necked pop-neurologist husband, Luke Wilson as her suicidal brother and would-be lover Richie, Owen Wilson (Luke's brother) as his friend, a best-selling but terrible urbancowboy novelist . . . The Tenenbaum progeny are no longer prodigies, only exgeniuses, burnt out. Margot's plays bombed, Chas lost his wife in a plane crash and now lives in a state of security paranoia, Richie self-destructed at the US Open and wanders the world, a headbanded Bjorn Borgalike drifting aimlessly.

Directed by Wes Anderson and written by Anderson and Wilson (Owen, that is), The Royal Tenenbaums is like Eloise and Madeline on drugs. Though an original script, it pretends to be an adaptation: each section of the film is heralded by page mock-ups of the relevant chapter from the 'book', a splendidly high-toned affair with elegant font and tasteful line drawings, its literary cadences evoked in solemn narration. Like Eloise, it's set in a fairytale Manhattan, where people live in grand hotels and rambling townhouses with eccentric old retainers, a stretched and heightened New York extending at least as far as the YMCA on `325th Street', There are computers and cell phones, but the rock music's on LPs and the clothes and hairdos are retro glam. Also the cabs are very rusty. The fairy dust has dried up and the exgeniuses are surly and desiccated after 'two decades of failure and betrayal'. Now in their thirties, Chas, Margot and Richie are in retreat from the world, moving back in with their mom.

Enter — or reenter — Royal Tenenbaum. Separated but not divorced from Etheline, he's had no contact with his children for 20 years, and apparently hasn't missed them. But, as a penniless disbarred lawyer who's finally exhausted the patience of the indulgent hotel management at the Lindbergh Palace, he has nowhere else to go. So he pretends he's got only six weeks to live, Though his children are entirely indifferent to this news, it gets him back into the house. His mission? 'I want this family to love me,' he says, and regards it as progress when he's upgraded from 'asshole' to `sonofabitch'.

There's so much to like about Wes Anderson's work, and it's hard not to warm to a guy who makes a comedy about damaged young has-beens. But he misfires badly in some crucial respects. He likes to film his characters in splendid isolation, posed beautifully in the middle of the frame, as if he's interviewing them for a documentary. The result is that they don't quite connect as a family: in what should be intimate scenes, you never really believe these people have known each other all their lives. And many of them are less fleshed out than their line drawings, getting by on barely more than a mood — Margot is sullen, Chas resentful — decorated by randomly parcelled out eccentricities — Margot smokes secretly, Chas only wears tracksuits, Only Gene Hackman's Royal is fully realised, a great freewheeling performance, seductive, heartless, tender, gleeful, lost and cocky, swinging breezily throughout and weirdly moving by the end.

The Royal Tenenbaums was set up to be a sleeper: open in a few cities in December, get good reviews and word of mouth, pick up some Oscar nominations, and, round about now, be doing great business everywhere. But somehow it didn't work out, and on Oscar night it's only up for unimportant stuff, non-box-office. There are lots of good lines, lots of great moments, Gwyneth Paltrow in a quickie lesbian interlude and a dandy soundtrack of Ravel and Vince Guaraldi, but there's not much drama and such plot as exists hinges on sentimental and manipulative clichés that seem at odds with the script's ambitions. Whimsy has to be organic, and this film too obviously strains for its cool,