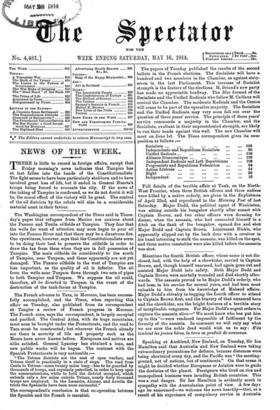 Full details of the terrible affair at Tank, on the

North- West Frontier, when three British officers and three natives were killed by a native orderly, are given in the _Englishman of April 22nd, and reproduced in the Morning Post of last Saturday. Major Dodd, the political agent of Waziristan, was sitting outside his bungalow shortly after sunset with Captain. Brown, and two other officers were dressing for dinner, when the assassin, who had concealed himself in a ditch on the flank of the bungalow, opened fire and shot Major Dodd and Captain Brown. Lieutenant Bickie, who apparently slipped out by the back door with a revolver in his hand intending to stalk the assassin, was killed on the spot, and three native constables were also killed before the assassin was shot.