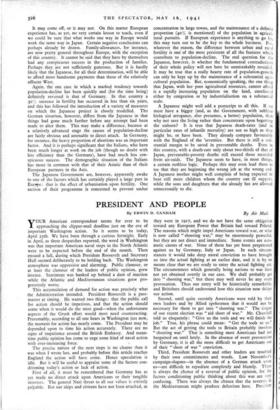 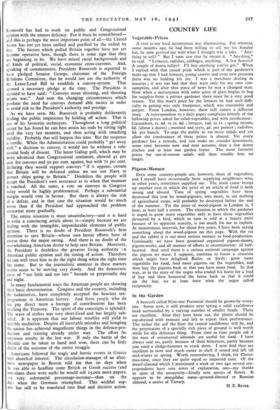 YOUR American correspondent seems for ever to be approaching the clipper-mail deadline just on the eve of important Washington action. So it seems to be today, April 25th. We have been through a curious fortnight. Early in April, as these despatches reported, the word in Washington was that important American naval steps in the North Atlantic were to be expected before the end of the month. Then ensued a lull, during which President Roosevelt and Secretary Hull seemed deliberately to be holding back. The Washington atmosphere was oppressive and alarming. Public clamour, or at least the clamour of the leaders of public opinion, grew intense. Sentiment was banked up behind a dam of inaction while the Atlantic and Mediterranean situations grew pro- gressively worse. This accumulation of demand for action was precisely what the Administration intended. President Roosevelt is a past- master at timing. He wanted two things: that the public call for action should be imperious, and that the action should come when it would do the most good—when the unfortunate aspects of the Greek effort would most need counteracting. Presumably, according to all one hears in Washington just now, the moment for action has nearly come. The President may be depended upon to time his action accurately. There are no signs of impatience around the British Embassy. And mean- time public opinion has come to urge some kind of-naval action with ever-increasing force.

The precise nature of the next steps is no clearer than it was when I wrote last, and probably before this article reaches England the action will have come. Hence speculation is idle. But it will be useful to appraise some of the factors con- ditioning today's action or lack of action. First of all, it must be remembered that Germany has as yet made no direct attack upon Americans or their tangible interests. The general Nazi threat to all our values is entirely palpable. But our ships and citizens have not been attacked, as they were in 1917, and we do not have the same obligation toward any European Power that Britain had toward Poland. The reasons which might impel Americans toward war, or what is now called "shooting war," may be enormously powerful, but they are not direct and immediate. Some events are auto- matic causes of war. None of them has yet been perpetrated against us by Germany, Italy or Japan. In such circum- stances it would take deep moral conviction to have brought us into the actual fighting at an earlier date, and it is by no means clear that we are ready to enter the actual fighting yet. The circumstances which generally bring nations to war have not yet obtained overtly in our case. We shall probably get into "shooting war," but there may well never be any overt provocation. Thus our entry will be historically remarkable, and Britishers should understand how this situation now delays our action.

Second, until quite recently Americans were told by their own leaders and by Allied spokesmen that it would not be necessary for them to get into "shooting war." The slogan of our recent election was "aid short of war." Mr. Churchill told us eloquently: "Give us the tools and we will finish the job." True, his phrase could mean: "Get the tools to us." But the act of getting the tools to Britain probably involves "shooting war." That is something most Americans had not bargained on until lately. In the absence of overt provocation by Germany, it is all the more difficult to get Americans out of their "short of war" conviction.

Third, President Roosevelt and other leaders are troubled by their own commitments and words. Last November's campaign-slogans—in the absence of a German attack mon us—are difficult to repudiate completely and bluntly. There is always the chance of a reversal of public opinion, for the factors conditioning public thinking about this war are very confusing. There was always the chance that the reverses in the Mediterranean might produce defeatism here. President Roosevelt has had to work on public and Congressional opinion with the utmost delicacy. For it must be remembered— and this is perhaps the most important point of all—the United States has not yet been unified and purified by the ordeal by fire. The factors which pulled Britain together have not yet become operative here, though there is some sign that they are beginning to be. We have mixed racial backgrounds and all kinds of political, social, economic cross-currents. And, speaking of commitments, President Roosevelt is reported to have pledged Senator George, chairman of the Foreign Relations Committee, that he would not use the authority of the Lease-Lend Bill to establish a convoy-system. That seemed a necessary pledge at the time. The President is reputed to have said: "Convoys mean shooting, and shooting means war." And now the changing circumstances which produce the need for convoys demand able tactics in order to avoid risk to the President's authority and prestige.

As we have seen, Mr. Roosevelt is probably deliberately feeding the public impatience by holding off action. That is one of his favourite techniques. Throughout a lung political career he has found he can best attain his ends by sitting tight until the very last moment, and then acting with smashing rapidity. Probably that will happen this time. But the suspense is terrific. While the Administration could probably "get away with" a decision to convoy, it would not be without a sub- stantial body of dissent. The latest Gallup poll, which may be more advanced than Congressional sentiment, showed 41 per cent. for convoys and so per cent. against, but with 71 per cent. declaring they would support convoys "if it appears certain that Britain will be defeated unless we use our Navy to protect ships going to Britain." Doubtless the people will accept the President's own assurance as to when that moment is reached. All the same, a vote on convoys in Congress today would be highly problematical. Perhaps a substantial margin would vote in favour. But there is always the risk of a defeat, and in that case the situation would be much worse than if the President had approached the problem somewhat more gradually.

The entire situation is must unsatisfactory—and it is hard to write a convincing article about it—simply because we are dealing with the intangible, imponderable elements of public opinion. There is no doubt of President Roosevelt's firm intention to save Britain—whose own heroic efforts have of course done the major saving. And there is no doubt of the overwhelming American desire to help save Britain. Moreover, the President is doubtless the greatest living authority ‘..,n American public opinion and the timing of action. Therefore we can wtll trust him to do the right thing when the right time has come. But to the journalistic amateur in these matters events seem to be moving very slowly. And the democratic curse of "too little and too late" hounds us perpetually day and night.

In many fundamental ways the American people are showing their basic determination. Congress and the country, including the isolationists, have completely accepted the heaviest tax- programme in American history. And from people who do not pay direct taxes a barrage of contributions has been reaching the Treasury. The spirit of the conscripts is splendid. The wave of strikes was very short-lived and has largely sub- sided. It is apparent that our labour troubles will yield to sensible mediation. Despite all inevitable mistakes and bungling the nation has achieved magnificent things in the defence-pro- duction and training already under way. The effort far surpasses results in the last war. If only the battle of the Atlantic can be taken in hand and won, there can be little doubt of the outcome of the entire struggle.

Americans followed the tragic and heroic events in Greece with absorbed interest: The circulation-manager of an after- noon newspaper in Boston told me that on days when he was able to headline some British or Greek success (and sometimes there were such) he would sell I 5,000 more papers, —a very substantial percentage-increase—than on the days when the Germans triumphed. This wishful sup- port has still to be translated into final and decisive action.