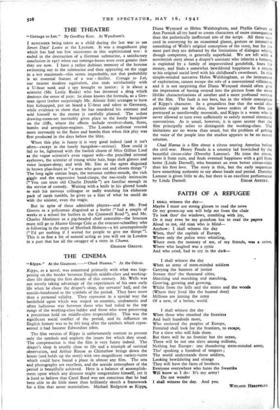 Kipps, as a novel, was concerned primarily with what was hap- pening on the border between English middle-class and working- class life during the first decade of this century. Mr. Wells was not merely taking advantage of the experiences of his own early life when he chose the draper's shop, the servants' hall, and the seaside-bandstand as the symbols of the period. They have more than a personal validity. They represent in a special way the battlefield upon which was waged an anaemic, undramatic and often ludicrous war between those who had toiled to the top rungs of the working-class ladder and those who were preserving a precarious hold on middle-class respectability. This was the significant social conflict of the period, and its influence on English history was to be felt long after the symbols which repre- sented it had become Edwardian jokes.

The film version of Kipps is unfortunately content to present only the symbols and neglects the issues for which they stood. The compensation is that the film is very funny indeed. The draper's shop is cruelly close to life and a triumph of satirical observation, and Arthur Riscoe as Chitterlow brings down the house (and holds up the story) with two magnificent variety-turns which could have found a place in almost any film. The sets and photography are excellent, and the seaside atmosphere of the period is beautifully achieved. Here is a balance of accomplish- ment upon which any director might congratulate himself, yet it is hard to believe that Carol Reed was not conscious that he had been able to do little more than brilliantly sketch a framework for a film that never materialises. Michael Redgrave as Kipps,

Diana Wynyard as Helen Walshingham, and Phyllis Calvert as Ann Pornick all try hard to create characters of more consequence than the pathetically ineffectual trio of the script. All three suc- ceed in conveying by an occasional glance, gesture or intonation something of Wells's original conception of the story, but for the most part they are defeated by the limitations of dialogue which, though competent, is generally superficial. We are left with a novelettish story about a draper's assistant who inherits a fortune, is exploited by a family of impoverished gentlefolk, loses his money, and finds a somewhat bewildered happiness in a return to his original social level with his childhood's sweetheart. In this simple-minded narrative Helen Walshingham, as the instrument of exploitation, cannot escape the role of a conventional villainess, and it is not surprising that Diana Wynyard should Joften give the impression of having strayed into the picture from the more lifelike characterisations of another and a more profound version of the film. The fault is not hers, but in the whole conception of Kipps's character. In a groundless fear that the social dis- parities might not be clear, the lower orders of the film are portrayed as unrelievedly moronish, and Kipps is a worm who is never allowed to turn even sufficiently to satisfy normal cinematic conventions. As is usual, however, it is upon accent that the film principally relies to distinguish the working-class. The imitations are no worse than usual, but the problem of getting the voice of the people into the studios appears to be no nearer solution.

Chad Hanna is a film about a circus touring America before the civil war. Henry Fonda is a country lad bewitched by the beautiful circus-rider (Dorothy Lamour). He joins the circus, saves it from ruin, and finds eventual happiness with a girl from home (Linda Darnell), who becomes an even better circus-rider than his first love. The story is thin, but the early sequences have something authentic to say about locale and period. Dorothy Lamour is given little to do, but there is an excellent performance