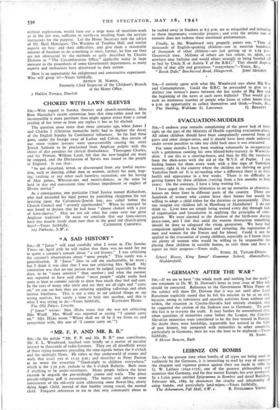 Sm,—I endorse your remarks complaining of the grave lack of fore- sight on the part of the Ministry of Health regarding evacuation-plans. All infant children should have been compulsorily removed from all ports and other danger-areas, and it should have been made unlawful under severe penalties to take any child back once it was evacuated.

For some months I have been working voluntarily in co-operation with a gentleman running his own blitzed-baby-nursery in Warwick- shire. I use this as a clearing-house, and then he fills the vacancies from the dock-areas with the aid of the W.V.S. of Poplar. I am finding homes for them every week with a fine type of Yorkshire woman, right in the country where the children are thriving on good Yorkshire fresh air It is astounding what a difference there is in their health and appearance in a few weeks. There is no difficulty in getting homes for these children (varying from a few months to four years). On the contrary, I have a long waiting list.

I have urged the various Ministries to set up nurseries as clearance- houses on these lines in different parts of the country. There are hundreds of women who cannot leave their homes but would be willing to adopt a child either for the duration or permanently. Does one imagine any children left in Hamburg or Mannheim? I do not think so. Lives here are simply being wasted every day through lack of organisation and irresolution in applying the principles of com- pulsion. We were alarmed at the decrease of the birth-rate during peace-time, and I feel that amid the wanton destruction something should be done to safeguard the rising generation. We have had compulsion applied to the blackout and rationing, the registration of men and women for the Forces and for labour. Could it not be applied to the evacuation of young children, especially as I know there are plenty of women who would be willing to be responsible for placing these children in suitable homes, to visit them and have a report on their progress.—Yours truly,