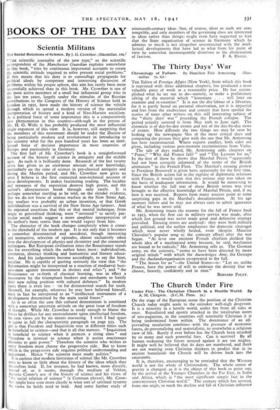 The Social Relations of Science. By J. G. Crowther. (Macmillan. 16s) " THE scientific journalist of the new type," so the scientific correspondent of the Manchester Guardian explains somewhere in this book, "tries by continuous impersonal accounts to create the scientific attitude required to solve present social problems." If this means that his duty is to camouflage propaganda for political ideals by competent and interesting discussion of problems within his proper sphere this aim has rarely been more successfully achieved than in this book. Mr. Crowther is one of the most active members of a small but influential group who in the last ten years largely under the stimulus of the Russian contributions to the Congress of the History of Science held in London in 1931, have made the history of science the vehicle through which to spread a modern version of the materialist interpretation of history and a kind of Neo-Marxist socialism. As a political force of some importance this is a comparatively new phenomenon in this country—although in the person of Mr. H. G. Wells it has probably produced the most influential single exponent of this view. It is, however, still surprising that the members of this movement should be under the illusion of being particularly modern and revolutionary in introducing to this country what for the past hundred years has been an intel- lectual force of decisive importance in most countries of Europe and particularly in Germany.

The first half of Mr. Crowther's book is a straightforward account of the history of science in antiquity and the middle ages. As such it is brilliantly done. Research of the last twenty years has given us an enormous amount of new knowledge, particularly on the state of science in pre-classical antiquity and during the Muslim period, and Mr. Crowther now gives us what I believe is the first connected non-technical account of these developments. It makes fascinating reading. The lucidity and terseness of the exposition deserve high praise, and the author's idiosyncrasies break through only rarely. It is perhaps somewhat startling to be told, on the slender evidence, that we do not know of serious warfare in the New Stone Age, that warfare was probably an urban invention, or that Greek individualism was a survival of the New Stone Age farmers. And the repeated assertions that this or that mental technique, from magic to generalised thinking, were " invented " to satisfy par- ticular social needs suggest a more simpliste interpretation of the author's basic tenets than one would expect from him.

The character of the book changes completely when it comes to the threshold of the modern age. It is not only that it becomes a somewhat disconnected and anecdotal, though interesting and instructive, selection of episodes, almost exclusively taken from the development of physics and chemistry and the connected techniques. But European civilisation since the Renaissance stands also for everything which the author hates most : individualism, commerce, abstract thinking and humanistic and literary educa- tion. And his judgements become accordingly, to say the least, peculiar. He is capable of quoting seriously the view that "the Reformation might be interpreted as a reaction of mediaeval busi- ness-men against investment in shrines and relics "; and "the Renaissance or re-birth of classical learning, was in effect a manoeuvre by the triumphant bankers and merchants to fortify their new ruling position with cultural defences." In modern times there is even less r 1m for disinterested search for truth. Maxwell, for example, whatever he may have believed himself, must in fact be interpreted as an "intellectual instrument of a development determined by the main social forces." As is so often the case this cultural determinism is combined with a somewhat uncertain attitude on the great issue of freedom of thought. While Mr. Crowther is ready enough to blame the forces he dislikes for any encroachment upon, intellectual freedom, his own views are by no means reassuring. I wish I had space to quote in full the characteristic paragraph on page 333. The gist is that Freedom and Inquisition may at different times each be beneficial to science—and that is all that matters. "Inquisition is beneficial to science when it protects a rising class" and "freedom is inimical to science when it assists reactionary elements to gain power." Therefore the scientist who wishes to enjoy freedom must choose the progressive side. But to know which is the progressive side requires political understanding and judgement. Hence "..the scientist must study politics."

It is curious that modern historians of science like Mr. Crowther seem to know so little about the history of the ideas which they themselves hold. If, for instance, he had known, more directly, instead of, as it seems, through the medium of Veblen, Aueuste Comte's use of the history of science and his views of "the social relation of science" (a Comtean phrase), Mr. Crow- ther might have seen more clearly to what sort of spiritual tyranny the views he holds tend to lead. And some further study of

nineteenth-century ideas (but, of course, ideas as such are con- temptible, and only members of the governing class are interested in ideas rather than things) might even have suggested to him that the State organisation of science in Germany which he admires so much is not altogether unconnected with the intel- lectual developments that have led to what from his point of view he somewhat inconsequently dismisses as the abomination