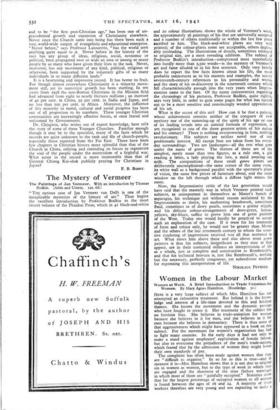 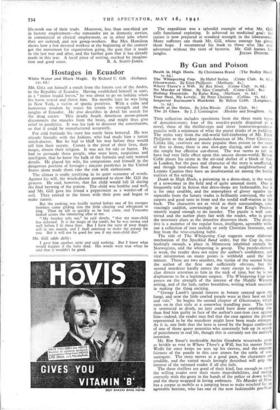 Women in the Labour Market

HERE is a very large subject of which Mrs. Hamilton has not attempted an exhaustive treatment. But behind it is the know- ledge and interest of a life-time devoted to this and kindred themes. She knows the movement and the dynamic persons who have fought to create it. Her treatment of the subject has no feminist bias. She believes in trade-unionism for women because she believes in it for men, and she believes in it for men because she believes in democracy. There is thus none of that aggressiveness which might have appeared in a book on this subject. For the movement for women's organisation has had to fight many enemies. In the early days it had not only to make a stand against employers' exploitation of female labour, but also to overcome the prejudices of the men's trade-unions, which feared that by the admission of women they might lower their own standards of pay.

The complaint has often been made against women that they are "difficult to organise." In so far as this is true—and in measure it is—Mrs. Hamilton shows that it is not due to original sin in women as women, but to the type of work in which they are engaged and the shortness of the time (before marriage) in which most of them are "gainfully occupied." Statistics show that far the largest percentage of occupied women to all women is found between the ages of 16 and 24. A majority of these workers therefore are very young and not expecting to make a

life-work out of their trade. Moreover, less than one-third are in factory employment—the remainder are in domestic service, in commercial or clerical employment, or in other jobs where they are isolated, and not group-workers. But Mrs. Hamilton shows how a few devoted workers at the beginning of the century got the movement for organisation going, the gain that it made in the last war and after, and the further gain that it has already made in this war. A lucid piece of writing, marked by imagina-