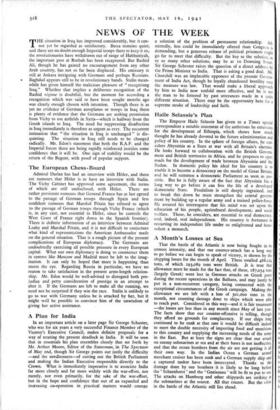 THE situation in Iraq has improved considerably, but it can- not yet be regarded as satisfactory. Basra remains quiet, and there are no doubt enough Imperial troops there to keep it so,. the revolutionaries have withdrawn out of range of Habbaniyah, the important post at Rutbah has been recaptured. But Rashid Ali, though he has gained no encouragement from any other Arab country, has not so far been displaced. His emissary is still at Ankara intriguing with Germans and perhaps Russians.

• Baghdad appears still to be in revolutionary hands. Stalin mean- while has given himself the malicious pleasure of "recognising Iraq." Whether that implies a deliberate recognition of the Rashid regime is doubtful, but the moment for according a recognition which was said to have been sought months ago was clearly enough chosen with intention. Though there is as yet no evidence of German aeroplanes or troops in Iraq there is plenty of evidence that the Germans are seeking permission from Vichy to use airfields in Syria—which is halfway from the Greek islands to Iraq. The need for suppressing disaffection in Iraq immediately is therefore as urgent as ever. The recurrent intimation that "the situation in Iraq is unchanged" is dis- quieting. The situation in Iraq still needs to be changed radically. Mr. Eden's statement that both the R.A.F. and the Imperial forces there are being rapidly reinforced justifies some confidence that it will be. One sign of stability would be the return of the Regent, with proof of popular support.