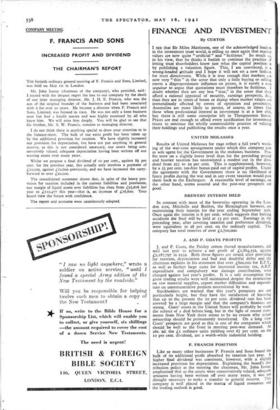 THE fortieth ordinary general meeting of F. Francis and Sons, Limited, was held on May 1st in London.

Mr. John Ismay (chairman of the company), who presided, said: I record with the deepest regret the loss to our company by the death of our joint managing director, Mr. J. H. E. Francis, who was the son of the original founder of the business and had been associated with it for over so years. He became a director when F. Francis and Sons, Limited, was formed in 1900. He was not only a keen business man but had a kindly nature and was highly esteemed by all who knew him. We will miss him deeply. You will be glad to see that his brother, Mr. S. W. Francis, remains as managing director.

I do not think there is anything special to draw your attention to in the balance-sheet. The bulk of our extra profit has been taken up by the additional provision for taxation. We have slightly increased our provision for depreciation, but have not put anything to general reserve, as this is not considered necessary, our assets being con- servatively valued, adequate depreciation having been written off our wasting assets over many years.

Whilst we propose a final dividend of so per cent., against 84 per cent. for the previous year, this actually only involves a payment of £so,000, against £10,600 previously, and we have increased the carry- forward to over £20,000.

The consolidated statement shows that, in spite of the heavy pro- vision for taxation included in the current liabilities and provisions, our margin of liquid assets over liabilities has risen from £93,676 last year to £550,477 this year—that is, an increase of £16,800. Your board view the future with confidence.