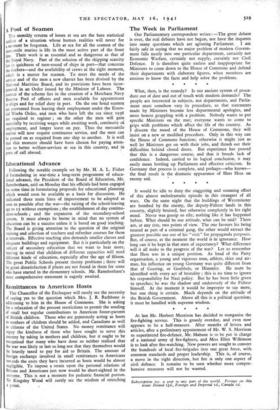 What, then, is the remedy? Is our ancient system of

proce- dure out of date and out of touch with modern demands? The people are interested in subjects, not departments, and Parlia- ment must somehow vary its procedure, so that statements made by Ministers become less departmental apologies, and more honest grappling with a problem. Nobody wants to put specific Ministers on the mat; everyone wants to come to grips with problems which affect the life of the country. As I discern the mood of the House of Commons, they will insist on a new or modified procedure. Only in this way can the House of Commons function; otherwise it might just as well let Ministers get on with their jobs, and thrash out their difficulties behind closed doors. But experience has proved that this is a dangerous course, and that it breeds lack of confidence. Indeed, carried to its logical conchision, it may easily mean bottling up Parliament and effective criticism. In Germany that process is complete, and perhaps—who knows— the final result is the dramatic appearance of Herr Hess on enemy soil.