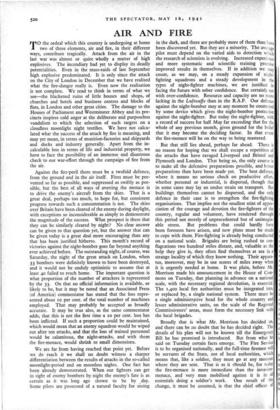 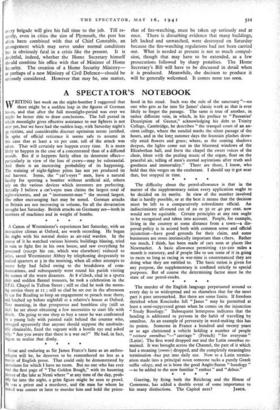 T0 the ordeal which this country is undergoing at home two of three elements, air and fire, in their different ways, contribute tragically. Attack from the air in the last war was almost or quite wholly a matter of high explosives. The incendiary had yet to display its deadly potentialities. Even in the mass-raids of last September high explosive predominated. It is only since the attack on the City of London in December that we have realised what the fire-danger really is. 'Even now the realisation is not complete. We tend to think in terms of what we see—the blackened ruins of little houses and shops, of churches and hotels and business centres and blocks of flats, in London and other great cities. The damage to the Houses of Parliament and Westminster Abbey and its pre- cincts inspires cold anger at the deliberate and purposeless vandalism to which the selection of such targets on a cloudless moonlight night testifies. We have not calcu- lated what the success of the attack by fire is meaning, and may yet mean, in terms of munition-factories and shipyards and docks and industry generally. Apart from the in- calculable loss in terms of life and industrial property, we have to face the possibility of an immense and disastrous check to our war-effort through the campaign of fire from the air.

Against the fire-peril there must be a twofold defence, from the ground and in the air itself. Fires must be pre- vented so far as possible, and suppressed as swiftly as pos- sible, but the best of all ways of averting the menace is to drive the enemy's aircraft from the skies. That is a great deal, perhaps too much, to hope for, but consistent progress towards such a consummation is not. The skies over Britain have been cleared of the enemy during daylight, with exceptions so inconsiderable as simply to demonstrate the magnitude of the success. What prospect is there that they can be similarly cleared by night? No clear answer can be given to that question yet, but the answer that can be given today is a great deal more encouraging than any that has been justified hitherto. This month's record of victories against the night-bomber goes far beyond anything ever achieved before. The outstanding night, of course, was Saturday, the night of the great attack on London, when 33 bombers were definitely known to have been destroyed, and it would not be unduly optimistic to assume that at least 40 failed to reach home. The important question is what proportion of the number of attackers is represented by the 33. On that no official information is available, or likely to be, but it may be noted that an Associated Press (of America) commentator has stated that the loss repre- sented about 10 per cent. of the total number of machines employed. That may probably be accepted as broadly accurate. It may be true also, as the same commentator adds, that this is not the first time a to per cent. loss has been inflicted. If such a proportion could be maintained, which would mean that an enemy squadron would be wiped out after ten attacks, and that the loss of trained personnel would be calamitous, the night-attacks, and with them the fire-menace, would shrink to small dimensions.

We are far from having reached that point yet. Before we do reach it we shall no doubt witness a sharper differentiation between the results of attacks in the so-called moonlight-period and on moonless nights. One fact has been already demonstrated. When our fighters can get in sight of enemy bombers by night the enemy's fate is as certain as it was long ago shown to be by _day. Some pilots are possessed of a natural faculty for seeing in the dark, and there are probably more of them than have been discovered yet. But they are a minority. The ave, age pilot must depend on the varied aids to detection which the research of scientists is evolving. Increased experience and more systematic and scientific training promise improved results in themselves. If in addition we may count, as we may, on a steady expansion of night. fighting squadrons and a steady development in the types of night-fighter machines, we are justified ia facing the future with sober confidence. But certainly not with over-confidence. Resource and capacity are no more lacking in the Luftwaffe than in the R.A.F. Our defence against the night-bomber may at any moment be countered by some device which gives the night-bomber protection against the night-fighter. But today the night-fighter, with a record of success for half May far exceeding that for the whole of any previous month, gives ground for the belief that it may become the deciding factor. In that event the fire-menace will be on the way to being mastered.

But that still lies ahead, perhaps far ahead. There is no reason for hoping that we shall escape a repetition of the attacks that have ravaged Liverpool and Bristol and Plymouth and London. That being so, the only course is to make all the defensive preparations possible, and better preparations than have been made yet. The best defence, where it means no serious check on productive effort, whether personal or industrial, is dispersal, though that in some cases may lay an undue strain on transport. But buildings themselves cannot be dispersed, and the only defence in their case is to strengthen the fire-fighting organisations. That implies not the smallest stint of appre- ciation of the courage and devotion the fire-fighters of the country, regular and volunteer, have rendered- through this period not merely of unprecedented but of unimagin- able stress. But problems that could hardly have been foreseen have arisen, and new plans must be made to cope with them. Fire-fighting is already being conducted on a national scale. Brigades are being rushed to con- flagrations two hundred miles distant, and, valuable as the help they give is, they often find themselves at sea in a strange locality of which they know nothing. Their appara- tus, moreover, may be in use scores of miles away when it is urgently needed at home. It was plain, before Mr. Morrison made his announcement in the House of Com- mons on Tuesday, that planning in advance on a national scale, with the necessary regional devolution, is essential. The 1,400 local fire authorities must be integrated into, or replaced by, a single national system. There must be a single administrative head for the whole country and lesser administrative units, on the scale of the Regional Commissioners' areas, must form the necessary link with the local brigades.

Broadly that is what Mr. Morrison has decided on and there can be no doubt that he has decided right. The details of his plan will not be known till the Emergency Bill he has promised is introduced. But from what he said on Tuesday certain facts emerge. The Fire Service is to be organised nationally, and the full-time firemen will be servants of the State, not of local authorities, which means that, like a soldier, they must go at any moment where they are sent. That is as it should be, for today the fire-menace is more immediate than the invasion - menace, and very man mobilised against it is in all essentials doing a soldier's work. One result of the change, it must be assumed, is that the chief officer of ev,‘ry brigade will give his full time to the job. Till re- cently, even in cities the size of Plymouth, the post has often been combined with that of Chief Constable, an arrangement which may serve under normal conditions but is obviously fatal in a crisis like the present. It is doubtful, indeed, whether the Home Secretary himself should combine his office with that of Minister of Home Security. The creation of a Home Security Ministry— or perhaps of a new Ministry of Civil Defence—should be seriously considered. However that may be, one matter, that of fire-watching, must be taken up seriously and at once. There is disturbing evidence that many buildings, left locked and unwatched, were destroyed on Saturday because the fire-watching regulations had not been carried out. What is needed at present is not so much compul- sion, though that may have to be extended, as a few prosecutions followed by sharp penalties. The Home Secretary's Bill will have to be discussed in detail when it is produced. Meanwhile, the decision to produce it will be generally welcomed. It comes none too soon.