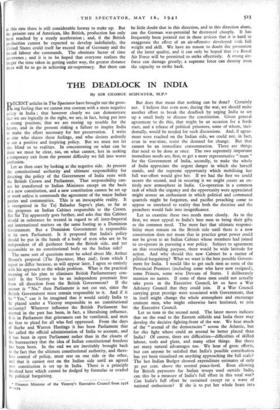 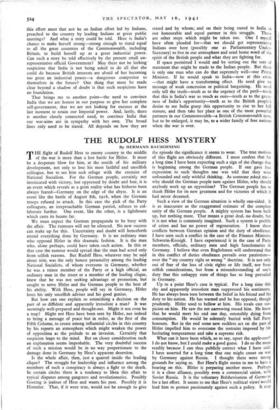 THE DEADLOCK IN INDIA

RDECENT articles in The Spectator have brought out the grow- ing feeling that we cannot rest content with a mere negative policy in India ; that however clearly we can demonstrate that we are logically in the right, we are, in fact, being put into a wrong position; that we are storing up trouble for the future, and in the present risking a failure to inspire India to make the effort necessary for her preservation. I write as one who shares these feelings, and who desires ardently to see a positive and inspiring policy. But we must not let this blind us to realities. In concentrating on what can be done we must be clear, too, on what cannot, lest in seeking a temporary exit from the present difficulty we fall into worse confusion.

Let us then start by looking at the negative side. At present the constitutional authority and ultimate responsibility for directing the policy of the Government of India rests with the British Crown and Parliament. That responsibility can- not be transferred to Indian Ministers except on the basis of a new constitution, and a new constitution cannot be set up or work unless it commands the agreement of the major Indian parties and communities. This is an inescapable reality. It is recognised in Sir Tej Bahadur Sapru's plan, so far as this proposes an Indian Cabinet responsible to the Crown. But Sir Tej apparently goes further, and asks that this Cabinet should in substance be treated in regard to all inter-Imperial and international matters on the same footing as a Dominion Government. But a Dominion Government is responsible to its own Parliament. Is it proposed that India's policy should be put in the hands of a body of men who are to be independent of all guidance from the British side, and yet responsible to no constitutional body on the Indian side?

The same sort of questions must be asked about Mr. Arthur Moore's proposal (The Spectator, May 2nd), from which I regret to differ because, as will appear later, I agree so entirely with his approach to the whole problem. What is the practical meaning of his plan to eliminate British Parliamentary con- trol? Is the Viceroy to be an independent potentate free from all direction from the British Government? If the answer is "No," then Parliament is not cut out, since the British Government must remain responsible to it. And if it be "Yes," can it be imagined that it would satisfy India to be placed under a Viceroy responsible to no constitutional authority? Whatever influence the British Parliament has exerted in the past has been, in fact, a liberalising influence. It is in Parliament that grievances can be ventilated, and men are free to plead for all who feel oppressed. From the days of Burke and Warren Hastings it has been Parliament that has called the official administration of India to account, and it has been in open Parliament rather than in the closets of the bureaucracy that the idea of Indian constitutional freedom has been born. In the end we are inevitably brought back to the fact that the ultimate constitutional authority, and there- fore control of policy, must rest on one side or the other, and that it cannot rest on the Indian side until an agreed new constitution is set up in India. There is a principle In‘ olved here which cannot be dodged by formulae or evaded by political bargaining.

* Finance Minister of the Viceroy's Executive Counci! from 1928 t° 1934. But does that mean that nothing can be done? Certainly not. I believe that even now, during the war, we should make another effort to break the deadlock by urging India to set up a small body to discuss the constitution. Given general agreement to do this, that might be an occasion for a fresh start, and a release of political prisoners, some of whom, inci- dentally, would be needed for such discussions. And, if agree- ment were reached on the Indian side, we could not, in fact, even in war-time, resist the demand for change. But that cannot be an immediate consummation. There are things that need to be done at once. The two supremely important immediate needs are, first, to get a more representative " team " for the Government of India, secondly, to make the whole of India appreciate the urgent danger in which she herself stands, and the supreme opportunity which mobilising her full war-effort would give her. If we had the first we could secure the second, and in securing it we might create an en- tirely new atmosphere in India. Co-operation in a common task of which the urgency and the opportunity were appreciated might arouse an enthusiasm in which political and communal quarrels might be forgotten, and pacifist preaching come to appear so unrelated to reality that both the doctrine and the preachers would fade into insignificance.

Let us examine these two needs more closely. As to the first, we must appeal to India's best men to bring their gifts to the common need. The mere fact that ultimate responsi- bility must remain on the British side until there is a new constitution does not mean that in practice great power could not be given to an Indian Cabinet whose members had joined to co-operate in pursuing a war policy. Subject to agreement on that overriding purpose, there would be wide latitude for action. And why should this new Cabinet be a matter of political bargaining? What we want is the best possible Govern- ment for India. I would like to get such men as some of the Provincial Premiers (including some who have now resigned), some Princes, some wise Dewans of States. I deliberately mention no names. If some of these men could not actually take posts in the Executive Council, let us have a War Advisory Council that they could join. If a War Council carrying great prestige were associated with Government, that in itself might change the whole atmosphere and encourage eminent men, who might otherwise have hesitated, to join the Executive Council.

Let us turn to the second need. The latest moves indicate that on the road to the Eastern oilfields and India there may develop the decisive fighting-front of the war. We hear much of the "arsenal of the democracies" across the Atlantic, but for this fight where could an arsenal be better placed than India? Of course, there are difficulties—difficulties of skilled labour, tools and plant, and many other things. But there are many natural advantages too. We hear of great efforts, but can anyone be satisfied that India's possible contribution has yet been visualised on anything approaching the full scale? The last Indian Budget showed expenditure estimates of only 30 per cent. above the normal peace-level. Even allowing for British payments for Indian troops used outside India, can this be a measure of India's full effort in this total war? Can India's full effort be sustained except on a wave of national enthusiasm? If she is to put her whole heart into this effort must that not be an Indian effort led by Indians, preached to the country by leading Indians at great public meetings? And what a story could be told. Here is India's chance to make herself strong—strong enough to stand equal to all the great countries of the Commonwealth, including Britain, to build herself up as a great industrial power. Can such a story be told effectively by the present small un- representative official Government? May there not be lurking' suspicions that India is not being asked to do all that she could do because British interests are afraid of her becoming too great an industrial power—a dangerous competitor to themselves in the future? One thing that must be made clear beyond a shadow of doubt is that such suspicions have no foundation.

That brings me to another point—the need to convince India that we are honest in our purpose to give her complete self-government, that we are not looking for excuses at the last moment to retain our Imperial power. And, lastly, there is another closely connected need, to convince India that our war-aims are in sympathy with her own. The broad lines only need to be stated. All depends on how they are stated and by whom; and on their being stated to India as our honourable and equal partner in this struggle. There are other steps which might be taken too. One I myself have often pleaded for—that we should get representative Indians over here (possibly one as Parliamentary Under.. Secretary)to live in our atmosphere and send home word of the spirit of the British people and what they are fighting for.

If space permitted I would end by setting out the sort of statement that might be made to the Indian people. But there is only one man who can do that supremely well—our Prime Minister. If he would speak to India—now at this crisis —that might have a transforming effect. He need give no message of weak concession or political bargaining. He need only tell the truth—truth as to the urgency of the peril—truth that this is India's war as much as ours—truth as to the great- ness of India's opportunity—truth as to the British people's desire to see India grasp this opportunity to rise to her full stature, and then take her place as one of the most powerful partners in our Commonwealth—a British Commonwealth now, but to be enlarged, it may be, to a wider family of free nations when the war is over.