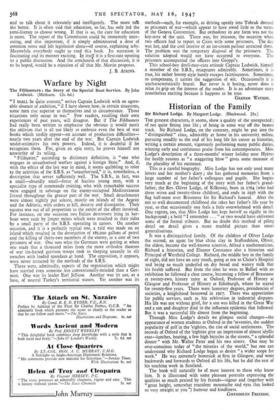 Warfare by Night The Filibusters : the Story of the

Special Boat Service. By John Lodwick. (Methuen. 12s. 6d.) " I sliALL be quite content," writes Captain Lodwick with an agree- able absence of ambition," if I have shown how, in certain situations, some men rise superior to themselves and to circumstance. Those situations only occur in war." Few readers, recalling their own experiences of past years, will disagree. But if The Filibusters had really been written to emphasise the obvious it would merit the oblivion that is all too likely to embrace even the best of war books which tardily appear—on account of production difficulties— nearly two years after the end of the war. But Captain Lodwick under-estimates his own powers. Indeed, it is doubtful if he recognises them. For, given an epic story, he proves himself not unworthy of its telling.

" Filibuster," according to dictionary definition, is " one who engages in unauthorised warfare against a foreign State." And, if, with the ethics of the last war in mind, it seems quibbling to refer to the activities of the S.B.S. as "unauthorised," it is, nonetheless, a description that serves sufficiently well. The S.B.S., in fact, was a small—absurdly small—force of fearless young men, with a specialist type of commando training, who with remarkable success were engaged in sabotage on the enemy-occupied Mediterranean littoral throughout the greater part of the war. Small detachments were almost nightly put ashore, mostly on islands of the Aegean and the Adriatic, with orders to kill, destroy and disorganise. Their success was out of all proportion to the extent of the effort involved. For instance, on one occasion two Italian destroyers lying in har- bour were sunk by limpet mines which were attached to their sides by a small party of the S.B.S. operating in canoes. On another occasion, and it is a perfectly typical one, a raid was made on an island which resulted in the destruction of 165,000 gallons of petrol and the killing of thirty-two members of the enemy, at a cost of two prisoners of war. One sees what the Germans were getting at when one reads that a thousand miles from the more orthodox theatres of war tin-hatted garrison troops took to sleeping uneasily in slit trenches with loaded spandaus at hand. The opposition, it appears, were never attracted by the methods of the S.B.S. There were, admittedly, aspects of the organisation which might have startled even someone less conventionally-minded than a Ger- man. One was its leader Earl Jellicoe. Another was its use, as a base, of neutral Turkey's territorial waters. Yet another was its methods—such, for example, as 'driving openly into Tobruk dressed as prisoners of war—which appear to have owed little to the terms of the Geneva Convention. But orthodoxy in any form was not the key-note of the unit. There was,' for instance, the occasion when two officers had to report to Cairo with some prisoners. The day was hot, and the cool interior of an ice-cream parlour attracted them. The problem was the temporary disposal of the prisoners. The solution adopted would not have occurred to everyone. The prisoners accompanied the officers into Groppi's.

This school-boy devil-may-care attitude Captain Lodwick, himself a member of the S.B.S., recaptures admirably. Sometimes, it is true, his rather breezy. style barely escapes facetiousness. Sometimes, to compensate, it carries the suggestion of wit. Occasionally it is uncharacteristically brutal. But never is it boring, never does it relax its grip on the interest of the reader. It is an adventure story nonetheless exciting because it happens to be true.