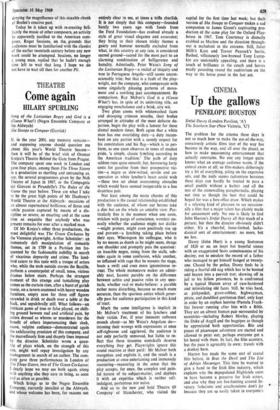 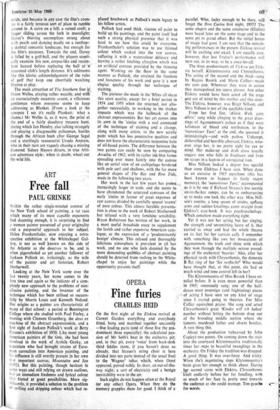 Sinful Davey (London Pavilion, 'A') The Southern Star (New Victoria, 'U') The problem for the cinema these days is not so much how to make the out-of-the-way, consciously artistic films (out of the way has become in the way, and all over the place), as how to make unassuming entertainment that actually entertains. No one any longer quite knows what an average audience wants, if the animal exists at all; so film-makers ditheringly try a bit of everything, piling on the expensive sets, and the nude scenes (adventure heroines these days can hardly be trusted to pass a small puddle without a bathe), and all the rest of the stonewalling paraphernalia, playing out time as though the best that could be hoped for was a box-office draw. Which makes it a relaxing kind of pleasure to see occasion- ally a film that a major talent has plainly made for amusement only. No one is likely to find John Huston's Sinful Davey all that much of a picture; but then the director obviously didn't either. It's a cheerful, loose-limbed, lacka- daisical sort of entertainment: no more, but no less.

Davey (John Hurt) is a young Scotsman of 1820 or so, an inept but hopeful sinner with an exaggerated Scots consciousness of his destiny, out to emulate the record of a father who managed to get himself hanged at twenty- one. Chased by the police, Davey finds he is riding a fearful old nag which has to be booted and beaten into a peevish trot; showing off in jail to his fellow prisoners, he is confronted by a typical Huston array of case-hardened and intimidating old faces. Still, he tries hard, as pickpocket, grave-robber, highwayman, pirate, and dandified gentleman thief, only kept in order by an orphan heroine (Pamela Frank- lin) forever running after him with a Bible. They are an almost human pair surrounded by eccentrics—including Robert Morley, playing the Duke of Argyll and the bagpipes as though he appreciated both opportunities. Bits and pieces of picaresque adventure are started and allowed to peter out; perhaps everyone got a bit bored with them. In fact, the film saunters, but the pace is agreeably its own: travels with a donkey hero. Huston has made the same sort of casual film before, in Beat the Devil and The List of Adrian Messenger. This time he wanted to give a hand to the Irish film industry, which explains why the depopulated Highlands seem to have become a preserve for Irish actors, and also why they are fox-hunting around In- verary. Solecisms and anachronisms don't jar because they are so easily taken in everyone's

stride, and because in any case the film's coun- try is a fairly tenuous sort of place to ramble around in. A cairn on a hill; a ruined croft; a lugger sliding across the loch in moonlight; Davey's thieving accomplices strung about with pearls and dancing madly on a rooftop: a skeletal romantic landscape, but enough for the film's purposes. Towards the end, Davey is felled by a golf-ball, and the players scepti- cally examine this new, corpse-like and recum- bent hazard before replacing the ball at u measured club's length distance. It's oddments like this idiotic acknowledgement of the rules of golf that keep one cheerfully watching Huston at play.

The main attraction of The Southern Star Orson Welles. playing rather wearily, and with an excruciatingly eccentric accent, a villainous gentleman whom everyone seems to keep addressing as Blanket. (From a look at the synopsis I see it's really Plankett: what a shame.) Mr Welles is, as it were, the prize at the end of a fairly desultory treasure hunt, during which Ian Hendry, also talking strangely and playing a disagreeable policeman, bustles through the African bush after George Segal and a startlingly resourceful Ursula Andress, who in their turn are vaguely chasing a missing diamond. Sidney Hayers directs, in true Afri- can adventure style: when in doubt, wheel out the wild life.