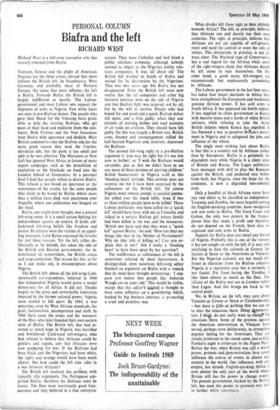 Biafra and the left

Richard West is a left-wing journalist who has recently returned from Biafra.

Vietnam, Greece and the plight of American Negroes are the three causes abroad that most inflame the British left. In Scandinavia, West Germany and probably most of Western Europe, the cause that most inflames the left is Biafra. Towards Biafra the British left is largely indifferent or hostile. The Lkbour government and most Labour MPS support the shipment of arms to Nigeria. Few white faces are seen in pro-Biafran demos. The people who gave their blood for the Vietcong have given little to help the starving Biafrans, who get most of their food and medicine from the con- tinent. Both Tribune and the New Statesman treat Biafra with ignorance and disdain. Most British communists take the Biafran side.for the same good reason they took the Czecho- slovakian side, but the party is too small and split to be very effective. The Marcusist or New Left has ignored West Africa in favour of more urgent campUigns such as the demolition of capitalism or the blockade on food into the London School of Economics. At a personal level I find that people refuse to discuss Biafra. This refusal is not based on ignorance or the remoteness of the events, for the same people who claim to be bored by Biafra, where more than a million have died, wax passionate over Anguilla, where one policeman was banged on

the head. • Biafra, one might have thought, was a natural left-wing cause. It is a small nation fighting for independence against an empire. It holds old- fashioned left-wing beliefs like freedom and justice. Its citizens were the victims of an appal- ling massacre. Lord Byron espoused the Greeks for just these reasons. Yet the left, either de- liberately or by default, has taken the side of the British and Russian governments, the in- ternational oil consortiums, the British cocoa and soap companies. The reason for this, as far as I can make out, is misconception about Nigeria.

The British left, above all the left-wing Com- monwealth correspondents, believed in 1960 that independent Nigeria would prove a model democracy for all Africa. It did not. Thanks largely to the gross and unworkable federation imposed by the former colonial power, Nigeria soon started to fall apart. By 1964, it was notorious, even by West African standards, for graft, factionalism, incompetence and sloth. In 1966 there came the coups and the massacre of the Ibos, who later founded their own eastern state of Biafra. The British left, that had in- vested so much hope in Nigeria, was horrified and bewildered. Cock-eyed left-wingers, who bad refused to believe that Africans could be grafters and rogues, saw that Africans were now preparing for war. If the Biafrans had been black and the Nigerians had been white, the rights and wrongs would have been much clearer. But how could the left take sides in a war between Africans? • The British left resolved this problem with typically silly arguments. The Portuguesi sup- ported Biafra; therefore the Biafrans must be fascist. The Ibos were notoriously good busi- nessmen and they believed in a free enterprise system. They were Catholics and had hired a public relations company, although nobody seemed to object to the Nigerian public rela- tions companies. It was 'all about oil.' The British left washed its hands of Biafra and waited for its destruction by the Nigerians. That was two years ago but Biafra has not disappeared. Even the British left must now realise that the oil companies and other big business interests were on the side of Nigeria and that Biafra's fight was inspired, not by oil, but by the will to survive. People who had hoped for and predicted a quick Biafran defeat felt upset, and a little guilty, when they saw pictures of starving babies and read accounts of air raids on civilians. They should have felt guilty, for this was largely a British war. British arms, finance and encouragement rallied the half-hearted Nigerians and, inversely, depressed the Biafrans.

The normal left-wing reply to a pro-Biafran argument is 'you may be right but it's too late now to bother,' or 'I wish the Biafrans would surrender, just so that .we didn't have to see any more of those pictures of starving children.' British businessmen in Nigeria scoff at this 'bleeding heart' attitude. This attitude does not surprise me but I have been surprised by the callousness of the British left. 'Of course Nigeria must remain united,' a socialist journa- list yelled over the lunch table, 'even if two or three million people have to be killed.' Those Labour politicians who have called for a 'quick kill' should have been with me in Umuahia and talked to a certain Biafran girl whose family had been killed in the war and the massacres. 'British MPs have said that they want a "quick kill" against Biafra,' she said. 'How can they say things like that in the Mother of Parliaments? Why do they talk of killing us? Can you ex- plain that to me?' Am I really a 'bleeding heart' to have been upset by her question?

The indifference or callousness of the left is sometimes relieved by sheer fatuousness. A distinguished, even notorious left-wing editor finished an argument on Biafra with a remark bathe must have thought devastating: 'I sup- pose you realise that people like Aubermf Waugh are on your side.' This would be risible, except that this editor's journal is thought to have some influence on a government which, backed by big business interests, is promoting a cruel and pointless war.

What divides left from right in their attitude towards Africa? The left, in principle,-believes that Africans can and should run their own countries. The right, in principle, believes that Africans are not yet capable of self-govern- ment and need the control or even the rule of whites. This distinction, in practice, is not al- ways clear. The Macleod type of Conservative has a real regard for the African while some of the right-wingers think that Africans should be left alone to ruin themselves. On the other hand, a good many left-wingers are unconsciously but unpleasantly patronising to Africans.

The Labour government in the last four years has taken four major . decisions in Africa that have strengthened the Europeans and weakened genuine African power. It has sold arms to South Africa: It has appeased the Smith regime. It has supplied its client government in Kenya with massive loans and a horde of white British advisers, while refusing to take the Asian British citizens, whom Kenya has expelled. It has financed a war to preserve Britain's invest- ment in Nigeria and to safeguard the jobs and influence of the whites.

The single most striking fact about Biafra is that this is .a country run by Africans rather than by Europeans. Biafra is a genuinely in- dependent state while Nigeria is a client state of Britain and Russia. The Lagos politicians have managed with skill to play the Russians against the British, and pocketed nice bribes from both, but Nigeria, once the hope for the continent, is now a degraded neo-colonial state.

Only a handful of black African states have any real claim to be classified as independent. Tanzania and Zambia, the most hopeful among the English-speaking countries, have recognised and sent arms to Biafra. The Ivory Coast and Gabon, the only two powers in the franco- phone bloc that make a profit and therefore do not depend on the French, have also re- cognised and sent, arms to Biafra.

Support for Biafra does not entail any hatred of Nigeria. Probably this is one of the reasons it has not caught on with the left. It is easy and satisfying to hate the colonels in Greece, the fascists in Spain or the Americans in Vietnam. But the Nigerian colonels' are not much dif- ferent in character from the Biafran colonels. Nigeria is a repressive state but it certainly is not fascist. Far from hating the Yorubas, I like them -almost as .much . as .theAbos- The villains of the Biafra war are in London rather than Lagos. And this brings me back to the central point. We, in Britain, on the left, may care about Vietnam Qf Greece or Spain or Czechoslovakia —but there is little-or nothing that we can do to alter the situations there. Many demonstra- tors, I think, do not really want to chatig? the situations there. Some of the protests against the American intervention in Vietnam have served, perhaps even deliberately, to strengthen popular feeling for the Americans. They are rituals, irrelevant to the stated cause, just as Gul, Fawkes's night is irrelevant to the Papist Peril. Before the war, when Britain was still a world power, protests and_demonstrations here could influence the course of events in almost any country in the world. Our influence, with our empire, has shrunk. English-speaking Africa is now almost the only part of the world where Britain still has the power to change eirefits. The present government, backed by the British left, has used this power to promote war and to further white quoremacy.